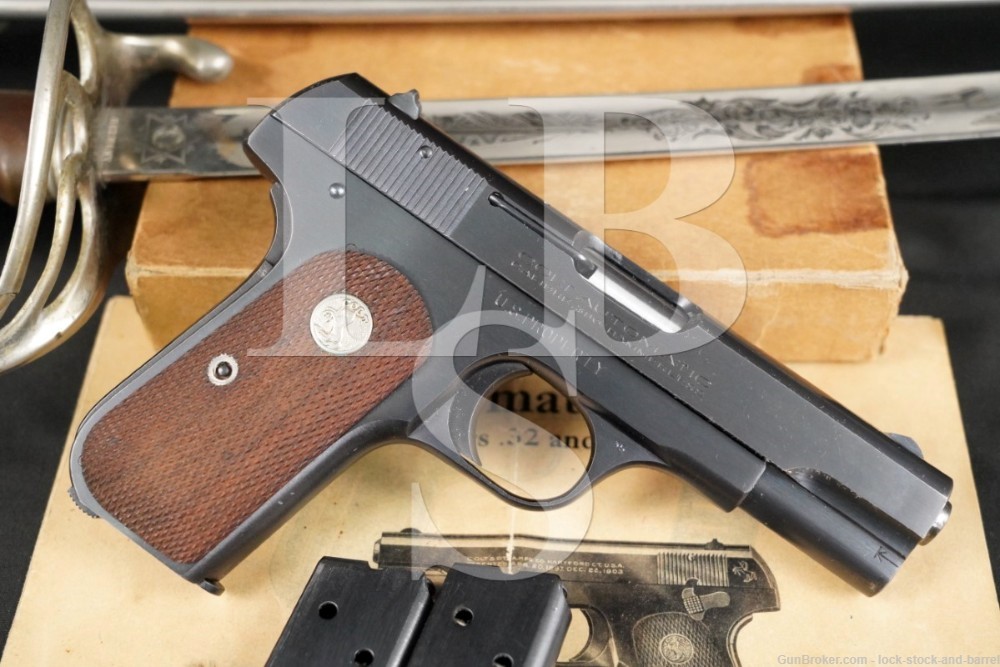 Sights / Optics: The front sight is a short blade fixed to the top of the slide with a serrated, ramped rear face. The rear sight is a square notch dovetailed into the rear of the slide.

Stock Configuration & Condition: The grips are checkered walnut with silver-colored Rampant Colt medallions at the tops of the grips. The grips show minor handling wear with some verdigris at the edges of the medallions. The checkering is generally sharp. There are no chips or cracks. Overall, the grips are in Fine-Excellent condition.

Overall Condition: This handgun retains about 97% of its metal finish. The finish is lightly thinning at some edges. There are a few minor scratches and nicks, most notable on the left slide flat near the front and on the frontstrap. The action shows minor operational wear. The screw head is tool marked with a strong slot. The markings are clear. Overall, this pistol is in Fine-Excellent condition.

Mechanics: The action functions correctly and the slide is tight to the frame. It has a grip safety, a manual safety and a magazine disconnect. The safety is designed to be used to lock the slide back or forward. We did not fire this handgun. As with all used firearms, a thorough cleaning may be necessary to meet your maintenance standards.

Box, Paperwork & Accessories: This pistol comes in a two-piece cardboard Kraft box with the serial number hand-written on the bottom, a total of three 7-round magazines, a manual and a Model 1902 Army Officer’s Sword and scabbard. The sword has a proof mark, “GERMANY”, William H. Horstmann Company maker’s mark and decorative etching including American Eagle and “E PLURIBUS UNUM” on one side, “REMI P HUEPER” on the other.

Our Assessment: The Colt Model 1908 Pocket Hammerless is a semi-automatic pistol designed by John Browning, and was the 2nd of the Colt concealed hammer models, following the Model 1903. Despite the title ‘Hammerless’, the M1903 and M1908 pistols do have a hammer, which is covered and hidden from view under the rear of the slide. This allowed the weapon to be carried in and withdrawn from a pocket quickly and smoothly without snagging. These pistols were popular civilian firearms for much of their life, and also served as United States General Officer pistols from the 1940s until their replacement by the M15 General Officers pistol in the 1970s.

This example was consigned with us by the grandson of Brigadier General Remi Paul Hueper and includes the pistol, three magazines, a box and General Hueper’s sword. According to publicly available information, General Hueper enlisted in the US Navy and served with that branch from 1912-1933. In 1917, he was commissioned as a Captain in the United States Army in the Quartermaster Corps. In 1920, he joined the Finance Department when it was first formed and continued there until 1946. He rose to the rank of Assistant Chief of Finance and briefly served as the Acting Chief of Finance starting 14 June, 1945, managing the sinews of war between the declarations of Victory in Europe and Victory in Japan. His decorations include the Army Distinguished Service Medal, WWI Victory Medal, American Defense Service Medal, American Campaign Medal, and World War II Victory Medal.

This pistol is in Fine-Excellent overall condition with 97% of its original blue finish remaining. The bore is bright with sharp rifling. This model is highly collected and should be of interest to the Colt connoisseur or the US Military arms collector, adding to even the most advanced collections with its included sword and box. Please see our photos and good luck!