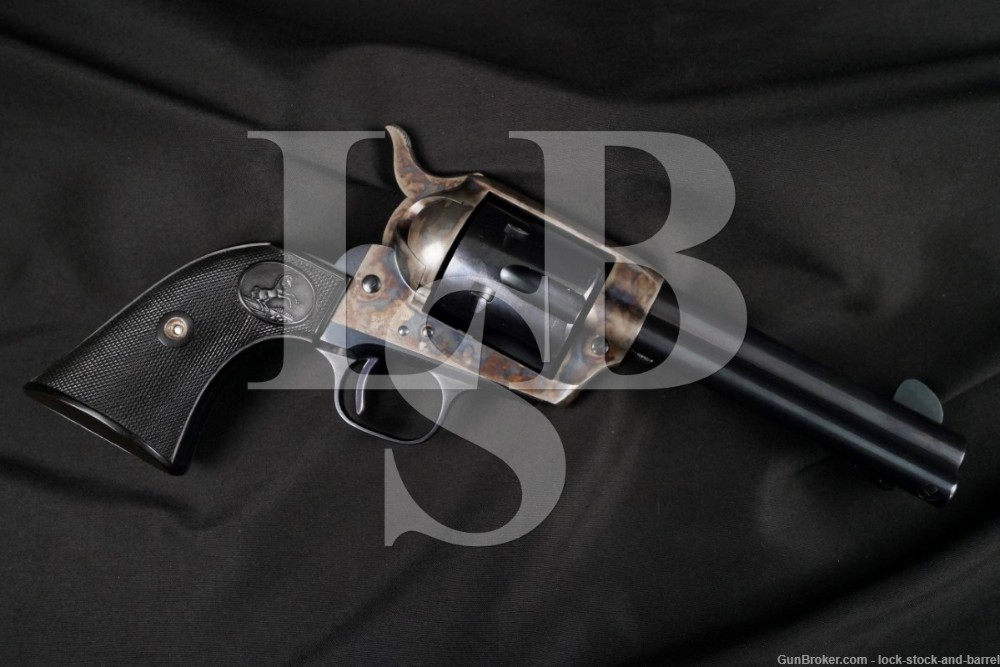 Stock Configuration & Condition: The grips are two-piece checkered black hard rubber with rampant colt in oval at the top of each panel. The grips have no notable wear or damage, only light handling marks. The checkering is well defined. There are no chips or cracks. Overall, the grips are in Excellent condition.

Finish Originality: The finish appears Original. It is possible that the additional assembly number on the loading gate and cylinder indicate return to the Colt factory for some sort of service or repair.

Bore Condition: The bore is mostly bright with sharp rifling. There is some minor erosion in the bore at the muzzle-end.

Overall Condition: This revolver retains about 95% of its metal finish. The finish is thinning at most edges. The blued finish is generally strong throughout with a few light marks, most notable a couple of spots on the left of the trigger and a light scratch on the cylinder near the front between two of the flutes. The frame and hammer’s case color is still strong with some very minor oxidation, mostly on the left recoil shield and the right of the frame below the cylinder, blending well with the case color pattern. The action shows very minor operational wear, most on the side faces of the hammer. The screw heads are sharp. The markings are clear. Overall, this revolver is in Fine condition.

Box, Paperwork & Accessories: This revolver comes with a Colt Historian letter which shows that this revolver shipped November 8, 1921 to Belknap Hardware & Mfg. Co. in Louisville, Kentucky as one of three guns of the same type in the shipment.

Our Assessment: Colt’s Single Action Army is, perhaps more than any other, an iconic American pistol. It was the U.S. issue sidearm for the last two decades of the 19th century, used by pioneers, outlaws and lawmen across the expanding nation, and captivated audiences on the silver screen and television (and still does, today). Produced for nearly a century and a half, they are still being made, today! This example is a 1st Generation Single Action Army made in 1921. It is in Fine condition, retaining the vast majority of its finish, a nice bore, and excellent mechanics. The condition really is quite nice given that the gun is more than 100 years old, though there is an extra set of assembly numbers on the loading gate and cylinder, which may indicate that it returned to the Colt factory at some point. The revolver originally shipped to Belknap Hardware & Mfg. Co. in Louisville, Kentucky. Founded in 1840, the company was a staple of the burgeoning city, and was a competitor to even the behemoths of Sears and Montgomery Ward in its time. Any 1st Generation SAA would make a great addition to a Colt collection, and this early 20th Century example should be no exception. Please see our photos and good luck!