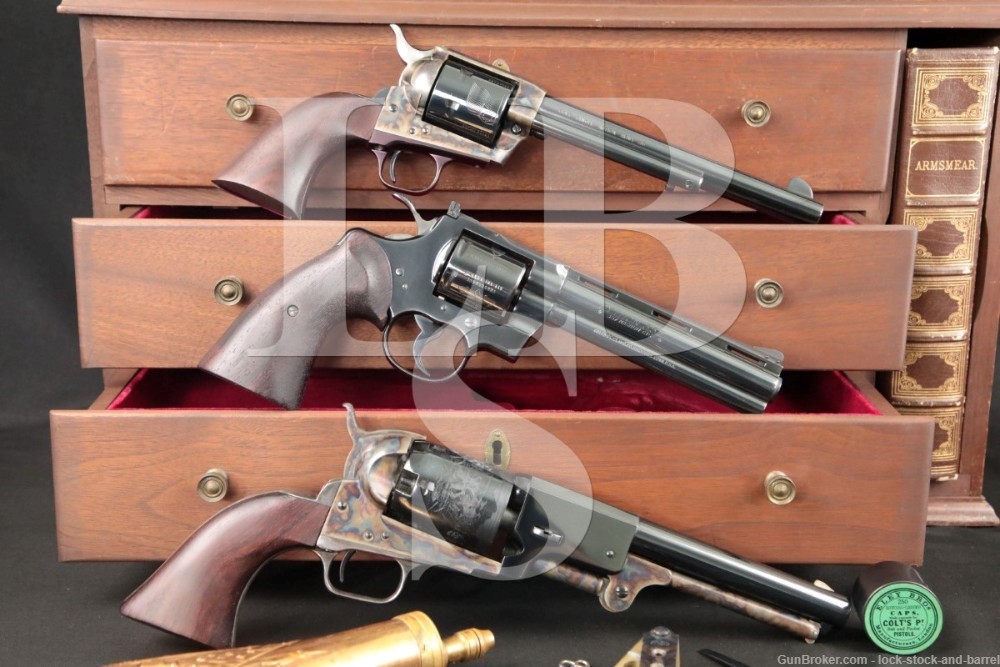 Stock Configuration & Condition: Each revolver has walnut grips with the United States Seal on the left. The Dragoon and Single Action Army have one-piece grips, the Python has two-piece grips.

The SAA’s grip has a small nick at the bottom edge of the medallion and a few other scattered minor marks. There are no chips or cracks. The SAA’s grip is in Fine-plus condition.

Dragoon: This revolver retains about 97% of its metal finish. The silver plate on the grip frame has darkened but should polish up bright. There are a couple little marks through the finish on the left frame flat above the hammer screw. The cylinder has a very faint turn-line, not through the finish. The screw heads are sharp. The markings are clear. Overall, this revolver is in Fine-Excellent condition.

Single Action Army: This revolver retains about 98% of its metal finish. There are a couple light marks through the finish on the cylinder near the stop notches. The trigger guard has a notable plum hue. Otherwise, there are only light handling marks. The screw heads are sharp. The markings are clear. Overall, this revolver is in Fine-plus condition.

Python: This revolver retains about 98% of its metal finish. There are a few light marks on the bottom of the trigger guard. Otherwise, there are only light handling marks. The screw heads are sharp. The markings are clear. Overall, this revolver is in Fine-Excellent condition.

Box, Paperwork & Accessories: The Original Factory Wood Three-Drawer case is included. Each drawer is velvet lined and has a lock, the key is included. The Dragoon’s drawer includes a powder flask, bullet mold, cap tin and nipple wrench. Also in the case is a leather-bound book, marked “ARMSMEAR” on the spine. This book is “The Home, the Arm, and the Armory of Samuel Colt. A Memorial.” The case has some scattered light storage wear, most notable on the feet and a crack at the right-front of the top piece of the case.