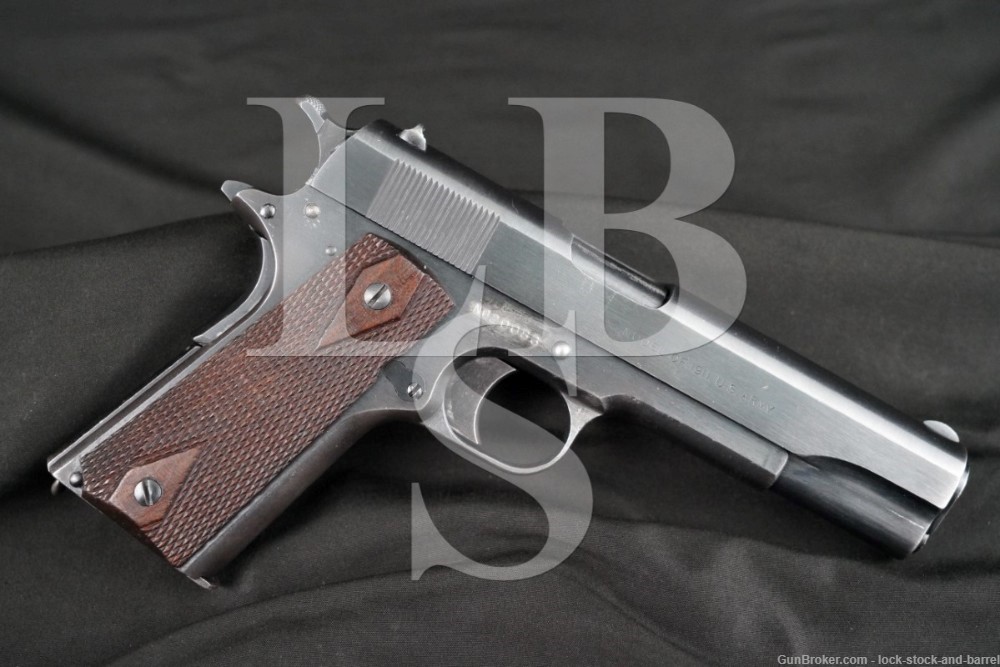 Sights / Optics: The front sight is a rounded blade fixed to the front of the slide. The rear sight is a “U”-notch with a flat top dovetailed into the rear of the slide.

Stock Configuration & Condition: The grips are two-piece checkered double-diamond wood panels with 14-15 checkers between the points of the diamonds. The grips have minor handling wear with only a few individual compressed checkers, most on the left panel, and a few light marks in the smooth diamonds. The checkering is mostly sharp. There are no chips or cracks. Overall, the grips are in about Fine condition as not original to the gun.

Overall Condition: This handgun retains about 90% of its metal finish. Finish is thinning at most edges. There is scraping on the right-front of the trigger guard, handling wear in the fronstrap, light operational wear and some scattered light scratches, nicks and scuffs including a very faint “idiot mark” under the slide stop. The surfaces show infrequent and very light surface oxidation, mostly on the bottom and front of the frame. The serial number is marked through the finish, as all Remington UMC 1911 serial numbers were, with light wear around the marking, typical of these pistols. The screw heads are lightly tool marked with strong slots. The markings are mostly clear, the eagle head inspection stamps on the trigger guard and rear of the slide may require magnification to read. Overall, this pistol is in about Very Good-Fine condition.

Mechanics: The action functions correctly. The pistol has a grip safety as well as a frame mounted manual safety and a half-cock safety on the hammer. We did not fire this handgun. As with all used firearms, a thorough cleaning may be necessary to meet your maintenance standards.

Box, Paperwork & Accessories: This pistol comes with a single 7-round magazine with a pinned floorplate, two-tone finish with the top in the white and the bottom blued. The magazine has light operational wear, scattered minor surface oxidation, some very shallow denting on the right, intact feed lips and a strong spring, in about Good-Very Good condition.

Our Assessment: The Great War’s end surprised many, but it surprised Russia first. After funding construction of a 1.6 million square foot factory sprawling over 75 acres for Remington UMC to produce rifles for Russia, communist radicals smuggled back into Russia by the Germans combined with the savage toll the war had taken on the nation and revolution swept across Russia, pulling them out of the war…just as America was joining it. The U.S. government purchased the Russian owned machines and set Remington to manufacturing machineguns, flare guns, Pedersen devices and 1911 pistols. In December of 1917 150,000 pistols were ordered, but tooling up was delayed as Colt didn’t have drawings for the design, no set of master gauges, and no model pistol. The first drawings Colt sent had no specified tolerances, the second set had 430 discrepancies when compared to the first, Remington had to make their own drawings. They acquired several Colt production pistols, five of which were all parts-interchangeable with one another, then took their own measurements with the average of the measurements used for nominal and the variance used for tolerance. Despite the failure of Colt to be of any help, Remington UMC was able to create their own drawings, tool up, and have pistols coming off their production line by August of 1918! Before they had even gotten the pistol into production, the order was increased from 150,000 to 500,000 pistols. Production ramped up to more than 1,000 pistols per week by November 1918…when the armistice was signed and the war came to a close, shocking the Allied nations who were preparing for a total war that might last another four years, maybe more. Remington UMC production continued in fits and starts through May of 1919 with a total of 21,676 pistols made before the U.S. Ordnance Department rounded up all the tooling they had bought and emptied out the Bridgeport plant. This is one of the later production guns shipped in February of 1919. It is in about Very Good-Fine condition with about 90% of its original finish remaining, a fantastic bore, and strong mechanics. Apart from the grips which appear to be of the Colt type, the markings and features are correct for a late-production Remington UMC 1911. Between the fascinating story of Remington’s production, the comparative rarity of the Remington pistols and this gun’s high condition, this is a great pistol for a WWI small arms or 1911 specific collection. Please see our photos and good luck!