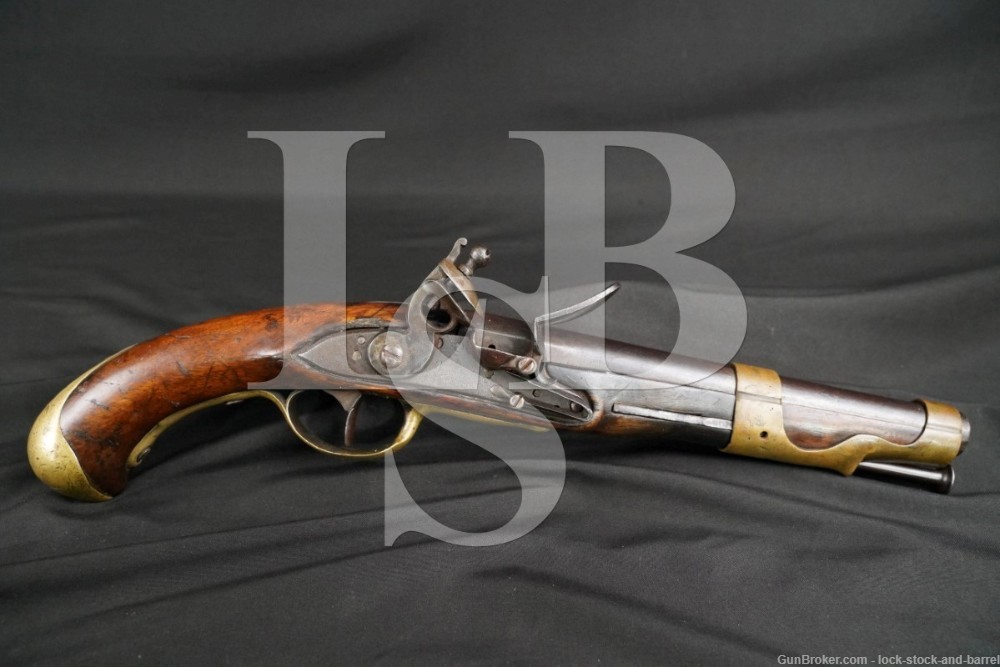 Stock Configuration & Condition/ Grip: The stock features a brass nose-cap secured by a spring, a provision in the forend for a ramrod, a lock-plate opposite a side-plate and a pistol grip with a brass cap.  The stock has some light-moderate handling marks, nicks and scuffs. Notably, there is a patch repair at the middle of the forend, there is a patch repair above the lock-plate between the hammer and pan, a small ding behind the hammer and scattered light compressions concentrated on the grip. Overall, the stock is in Very Good condition for an Antique.

Bore Condition: The bore is dark and coated in moderate erosion throughout.

Overall Condition: The pistol retains about 3% of its metal finish. The brass parts are mostly tarnished, coated in light surface oxidation and there are a few spots of verdigris. The bright parts are coated in light surface oxidation and have taken a patina color. There are some light handling marks, nicks and scuffs. Some of the markings appear to have faded with oxidation, but most remain clear. The screwheads are lightly tooled and remain serviceable. Overall, the pistol is in Very Good condition.

Mechanics: The spring that secured the nose-cap is damaged. Otherwise, the action functions correctly. We have not fired this pistol. As with all used firearms, a thorough cleaning may be necessary to meet your maintenance requirements.

Our Assessment: The Pistolet Modèle 1763/66 is a cavalry pistol. The gun was designed following France’s bitter defeat in the Seven Years War when a modernization effort was pursued by Etienne Francois, Marquis de Stainville, Duc de Choiseul (commonly referred to by his title Duc de Choiseul) during the reign of Louis XV. The gun would enter service in 1763 and remain in use until the beginning of the 19th century, although it was superseded by several other designs well before it was retired.

This particular pistol’s markings indicate it was made in 1775, during the epoch of the American Revolutionary War (1775-1791). During the conflict, France eventually landed forces in North America to support the revolutionaries against Britain and supplied them with modern French Arms. This pistol was made around the beginning of the conflict in 1775 when one of the first engagements of the war occured, the Battles of Lexington & Concord. While we are unsure where this pistol was used (French military equipment were pressed into service for decades) and it could have seen use in any number of conflicts. It remains relatively well preserved and aesthetically pleasing. This is a great option for fans of historical firearms. Good luck on your bid!