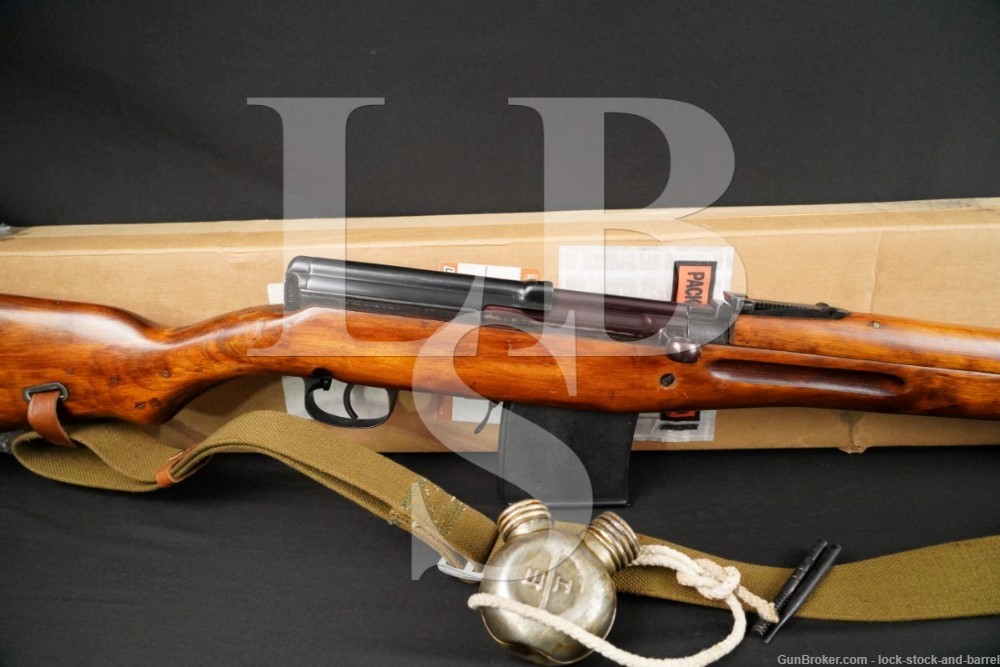 Markings: All the following markings are in Cyrillic and have been Romanized. The top of the chamber ring is marked “G” inside a box (a post WWII refurbishment marking), a star indicating that the rifle was manufactured at Tula, “1941” which was the date of manufacture and “9” inside a diamond. The left side of the chamber ring features the original serial number “GZh785”, and it has a faded proof marking. The right side of the chamber ring is marked with faded proof marks. The bolt handle is marked with the serial number which has been applied with an electric pencil (done during the refurbishment process). The bottom of the bolt, visible through the chamber, also has the serial number which was applied by an electric pencil. The trigger guard is serial matched, has a Tula proof and a faded proof. The buttplate features a faded Tula proof mark. The tangent leaf rear sight is marked with a Tula proof on the leaf itself and its base has a Izhevsk proof (visible when the ladder is raised). The left side of the forend, ahead of the finger groove, is marked “D”. The left side of the forend, surrounding the through bolt has several Cyrillic characters including “Yu”. The left side butt is serial matched and marked with the character “Shcha”. The heel is marked “F”. The bottom of the wrist is marked “Y”. The right side of the wrist and butt also have some Cyrillic characters. The right side of the frame is marked in English with the importer’s markings: the serial number “T02717” and “SVT 1940 7.62X54R MADE IN RUSSIA CDI SWAN VT”.

Stock Configuration & Condition/ Grip: The arsenal refurbished stock is 4-pieces featuring ventilated metal upper and lower piston covers, a wood ventilated handguard and a wood forend and butt. The stocks feature a barrel band with a sling swivel on the left side, finger grooves on the forend, a through bolt, a semi-pistol grip, a straight comb, a sling swivel on the belly and a metal buttplate. The stocks have some light handling marks, nicks and scuffs. Notably, there are two light cracks at the front left portion of the rear sight, a gap between the heel and butt-plate and a few light patches of finish loss. The LOP is 13.25” from the trigger to the rear end of the buttplate. The buttplate has finish loss around its leading edges and the area around the screw slots have been painted black. Overall, the arsenal refurbished stock is in Very Good Plus condition.

Bore Condition: The bore is grey with mostly sharp rifling. There light-moderate erosion concentrated in the grooves.

Overall Condition: The arsenal refurbished rifle retains about 75% of its metal finish. There are some light handling marks, scuffs and nicks on the metal parts of the rifle. The bolt has developed a brownish hue, a result from the refurbishment done at a Soviet repair depot. Notably, there is some finish loss around the muzzle, the top of the bolt has finish loss from the action being engaged and there is some light finish loss on the receiver. Some proof marks have faded but the majority of the markings are clear. The screwheads are serviceable. Overall, this arsenal refurbished rifle is in Very Good condition.

Box Paperwork and Accessories: The rifle comes with a single detachable box magazine. The left side of the magazine is marked with the serial number “5842” in electric pencil (it is not serial matched) and has the struck out serial number “485”. The magazine has been refinished and has scattered light pitting visible under the bluing. The magazine is in Very good condition. The gun has an attached olive drag sling which is held in place by two “dog collar” attachments, an oiler and two tools.

Our Assessment: This Tula Arsenal, Factory No. 314 NKV, manufactured SVT-40 is a semi-automatic rifle that is fed by a detachable magazine which takes 7.62x54mmR rounds. The SAMOZARYaDNAYa VINTOVKA TOKARYeVA OBRAZTsA 1940 GODA (self-loading rifle Tokarev model 1940) or SVT-40 was designed by Fyodor Vasilievich Tokarev, one of the preeminent Soviet weapon designers of the time. The precursor to the SVT-40 was the SVT-38 which proved unpopular among Soviet soldiers during the Winter War of 1940. The design was improved and by 1941 the SVT-40 began to enter service. The semi-automatic rifle saw extensive use by the Red Army during WWII across all fronts. The rifle proved its worth in the hands of some of the most accomplished snipers to emerge from the war. The SVT-40 was retired from active service in the Soviet Armed Forces following the end of WWII, and surplus units were eventually refurbished and sold off as hunting rifles in the Soviet Union. This rifle is an aesthetically pleasing and mechanically sound WWII era SVT-40. It is a WWII-vintage rifle you do not want to miss out on!