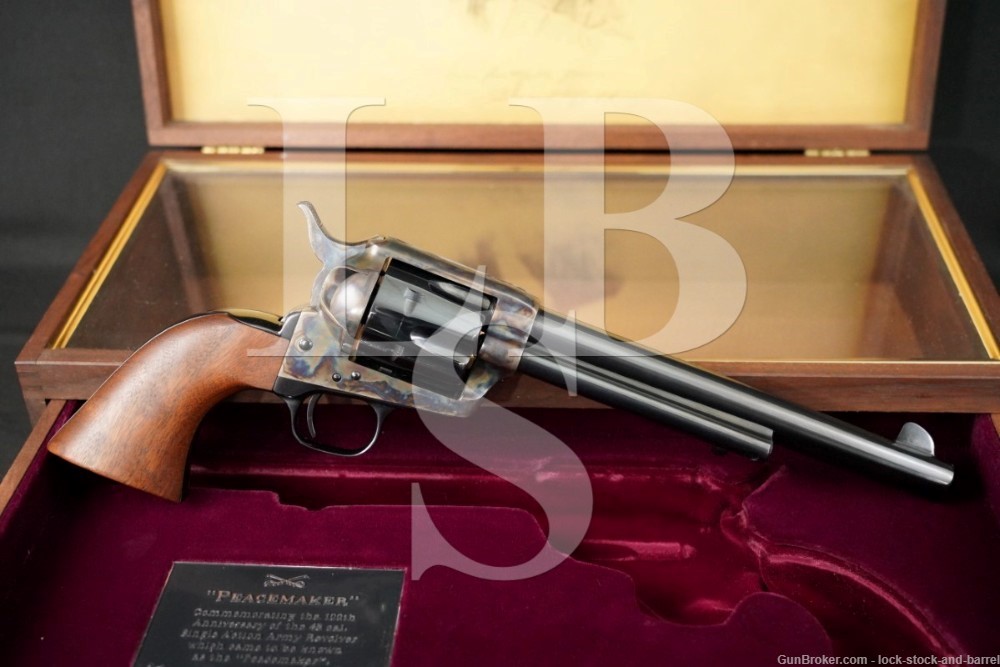 Sights / Optics: The front sight is a quarter round blade fixed to the front of the barrel. The rear sight is a “V”-notch integral to the topstrap.

Stock Configuration & Condition: The grip is a one-piece smooth walnut. The left of the grip has a nick and a scratch toward the bottom. Otherwise, there are only light handling marks. There are no chips or cracks. Overall, the grip is in Fine condition.

Overall Condition: This revolver retains about 97% of its metal finish. There are a few minor nicks and a light scratch on the bottom of the barrel next to the ejector housing. There is some light scuffing on the cylinder between two of the flutes and the cylinder has a very faint turn-line. Otherwise, there are only light handling marks. The screw heads are sharp. There are no chips or cracks. Overall, this revolver is in Fine-plus condition.

Mechanics: The action functions correctly. The cylinder locks with barely perceptible play on each chamber. We have not fired this revolver. As with all used firearms, a thorough cleaning may be necessary to meet your maintenance standards.

Our Assessment: The Single Action Army, as we know it, began life as the U.S. government service revolver (for trials) of 1872. The gun was soon adopted as the standard military service revolver until 1892. The Colt Single Action Army has been offered in over 30 different calibers and various barrel lengths. Its overall appearance has remained consistent since 1873. Colt has discontinued its production twice, but brought it back due to popular demand. The revolver was popular with ranchers, lawmen, and outlaws alike, but current models are mostly bought by collectors and reenactors. Its design has influenced the production of numerous other models from other companies. Here is a true Colt Peacemaker revolver, built by the same company that brought us this gun over 100 years ago. Whether a Single Action Collector, Handgun Collector, Colt Collector or Commemorative Collector – this revolver belongs in your gun room. Please see our photos and good luck!