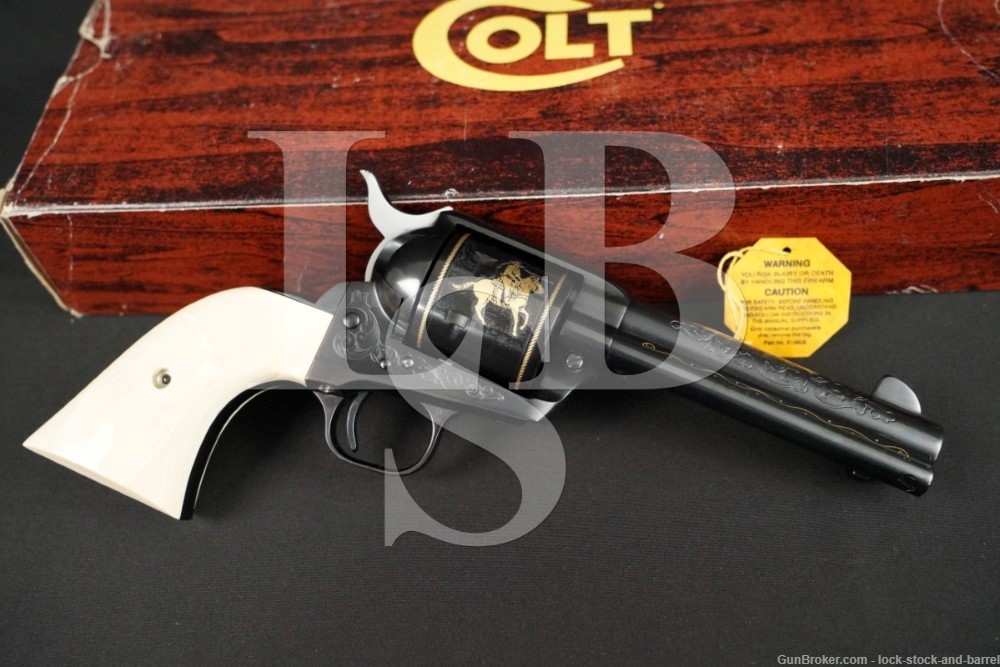 Markings: The top of the barrel is marked “COLT’S PT. F.A. MFG. Co. HARTFORD CT. U.S.A.”. The bottom of the frame is marked “CJWC / 0739”. The left of the trigger guard is marked “VP” in triangle and “K”, the right is marked “0”. The left of each portion of the grip frame, the left-rear of the frame and the front of the cylinder are each marked with assembly number “1596”. The left of the frame is marked in gold “PAT. SEPT. 19, 1871 / JULY 2, 72   JAN 19, 75” and with a gold rampant colt. There is floral engraving on each side of the frame and the right of the barrel. The top of the ejector housing has a gold motif. The left of the barrel has a gold American eagle holding banners with “JOHN” and “WAYNE” in gold. The backstrap has John Wayne’s signature in gold in the grip area and at the top in gold is the Red River D brand from Wayne’s famous movie “Red River”. The outside of the cylinder has rope strands at the front and rear with a bust portrait of John Wayne opposite an engraving of Wayne on a horse, also in gold. The inside of each grip panel is marked “JWC1596”.

Stock Configuration & Condition: The grips are two-piece smooth bone panels. Given that there were 3,100 of these revolvers made, it seems likely that these are the factory original grips, possibly an over-run which were used to replace grips which were not deemed suitable for these commemorative revolvers. The grips have no notable wear or damage. There are no chips or cracks. Overall, the grips are in Excellent condition.

Overall Condition: This handgun retains about 99% of its metal finish.  There is no notable wear or damage, only light handling marks and dried grease from the factory packaging. The screw heads are sharp. The markings are clear. Overall, this revolver is in Excellent condition.

Box, Paperwork & Accessories: The revolver comes with a faux-wood cardboard Colt box with “0739” hand-written on a label on one end, factory paperwork including the manual, and a yellow “stop-sign” hang-tag on the trigger guard. Included also is a wood presenetation case engraved with Wayne’s autograph!

Perhaps its most famous user is movie legend John “The Duke” Wayne. He appeared in nearly 200 film and television roles from the 1920s to the 1970s and is most famous as an iconic cowboy hero, essentially synonymous with American Western movies. In 1982, Colt honored him with a commemorative issue of their Single Action Army revolvers, with only 3,100 of the John Wayne Commemorative SAA made.

This example is in Excellent condition, appearing to have spent more time in its included factory packaging than out. It comes with a handsome case to display the revolver’s beautiful engraving and gold inlay. This would make a fantastic addition to any Colt collection, especially for fans of The Duke. Please see our photos and good luck!