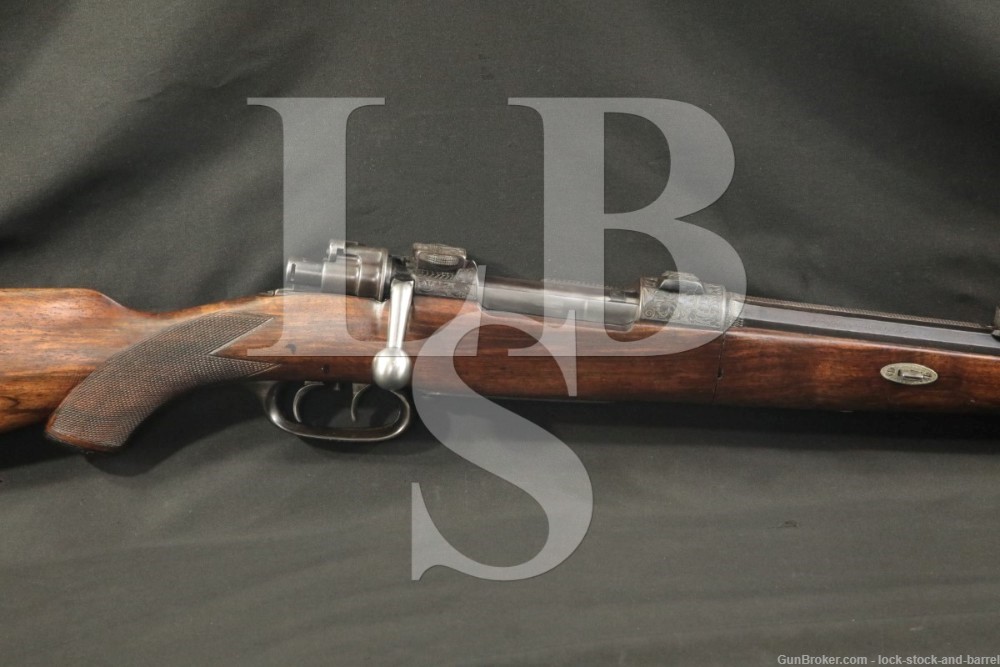 Markings: The right shoulder of the barrel is marked “CHRISTOPH FUNK”, the left shoulder “IN SUHL”. The sides and bottom of the barrel have pre-1939 German proof and inspection marks as well as “35167”. The bolt handle is marked “1950” and with German proofs, the safety, bolt sleeve and striker assembly are each marked “50”. The receiver, takedown assembly and floorplate have relief scroll engraving with a stag scene on the floorplate.

Sights / Optics: The front sight is a beaded blade in-line dovetailed to a textured ramped base integral to the barrel rib. The rear sight is a fixed “U”-notch with a taller folding “U”-notch dovetailed to a the rib at the rear of the barrel. There is provision for mounting a quick-detach claw-style scope on the top of the receiver. We do not know what scope rings/mount are appropriate for this mounting system.

Stock Configuration & Condition: The stock is two-piece walnut with wedge-secured forend, checkered capped pistol grip, straight comb with European style cheekpiece, basketweave-textured horn buttplate, trapdoor storage compartment with five-cartridge storage in the belly and a sling swivel mounted to the trapdoor assembly (there is another sling swivel mounted to the bottom of the barrel in front of the forend). The stocks have some light nicks, scuffs and scratches and one more notable scrape on the right below the comb. There are a few fill-spots, likely due to knots and most notable on the left of the forend above the takedown lever. The checkering is well defined. There are no chips or cracks. The LOP measures 14″ and 13″ from the fronts of the triggers to the back of the buttplate. The plate has scattered wear and some worm-holes. Overall, the stock is in Very Good-plus condition.

Bore Condition: The lands are bright, the grooves are gray. The rifling is well defined. There is scattered light erosion in the grooves.

Overall Condition: This rifle retains about 85% of its metal finish. The finish is thinning at most edges. There is some scattered minor surface oxidation and minor finish wear. There are a few light nicks and scuffs. The action shows light operational wear. The screw heads range from sharp to tool marked with strong slots. The markings are clear. Overall, this rifle is in Very Good condition.

Mechanics: The action functions correctly. The trigger is light and crisp when set. There is a Mauser style safety on the back of the bolt which blocks the trigger and locks the bolt. We did not fire this rifle. As with all used firearms, a thorough cleaning may be necessary to meet your maintenance requirements.

Our Assessment: The Mauser action was a revolution in firearms design which continues to show its influence to this very day. In addition to being used by militaries across the world, the action has also been the base for some of the most beautiful custom sporting rifles ever made. This is a nice example, made by the Christoph Funk firm. Founded in 1835, Christoph Funk is one of the older German gun makers and, despite the quality of their work, there is less documentation for their work than some of the other premiere Suhl-based makers. This example of their work proves their quality, with a Mauser action used for a takedown rifle chambered for the 9x57mm cartridge. The rifle exudes German quality from its part-octagon barrel, European-style stock and full-length barrel rib to its Germanic engraving. This rifle would be a nice addition to any collection of fine European sporting rifles. Please see our photos and good luck!