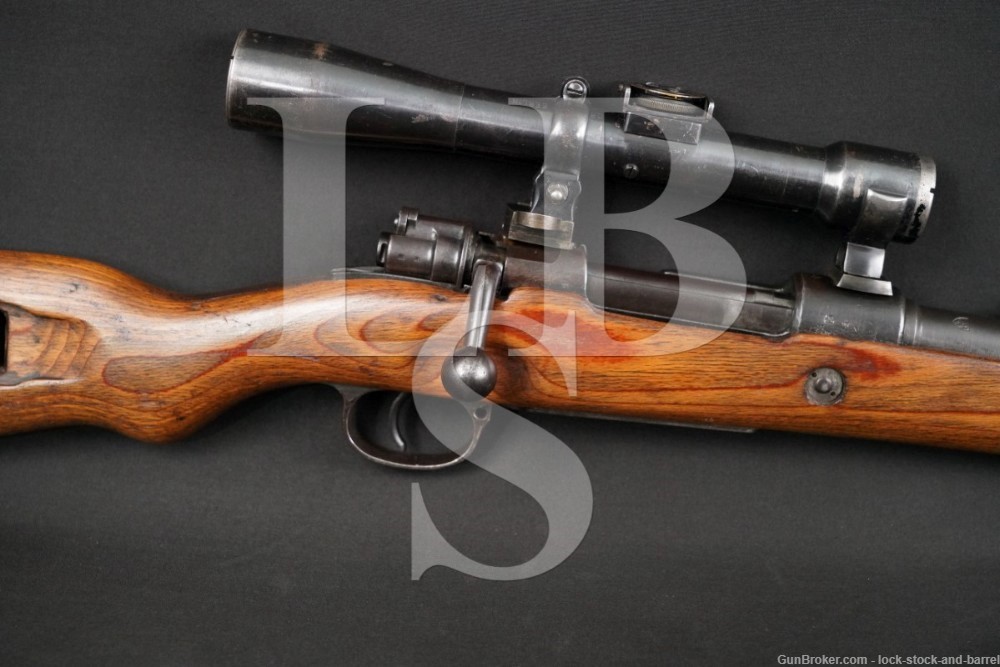 Sights / Optics: The front sight is an inverted “V” post set atop a small ramped base. The rear sight is a sliding “V” notched sight escalator assembly marked from “1 – 20”.
The top of the receiver has 2 claw mount scope bases attached to it by screws. The bases hold the mounts and the scope. The fixed 4 power scope uses a tapered post reticle. The adjustment disk turns and is marked from “1-10”. The view is cloudy. The interior of the lenses show small light spots. The interior of the front lens is clouded. The scope assembly shows scratches,  areas of thinning, and discoloration from oxidation. Overall the scope assembly is in about Good to Very Good condition.

Stock Configuration & Condition: The two piece laminate stock has a pistol grip, scallop for the bolt handle, metal nosecap, hole for the missing cleaning rod, barrel band with sling bar, through bolt, sling well, sling pass through, domed washer, and a checkered metal butt plate. The buttplate shows scratches & surface erosion. The top of the buttplate is proud of the wood.  The bottom of the forearm shows a hairline crack to the rear of the barrel band. The forearm is missing a piece of edge wood at the front and shows a repaired crack at the rear. The end of the crack flexes when the wood is pressed. The wood shows scrapes, scratches, and areas of discoloration. Some have damaged small portions of the surface wood.  The LOP measures 13 inches from the front of the trigger to the back of the butt plate. The stock rates in about Very Good overall condition as refurbished.

Bore Condition: The bore is dark and the rifling is worn. There is erosion throughout the bore.

Overall Condition: This rifle retains about 85% of its metal finish as refinished. Small scratches & spots of oxidation show through the finish. The metal shows scrapes, scratches & discoloration from oxidation. The trigger guard shows some light surface erosion. The screw heads show use. The remaining markings are deep. Overall, this rifle rates in about Good condition.

Mechanics:  The action functions correctly. We did not fire this rifle. As with all used firearms, a thorough cleaning may be necessary to meet your maintenance requirements.
The safety lever sticks in the “Fire” position. It flips and functions properly, but is very difficult to move from the “Fire” position to “Safe”. It may just need some penetration oil.

Box, Paperwork& Accessories: The rifle comes with a scope assembly; see above.

Our Assessment: This German  K98 Mauser was made during WWII. The markings on the top of the receiver were removed to attach the scope base so we don’t know exactly which German factory produced it. The rifle comes with a scope and claw mounts. This K98 has been refurbished but still retains some markings on the metal parts. This is an interesting Military rifle that was produced during WWII and uses a WWI style sniper scope. It will add to a Military collection.