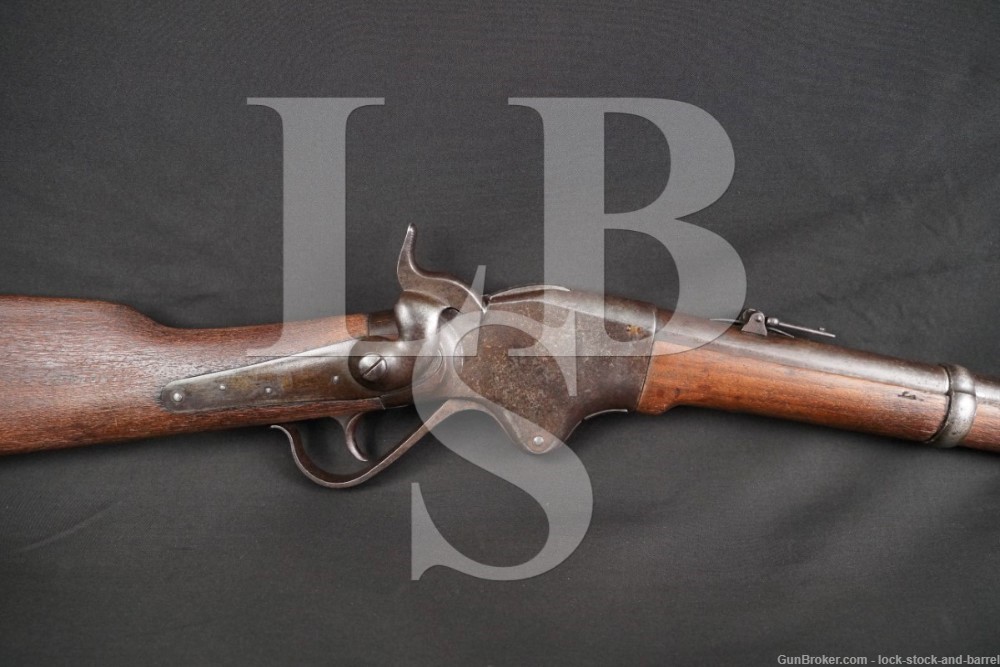 Stock Configuration & Condition: The stocks are two-piece smooth walnut with banded forend, straight wrist, steel buttplate, sling swivel in the belly and a sling bar with saddle ring on the left of the receiver and wrist. There is no visible cartouche on the stocks. There are cracks at the left-rear of the forend, the right edge of the buttplate’s tang, and a few scattered minor losses at the edges of the metal on the receiver and buttplate. There is marring around the barrel band with a gouge on the right side behind the band and there are some other scattered compressions, nicks and scratches. The wood is generally shy to the metal. The LOP measures 12 7/8″ from the front of the trigger to the back of the plate, 13″ to the back of the magazine’s tab. The plate has a thick, dark patina with scattered light-moderate erosion, nicks, dings and impact marks. Overall, the stocks are in about Fair-Good condition as refinished Antique.

Bore Condition: The six-groove bore is gray with well defined rifling, sharp where not interrupted by erosion. There is scattered light erosion in the bore, getting a little heavier toward the muzzle where there is some scattered light pitting.

Overall Condition: This rifle retains about 10% of its metal finish, mostly on the barrel under the forend. Most of the exposed surfaces have developed a mottled patina with some scattered light surface erosion, nicks, dings and scratches with scraping around the rear of the receiver and on the lockplate. The screw heads range from sharp to tool marked with strong slots. The receiver’s markings are worn but legible, the markings on the barrel are clear. Overall, this rifle rates in about Good-plus condition as Antique.

Mechanics: The magazine spring appears weak. Otherwise, the action functions correctly. The hammer has a half-cock safety position. We have not fired this rifle. As with all used firearms, a thorough cleaning may be necessary to meet your maintenance standards.

Our Assessment: The inventor of the Spencer Carbine was Christopher Miner Spencer, one of the leading figures of the machine tool industry. The Spencer carbine was different from any other firearm of its time. It was accurate; fired rapidly; had a long effective range; and held seven metallic cartridges that weren’t easily affected by moisture. It could be fired as rapidly as a Colt style revolver and reloaded in one-tenth the time. Spencer rifles and carbines met with high praise from those who were equipped with them, and with respect from those who faced them in battle. In its first combat test, Spencer-armed Union troops under the command of Colonel John Wilder earned the nickname “Lightning Brigade” when they defeated a numerically superior Confederate force at the Battle of Hoover’s Gap, Tennessee on June 24, 1863. They would go on to be used in a pivotal engagement during the Battle of Gettysburg in which General George A. Custer’s Michigan Troopers turned back J.E.B. Stuart’s advance on the Union’s right flank. This example is a carbine model produced circa 1864. With its 22″ barrel and weighing in at just under 9 lbs., it is lighter and faster handling than most standard issue muskets before taking into account its extreme advantage in rate of fire. This made it perfect for cavalry units who could fire and reload from the back of their horse. This rifle is in about Good-plus condition as Antique with little finish remaining but fairly strong mechanics and a decent bore. This is a great opportunity and a true piece of American history. Please see our photos and good luck!