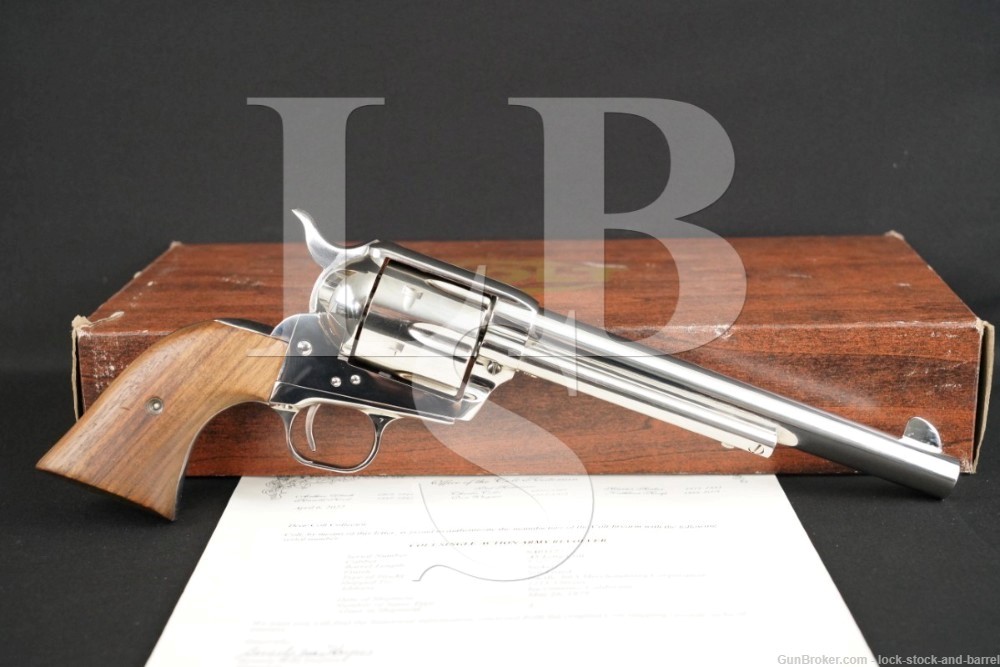 Stock Configuration and Condition: The grips are two-piece smooth walnut panels. The right panel has a couple of light nicks. Otherwise, there are only light handling marks. There are no chips or cracks. Overall, the grips are in Fine condition.

Overall Condition: This handgun retains about 97% of its metal finish. The most notable defect is a small but deep ding on the left of the barrel above the ejector tab. The left of the barrel has a few other minor nicks and the cylinder has faint turn-wear. Otherwise, there are only light handling marks. The screw heads range are sharp. The markings are clear. Overall, this handgun rates in Fine condition.

Box, Paperwork & Accessories: This revolver comes with a faux-wood cardboard Colt box with serial-matching label, and two-piece styrofoam inserts. Also included is a Colt Archives letter which confirms that this revolver shipped May 26, 1978 to Pacific Int’l Merchandising Corporation in Sacramento, CA as one of three guns of the same type in the shipment.

Our Assessment: In 1974, Colt quietly discontinued production of the single Action Army; this would be the second time they discontinued production of this glorious revolver. Luckily, the loyal fans of the SAA would not need to wait long as colt would bring back the SAA in 1976 as the “3rd Generation”. Changes were made but the basic SAA was the same, i.e. three standard barrel lengths of 4 3/4”, 5 1/2” and 7 1/2”, finishes of full nickel or blue, with color case hardened frame, and grips of hard rubber.

Everyone should have a Colt Single Action Army, and this would be a beauty to add to any collection. Manufactured in 1978, this revolver is in Fine condition, appearing to have spent most of its life in the included box, though there is one notable ding on the barrel. With a 7 1/2″ barrel, nickel finish and chambered for the original .45 Colt cartridge, this is a classic Single Action Army chambered for a classic cartridge. The included letter shows that it originally shipped to Pacific International Merchandising in Sacramento, California, better known to the locals as the Old Sacramento Armory. The pistol’s high condition and nickel finish will make it suitable for addition to a collection, but it should also make for a fun shooter that will draw some eyes at the range. Please see our photos and good luck!