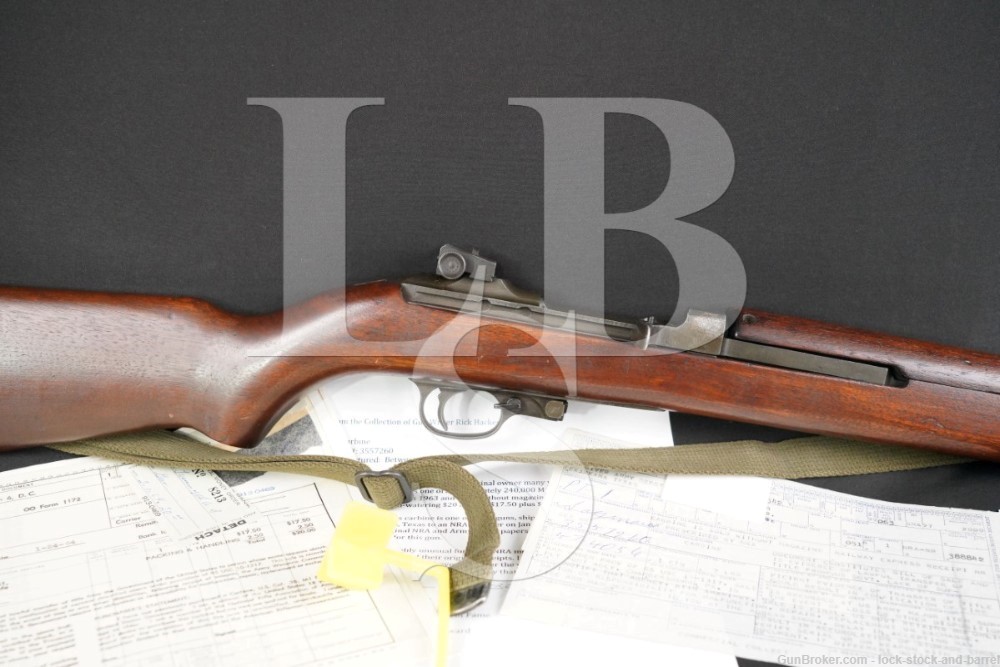 Year of Manufacture: 1942 to 1944. No specific manufacture dates are listed due to a number of reasons explained on pages 24 to 26 of Scott Duff’s book, The M1 Carbine Owner’s Guide.
Barrel Date: November, 1943

Stock Configuration & Condition: The two piece hardwood stock has a pistol grip, Type III barrel band with bayonet lug & sling loop, sling well, sling pass through, and metal buttplate. The butplate shows scrapes and a small amount of light surface erosion. The stock shows various scrapes, scratches and handling marks. Most of these marks are light or small. The LOP measures 13 1/4 inches from the front of the trigger to the back of the buttplate. The stock rates in about Very Good Plus to Fine overall condition.

Bore Condition: The grooves are semi bright. The rifling is sharp. There is light erosion in the grooves near the muzzle. The bore shows an M.E. of 0.9.

Overall Condition: This rifle retains about 95% of its metal finish. The metal shows scattered scuffs, scrapes & handling marks. The charging handle shows an area of thinning due to aggressive cleaning. The barrel shows light thinning under the barrel band. The receiver and bolt show operational wear. Most of the markings are deep. Some of the barrel markings are faded. Overall, this rifle rates in about Very Good Plus to Fine condition.

Box, Paperwork & Accessories: There is NO magazine.
The rifle comes with a letter from the consignor detailing the original purchase of this M1 Carbine. The rifle was purchased by an NRA member back in 1964. It was purchased from the Director of Civilian Marksmanship (DCM), the forerunner to the Civilian Marksmanship Program (CMP). The rifle was shipped from the Red River Arsenal. The shipping invoice invoice and other paperwork related to the original sale of the rifle are included in the auction.
The rifle also comes with a canvas sling marked “MRT”
.
Our Assessment: The M1 Carbine was developed and produced after WWII started. Over 6 million were made by a number of U.S. companies to assist with the all out war effort. The M1 Carbine was widely issued to U.S. Military Forces which numbered over 16 million during WWII. The M1 Carbine contributed greatly to U.S. efforts during WWII.
Saginaw Gear M1 Carbines are sought after by collectors. There are 2 separate Saginaw Gear manufacturers of M1 Carbines. Both were Divisions of General Motors but were located in different cities. Saginaw Carbines made in the original Saginaw, Michigan factory are marked “S.G.” or “SG”. Saginaw Carbines made in the Grand Rapids, Michigan factory are marked “S’G’ ”. Saginaw S’G’ guns were produced from the remnants of the failed Irwin-Pedersen factory in Grand Rapids. Saginaw took over production in Grand Rapids and marked the facilities M1 Carbines S’G’ to differentiate them from the ones produced at the original Saginaw plant.

This Saginaw S’G’ M1 Carbine was built sometime between 1942 and 1944 from the remaining parts at the failed Irwin-Pedersen factory in Grand Rapids. The rifle was later rebuilt at the Benicia Arsenal. The rifle was refinished when it was rebuilt so it looks pretty good for its age. The rifle was originally purchased through the Director of Civilian Marksmanship (DCM). The paperwork from the original sale is included  inthe auction. This Saginaw S’G’ M1 Carbine will add nicely to your WWII collection. Good luck.