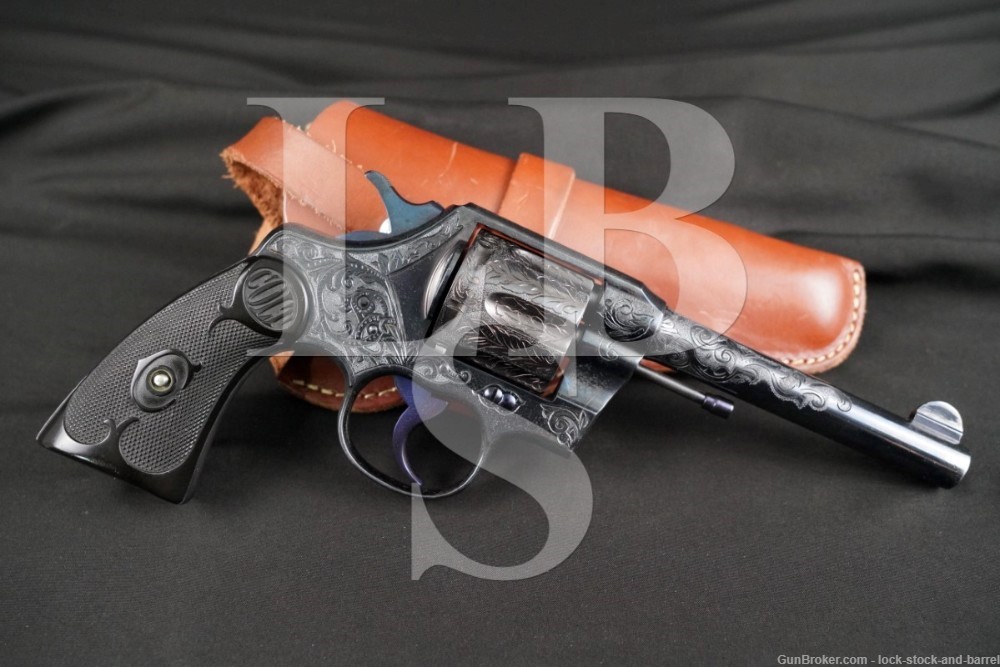 Sights / Optics: The front sight is a rounded blade with a rectangular base fixed to the front of the barrel. The rear sight is a “U”-notch in the topstrap.

Stock Configuration & Condition: The grips are two-piece checkered black hard rubber with “COLT” in oval at their tops and stylized “C” around the grip screw escutcheons. The inside of each panel has “514276” hand-scribed. The grips have only a few minor marks, most around the bottom edges. The checkering is well defined. There are no chips or cracks. Overall, the grips are in Fine-plus condition as not original to the gun.

Bore Condition: The bore is semi-bright and the rifling is sharp. There is some light erosion in the bore at the muzzle-end and stubborn leading at the forcing cone.

Overall Condition: This revolver retains about 90% of its current metal finish. The balance is mostly in evenly scattered faint surface oxidation. There is some thinning at the edges of the muzzle and a few scattered minor marks. There is some minor erosion under the finish. The action shows minor operational wear. The screw heads range from sharp to tool marked with strong slots. The markings range from clear to worn, but legible. Overall, this revolver is in about Very Good condition as refinished.

Mechanics: The action functions correctly both single action and double action. The cylinder locks up on each chamber with no play when the trigger is depressed. We have not fired this revolver. As with all used firearms, a thorough cleaning may be necessary to meet your maintenance standards.

Our Assessment: The Colt Army Special was brought out in 1908, and debuted Colt’s “positive lock” which continued to be used in Colt revolvers all the way into the Serpents! The “Army Special” was later renamed the “Official Police” after Colt discovered that the Army was more interested in their semi-automatic offerings but the various police departments around the country still liked revolvers. This example is chambered in .38 Special and has a 5″ barrel. The revolver has been refinished, likely when the scroll relief engraving was performed, giving the revolver a very distinctive appearance. Nearly all Colt revolvers are collectible, and we expect this one to be no exception. It’s also a nice old Colt chambered for the popular .38 Special cartridge and should still make for a great shooter. Please see our photos and good luck!