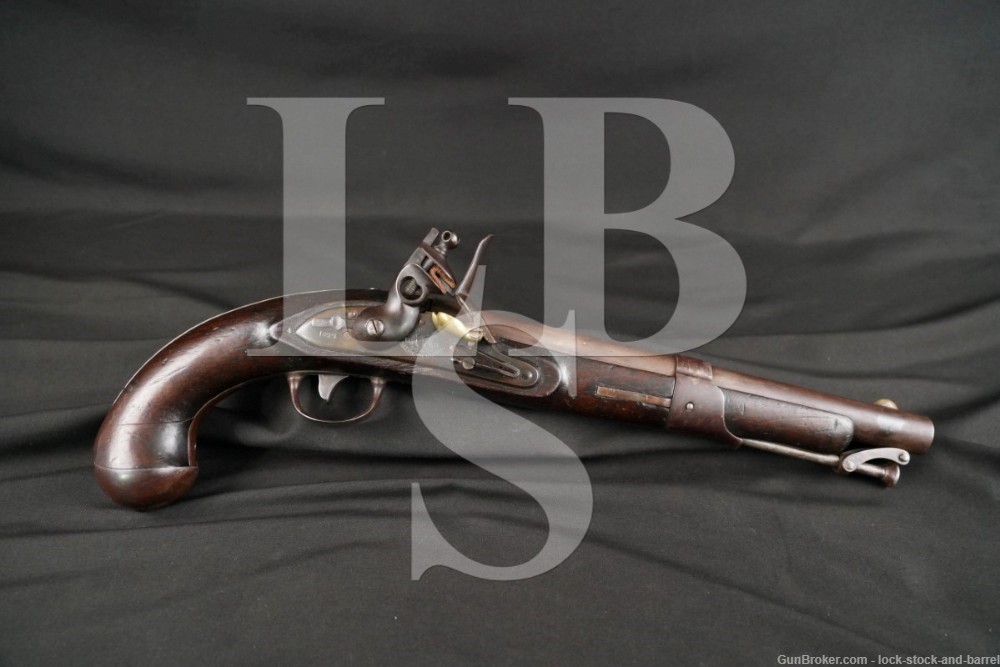 Markings: The lock-plate is marked “1822” and a faded “S. North” above the Great Seal of the United States (an eagle) which is atop “MIDLTN CONN.” The breech is marked with the following inspection marking: “JD. / P / US” and there is an obscure stamp immediately ahead of the nipple. There is a faded cartouche behind the side-plate (please see photos).

Sights/ Optics: There’s a “V” notch fixed to the top tang and a brass blade by the muzzle.

Stock Configuration & Condition/ Grip: The stock is wood featuring a slot in the forend for the included captive swivel ramrod, a metal barrel band secured by a spring, a lock plate, a side plate and a pistol grip with cap. The stock has light handling marks, nicks and scuffs. Notably, there is a pin between the side-plate and barrel band in addition to a pin behind the side-plate. Also, the bottom of the forend has a light crack which originates from the barrel band and extends towards the trigger guard, a moderate crack which circumvents the grip, a light ding to the left of the top-tang and a ding ahead of the pan. Overall, the stock is in Good condition for an Antique.

Bore Condition: The bore is dark with scattered heavy erosion

Overall Condition: The pistol has no metal finish. The brass pan is still present on the lock-plate (a remnant from the pistol’s original construction as a flintlock) but otherwise the gun was finished entirely in the white. The metal parts are coated in light-moderate surface oxidation and have taken a patina color. There are some light handling marks, nicks and scuffs. Notably, the captive swivel ramrod is stuck in the forend. The maker’s mark on the lock-plate is faded and the cartouche has largely worn off, but otherwise the markings are clear. The screwheads have some light tool-marks but they remain serviceable. Overall, the pistol is in Very Good condition for an Antique.

Mechanics: The action functions correctly. We have not fired this pistol. As with all used firearms, a thorough cleaning may be necessary.

Our Assessment: This is a Simeon North manufactured US Model 1819 flint-lock muzzleloader pistol produced in 1822. The gun was designed for mounted troops which were issued handguns with captive swivels (although the Navy also used captive swivels, their handguns featured belt hooks). The handgun is well preserved and has relatively light wear for an item originally made over 200 years ago. The sliding safety engages normally. This is a great example of the martial arms used by the US military in the early 19th century and will surely make a worthy addition to any historical firearms collection. Good luck on your bid!