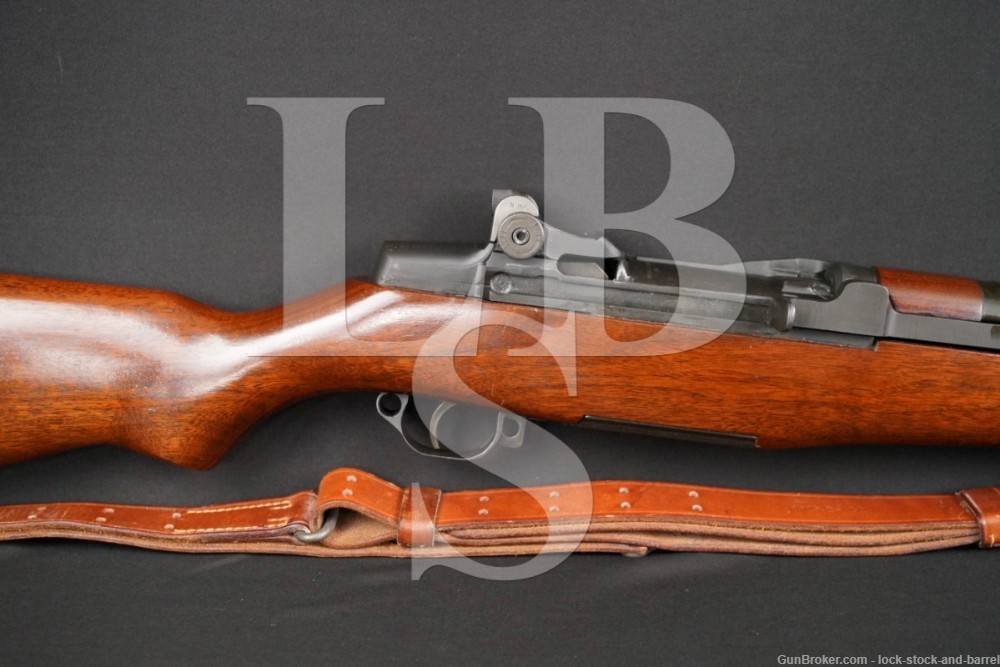 Model: M1 Garand Navy MK2 MOD 1 (Mark 2 Model 1).
An M1 Garand converted to 7.62 NATO by the installation of a Military contract 7.62x51mm barrel. We do not know who converted this rifle. The conversion was done commercially, NOT by a military armorer.

Stock Configuration & Condition: The hardwood stock has a pistol grip, metal nose caps, stacking loop, two sling loops and a metal buttplate with hinged door for storage in the butt. The butttplate has been refinished. The wood shows scattered scrapes and scratches. TThe LOP measures 13 1/8 inches from the front of the trigger to the back of the buttplate. The stock rates in about Very Good Plus to Fine overall condition as refinished.

Bore Condition: The lands are bright, the grooves are semi bright and the rifling is deep. There is fouling in the grooves which should clean up some. There is some light oxidation at the muzzle. The bore shows an M.E. of 1.1.

Overall Condition: This rifle retains about 96% of its metal finish as refinished. The gas tube screw and bolt latch show thinning and discoloration. The metal shows scuffs, scrapes, and scratches. The most prominent marks are on the bottom metal. There is light grease residue on the metal. The receiver and bolt show operational wear. The receiver markings are faded. Overall, this rifle rates in about Very Good Plus to Fine condition as refinished.

This Springfield Armory M1 Garand Navy was originally produced back in 1944 as a standard M1 Garand. It was later converted to M1 Garand Navy MK2 MOD1 configuration by the installation of a Military contract 7.62 NATO barrel. The conversion was done commercially, NOT by a military armorer. The rifle has National Match sights and a National Match op rod installed. The rifle has been refinished so it looks good and has a strong bore. This M1 Garand Navy should do well at the range and will add to a Military collection. Good luck.