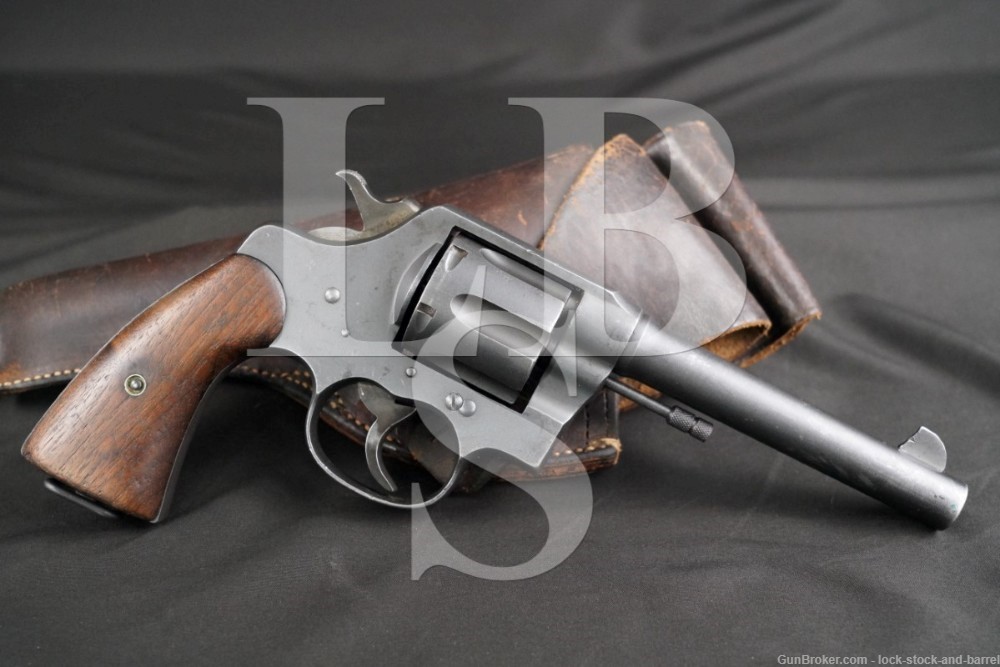 Stock Configuration & Condition: The grips are two-piece smooth wood panels. The grips show moderate handling wear with light nicks, scuffs and scratches scattered throughout. There are no chips or cracks cracks. Overall, the grips are in Very Good condition as refinished.

Bore Condition: The bore is semi-bright and the rifling is sharp. There is some light erosion and infrequent pitting in the bore.

Overall Condition: This handgun retains about 85% of its current metal finish. The finish is thinning at all edges. There is handling wear in the grip straps and wear on the butt from the lanyard ring. The barrel has scattered finish wear and scuffing. There are scattered light nicks, scuffs and scratches including a notable nick on the rear face of the front sight. There is infrequent minor surface oxidation, most notable on the sides of the hammer and trigger. The action shows operational wear including turn-wear on the cylinder. The screw heads range from sharp to lightly disfigured with a usable slot. The markings are generally clear, some are worn, but legible. The steps in the chambers for the case mouths are not as well defined as we are used to seeing on this model, but a .45 Colt cartridge will not chamber. Overall, this revolver is in about Very Good condition as Arsenal Refurbished.

Our Assessment: With America’s entry into WWI, it was found that Colt could not produce enough Model 1911 pistols for the U.S. Army. Some .38 revolvers were distributed to rear echelon troops, guards, and the Navy, but the Army also wanted some commercial revolver production to be used for a revolver capable of using the same ammunition as the 1911 semi-auto. Both Smith & Wesson Hand Ejector and Colt New Service revolvers chambered for .45 ACP were approved as substitute standard and designated the Model 1917. Colt’s M1917 was built on the same large frame as the Colt New Service revolver, making for a very rugged service revolver. This example is in Very Good condition as Arsenal Refurbished with the majority of its new finish remaining, a decent bore and strong mechanics. The assembly numbers on the barrel, frame, crane and cylinder are consistent with those applied to revolvers which went through an Arsenal Overhaul to ensure that hand-fitted parts could be re-assembled after the new finish was applied. This revolver will add to a Great War small arms, Colt or early 20th Century revolver collection, especially with its included G&K holster. Please see our photos and good luck!