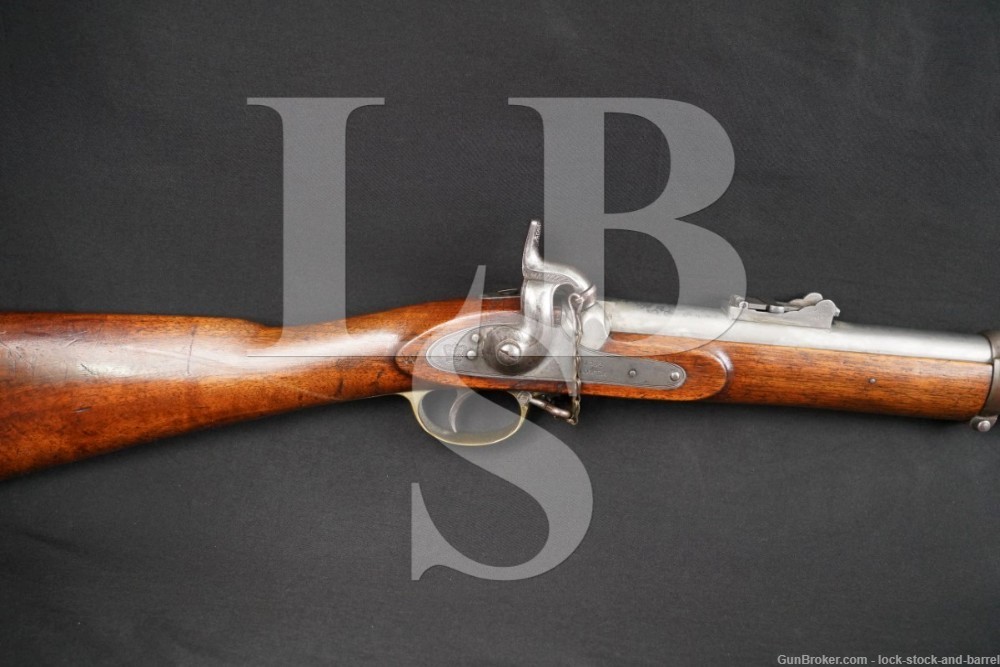 Year of Manufacture: Circa 1862, Antique

Markings: The lock–plate is marked with a crown behind the hammer and “1862 / TOWER” ahead of the hammer. The breech is marked “K9” at the top and adjacent the nipple, features Birmingham commercial proofs on the right side above “NJ” (likely for New Jersey). The left side is marked “NJ” in handwriting inside an oval and has a small “E.H.” The belly is marked “KING & PHILLIPS”. There is a faded proof behind the bottom tang. The wood is marked “W” behind the lock-plate. The ramrod is marked “T&C.G”.

Sights/ Optics: The front sight is a blade fixed by the muzzle. The rear sight is a ladder which presents a “V’-notch in the down position and when raised presents a fixed “V” at the top and a “V”-notch slider. The ladder is marked 5-8, inclusive.

Stock Configuration & Condition/ Grip: The stock is one-piece wood featuring a brass forend cap, a total of three barrel bands (the forward barrel band has a sling swivel), a slot in the forend for the included ramrod, a lock-plate secured by two screws, a straight wrist, a sling swivel fixed to the front of the trigger guard, a straight comb and brass butt-plate. The stock has scattered light handling marks, nicks and scuffs. Notably, there is a light ding between the forward and center barrel bands on the left side, a pin slightly behind the rear barrel band, a pin situated between the lock-screws, scattered spots of black discoloration on the left side of the butt, and scattered light compressions on the belly. The LOP is 14” from the trigger to the rear of the butt-plate. The butt-plate is tarnished, coated in some light surface oxidation and has some light handling marks. Overall, the stock is in Very Good-plus condition for an Antique.

Finish Originality: The gun appears to have undergone a deep cleaning and any original finish has worn off.

Bore Condition: The bore is semi–bright with mostly sharp rifling. There is light-moderate erosion concentrated in the grooves and some scattered stubborn fouling.

Overall Condition: The rifle-musket retains about 3% of its metal finish. The brass parts still retain some coloring but they are tarnished, coated in patches of light surface oxidation and have some light handling marks. The barrel appears to have undergone a deep cleaning and is now in the white, while the other bright parts are coated in light surface oxidation. There are some scattered light handling marks, nicks and scuffs on the gun’s metal surfaces. The markings remain clear. The screwheads are lightly tooled and remain serviceable. Overall, the rifle-musket is in Fine condition.

Box Paperwork and Accessories: There is a ramrod included with the musket and a chain nipple protector.

Our Assessment: Following the establishment of the Confederacy in 1861, the newly established bloc knew that conflict was inevitable with the United States which it had just seceded from. Both Confederate Central Government officials and several individual states sent agents to Europe in order to secure arms contracts. They would find their greatest success in Great Britain where several arms manufacturers agreed to supply the Confederacy with arms, although it should be noted that the United States also secured similar agreements with British firms once hostilities erupted. These British firms had no actual stake in the outcome of the American Civil War and were largely disinterested in the politics surrounding the conflict, they were just happy to secure lucrative contracts. There were several notable firms which supplied the South including King and Phillips of Birmingham. The British arms were superior to many of the aged weapons (including a distressing number of obsolete flint-lock ignition muskets) stored in Southern arsenals and the Confederates were far more reliant on the imported arms. British guns were configured to chamber the modern Minie ball and were equipped with the superior percussion ignition system. British made arms would be pressed into service in almost every major engagement of the Civil War.

This particular specimen is a Enfield Pattern 1853, Type III which was exported from Britain by King and Phillips during the Civil War. There are several features which indicate it saw service in the American Civil War. British arms that were exported to the warring parties during the Civil War had all of their British military markings removed by the exporters. This gun is no exception, it has had commercial proofs applied over the chamber, the lock’s original markings were altered (Queen Victoria’s initials were removed from the Royal Cypher) and the stock’s original military cartouches removed and replaced with commercial markings. The “NJ” marking on the left side of the chamber and stock was most likley a property marking added to the gun by a unit from New Jersey. Whether this arm is a remakred Confederate arm acquired by a unit from New Jersey or was sold directly to New Jersey is unclear.

This gun is beautifully preserved for a Civil War-era martial arm. The markings are almost all clear and crisp and there is relatively light wear. The gun features a chain nipple protector and the gun’s action still engages correctly. This is a great option for Civil War enthusiasts, a well preserved example of the arms taken into battle by infantry during the brutal conflict. Good luck on your bid!