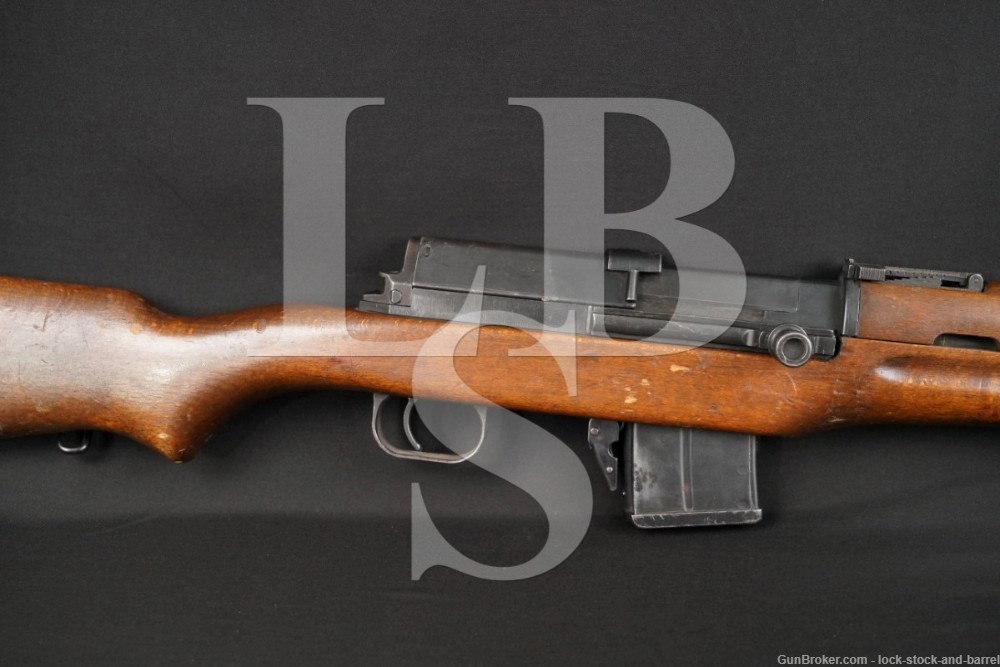 Stock Configuration & Condition: The two piece hardwood stock has a pistol grip, finger grooves, ventilated handguard, cutout for the folding bayonet, metal nose cap with sling bar, sling loop under the butt, and a metal butt plate. The refinished buttplate has scratches and surface showing throughthe finish. It also shows scrapes. The wood shows several scrapes, scratches and compression marks. Some have damaged small portions of the surface wood. The LOP measures 13 inches from the front of the trigger to the back of the buttplate. The stock rates in about Very Good overall condition as refinished.

Bore Condition: The barrel is counterbored to about 2 inches back from the muzzle. The lands are bright, the grooves are semi bright, and the rifling is deep. There is fouling and light intermittent erosion in the grooves in the front of the bore.

Overall Condition: This rifle retains about 92% of its current metal finish as refinished. The metal shows scrapes, scratches and handling marks. The right rear of the receiver shows thinning. The top cover shows discoloration. The screw heads show use. Some of the markings are deep; others are well defined. Overall, this rifle rates in about Very Good Plus condition, as refinished.

Mechanics: The action functions correctly.  We did not fire this rifle. As with all used firearms, a thorough cleaning may be necessary to meet your maintenance requirements.
The bayonet locks into place properly.

Box, Paperwork & Accessories: The rifle comes with a 10 round magazine that shows an area of surface erosion. It appears to function properly.

Our Assessment: This rare Egyptian Rasheed is in pretty good shape for its age. The metal has been refinished and the bore is still strong. The Egyptian Rasheed rifle is chambered in 7.62×39 and is the little brother of the Egyptian Hakim Rifle that is chambered in 8mm Mauser. The Hakim was derived from the Swedish AG-42 Ljungman which was chambered in 6.5×55.
There weren’t many Rasheed rifles made. The rifle is marked “MADE IN U.A.R.” This mark, as well as several Arabic markings adds to the history of the rifle. The United Arab Republic (UAR) was a short-lived political union between Egypt and Syria. The union began in 1958 and existed until 1961, when Syria seceded from the union. Egypt continued to be known officially as the “United Arab Republic” until 1971.
Good luck.

CA Legal or CA Private Party Transferable (THIS SECTION DOES NOT APPLY TO OUT-OF-STATE RESIDENTS): This center-fire, semi-automatic rifle is C&R eligible and CAN be transferred as a Dealer Sales in California, and CAN be transferred as a Private Party Transfer (PPT) at our Simi Valley location. All C&R firearms must be transferred through your local dealer OR at our Simi Valley location; we cannot ship directly to a C&R holder in California. Out of state residents can disregard this section – your local laws apply.