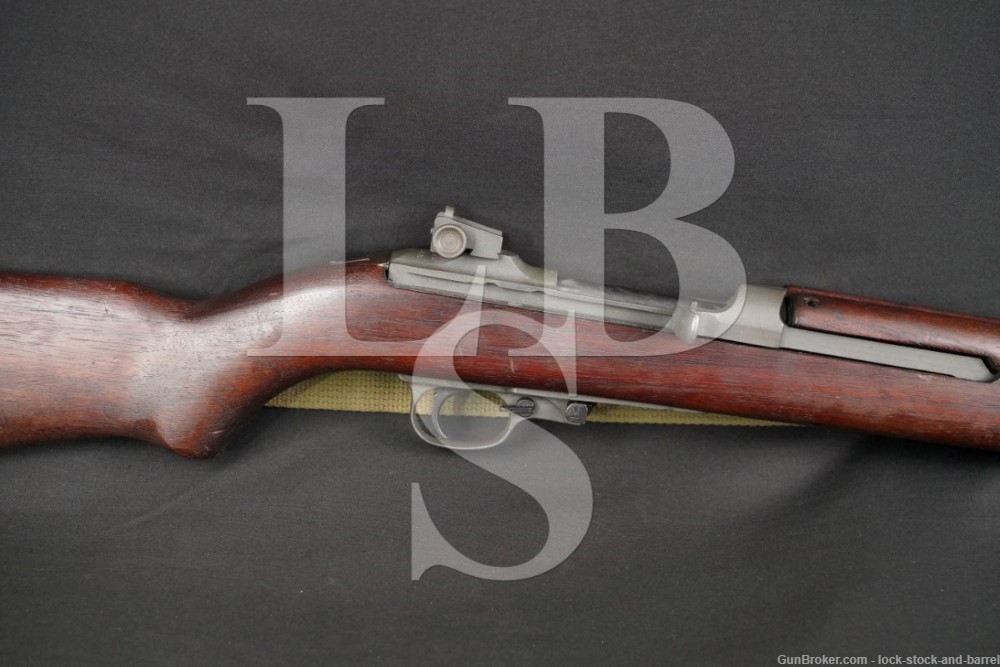 Year of Manufacture: 1942 to 1944. No specific manufacture dates are listed due to a number of reasons explained on pages 24 to 26 of Scott Duff’s book, The M1 Carbine Owner’s Guide.  Barrel Date: June, 1943

Stock Configuration & Condition: The two piece hardwood stock has a pistol grip, barrel band with sling loop & bayonet lug, sling well, sling pass through and a metal buttplate. The refinished buttplate has scratches & dings showing through the finish. It also shows scrapes. The bottom of the stock shows a long repaired crack that ends at the magazine well. Nail heads are visible on the sides of the repair. The wood shows scrapes & scratches. A few have damaged small portions of the surface wood. Most of these marks have been finished over. The LOP measures 13 ¼ inches from the front of the trigger to the back of the buttplate. The stock rates in about Very Good Plus to Fine overall condition as refurbished.

Overall Condition: This rifle retains about 98% of its metal finish as refinished. The barrel, under the barrel band, has a patch of surface erosion showing through the finish. The trigger guard has scratches & oxidation showing though the finish. The front of the barrel shows scrapes & a spot of discoloration. The remaining metal shows small scrapes & handling marks. The screw heads show light use. The markings are well defined. Overall, this rifle rates in about Very Good Plus to Fine condition, as refinished.

Box, Paperwork & Accessories: There is no magazine. The rifle comes with a green canvas sling. It shows soiling on the canvas and oxidation on the metal tabs. It is in about Very Good overall condition.

Our Assessment: This WWII Saginaw S’G’ M1 Carbine was made by the Saginaw Steering Gear Division of General Motors in Grand Rapids, Michigan. At some point the rifle was Arsenal Rebuilt at the Rock Island Arsenal using a mix of USGI parts. After WWII the rifle served for a U.S. friendly country. The rifle was eventually imported back to the US for sales to the civilian market. It is a nice looking M1 with a refurbished stock, refinished metal, and a good bore.

This is a Rare M1 Carbine for your collection. The combined M1 Carbine production of Irwin-Pedersen and Saginaw S’G’ is only 223,620 units. This is the lowest production number of all the M1 Carbine manufacturers (page 211 of Craig Riesch’s book, U.S. M1 Carbines Wartime Production 7th Edition).

Let us try to clear up some confusion. Saginaw Gear and Saginaw S’G’ are the same company located in different factories. Saginaw Carbines made in Saginaw, Michigan are marked “S.G.” or “SG”. Saginaw Carbines made in Grand Rapids, Michigan are marked “S’G’ ”. Saginaw S’G’ guns were produced from the remnants of the failed Irwin-Pedersen production facilities in Grand Rapids. Saginaw took over production in Grand Rapids and marked the facilities M1 Carbines S’G’ to differentiate them from the ones produced at the original Saginaw plant.