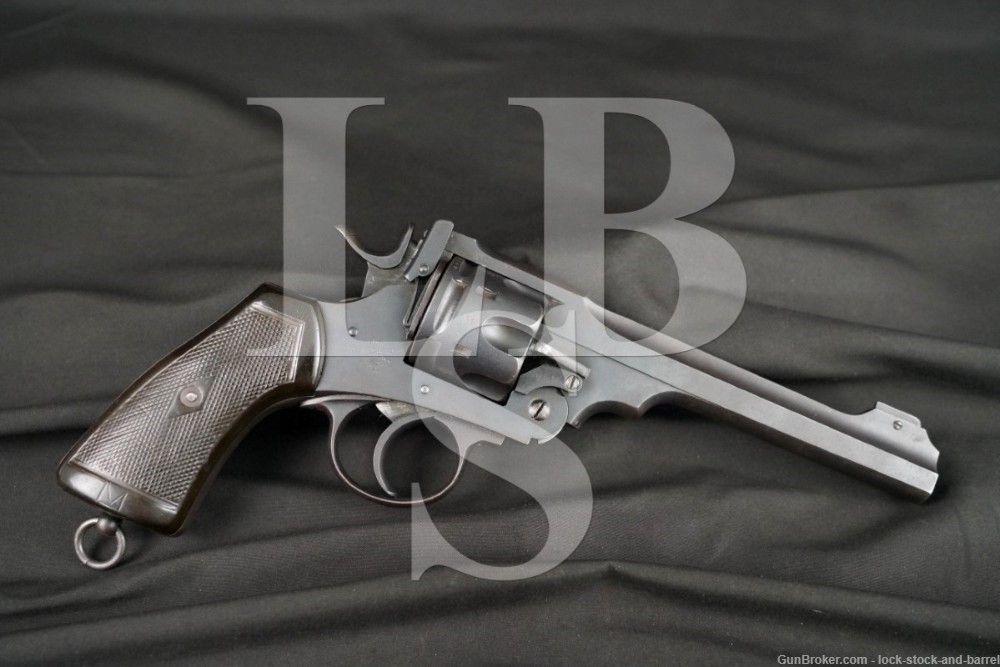 Action Type: Single and Double-Action Top-Break Revolver that has a 6-Round Cylinder with an Ejector

Sights/ Optics: The front sight is a blade screw set to a raised slotted base on the barrel rib. The rear sight is a “U” notch at the bottom of a “V” in the top of the barrel latch.

Stock Configuration & Condition/ Grip: The grip panels are two-piece checkered hard rubber with smooth borders. The butt-strap features a fixed lanyard ring. The grip panels have scattered light handling marks, nicks and scuffs. Notably, there is a chip at the bottom of the left grip with a tang from the lanyard ring visible and a light crack at the bottom of the right panel. The checkering is lightly worn on the right panel, but the panels checkering remains mostly sharp. Overall, the grips are in Good condition.

Bore Condition: The bore is mostly bright with sharp rifling. There is a bulge near the muzzle and some light erosion concentrated in the grooves.

Overall Condition: The pistol retains about 75% of its metal finish. The gun is coated in scattered patches of light surface oxidation but its bluing remains strong. The gun has some light handling marks, nicks and scuffs. Notably, there is finish loss around the muzzle, light wear along the leading edges and a light turn-line on the cylinder. The markings remain clear. The screwheads are lightly tooled, but they remain serviceable. Overall, the gun is in Fair condition due to the bulge in the bore, otherwise it would rate in Very Good condition.

Mechanics: The action functions correctly. The cylinder locks with light play on each chamber. The single-action is crisp and double-action is smooth. We did not fire this handgun. As with all used firearms, a thorough cleaning may be necessary to meet your maintenance standards.

Our Assessment: The Webley Mark VI was the last variant of the iconic handgun to see service which was chambered for the .455 caliber cartridge. It was introduced during the First World War, in 1915, and proved itself a durable and stalwart sidearm. Unlike earlier variants of the Webley, the Mk. VI is easily identifiable by its square-butt. It would remain the primary side-arm of the British military until 1928, but continued to see service through WWII and was only retired in 1963, although the unique cartridge made supplying ammunition for the revolver increasingly difficult towards the end of its service life.

This particular specimen was manufactured at the Royal Small Arms Factory at Enfield in 1924. The revolver has light wear consistent with a gun that is 98 years old and there is a bulge in the bore. Despite this, the gun has several nicely preserved parts that are not commonly seen on Mk VI Revolvers on the collectors market; the cylinder has not been ground down (most Mk VI Revolvers had their cylinders ground down when they entered the commercial market in order to allow them to fire .45 ACP rounds; this gun’s cylinder is still in its original configuration)  and the parts are serial matched. This is a fascinating British martial arm that was manufactured in the Inter-War period. Good luck on your bid!