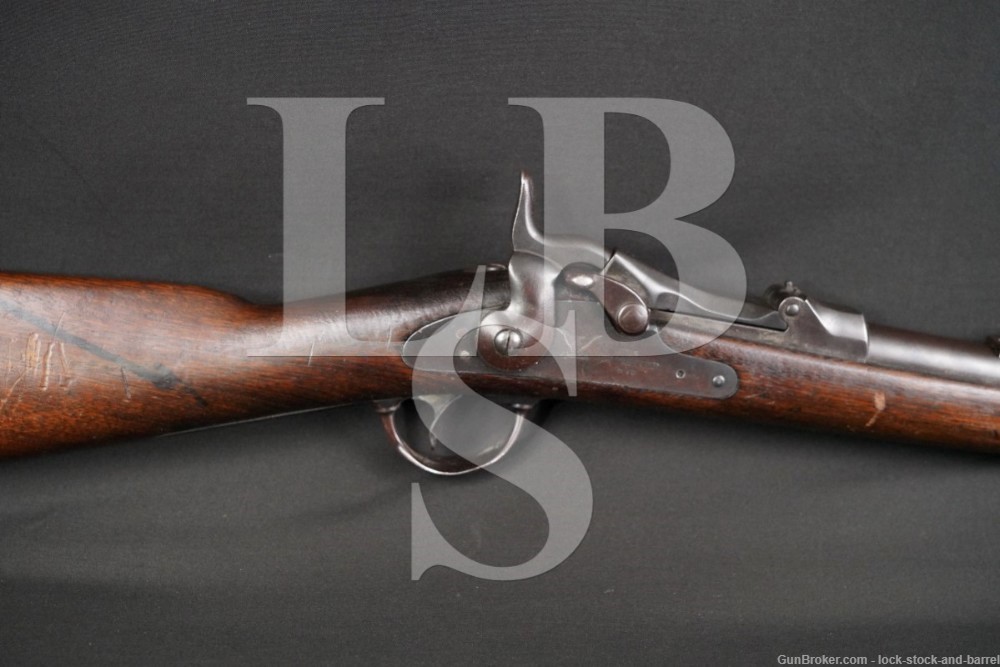 Sights/ Optics: The front sight is a blade pinned to a base by the muzzle. Also, there is a Buffington rear sight marked “C” on the leaf.

Stock Configuration & Condition/ Grip: The stock is one-piece wood featuring a barrel band secured by a spring, a lock-plate secured by two screws, a sling bar with fixed saddle ring, a straight wrist, a straight comb and a metal semi-crescent butt-plate with storage compartment housing a disassembled three piece cleaning rod. The stock has some light-moderate handling marks, nicks and scuffs. Notably, there is a light crack at the front left portion of the stock, two light dings behind the barrel band on the left side, a light crack between the rear lock-screw and chamber, a small crack on the right side of the toe, some black marker residue on the right side of the butt and a few light dings on the right side of the forend between the lock-plate and barrel band. The LOP is 13.5” from the trigger to the rear of the butt-plate. The storage compartment’s door is tightly fitted and difficult to dislodge. The butt-plate is coated in light surface oxidation and has some light handling marks. Overall, the stock is in Very Good condition for an Antique.

Bore Condition: The bore is grey with mostly sharp rifling. There is light erosion concentrated in the grooves and some scattered light pitting.

Overall Condition: The carbine has no surviving finish. The gun is coated in light surface oxidation and has taken a patina color. There are scattered light handling marks, nicks and scuffs. Notably, there is light wear along the leading edges including the muzzle. The markings remain clear. The screwheads are only lightly tooled and remain serviceable. Overall, the carbine is in Very Good condition for an Antique.

Box Paperwork and Accessories: There is a disassembled cleaning rod stored in the butt.

Our Assessment: Erskine S. Allin was the Master Armorer at Springfield Armory at the end of the Civil War and was tasked with converting surplus muzzleloaders into more modern breech loaded rifles. Working around the same time as Jacob Snider (an American salesman who patented a breech-loading system which he sold to the British), Franz Wänzl (a Viennese gunsmith who patented a breech-loading system with the Austrian Empire) and several other innovators, the Allin system was born in 1865. All of these systems were quite similar with only minor variations. The Model 1865 was patented in September of that year (several months after the Civil War) and was soon dubbed the “Trapdoor” rifle. The next evolution in the Allin system came a year later and is remembered as the Model 1866 “Second Allin Conversion,” built on M1863 muzzleloaders the gun had improved ballistics over his prior action. The gun was chambered for the then modern .50-70 centerfire cartridge and proved a formidable weapon for its time. In 1868, a new model of trapdoor was introduced which was built from scratch. Finally, in 1873 Springfield Armory began to make trapdoor rifles chambered for the .45-70 government cartridge (this rifle is chambered .45-70), and the stalwart M1873 remained in service as late as the Spanish-American War. There would be several ensuing variations and this gun is a Model 1884 (serial number 325,000-480,000 per Flayderman).

This particular specimen appears to have been rebuilt by a commercial company. In the early 1880s the Ordnance Department sold massive amounts of surplus weapons and parts on the commercial market. Surplus resellers, like Francis Bannerman’s firm, bought these items in bulk and reassembled them for resale. This particular specimen appears to have fabricated in such a manner. One indicator is the fact that serialization puts this gun’s manufacture as being 1888 and as a mid-production Model 1884, but the lock-plate bears the M1873 designation (although M1873 breech blocks were used on some Model 1884 Rifles breech blocks, the lock-plate should not have a year marked on it). Despite having a replacement lock-plate, the gun retains the distinct charm of a Springfield Trapdoor Rifle. This is a great option for fans of historical firearms. Good luck on your bid!