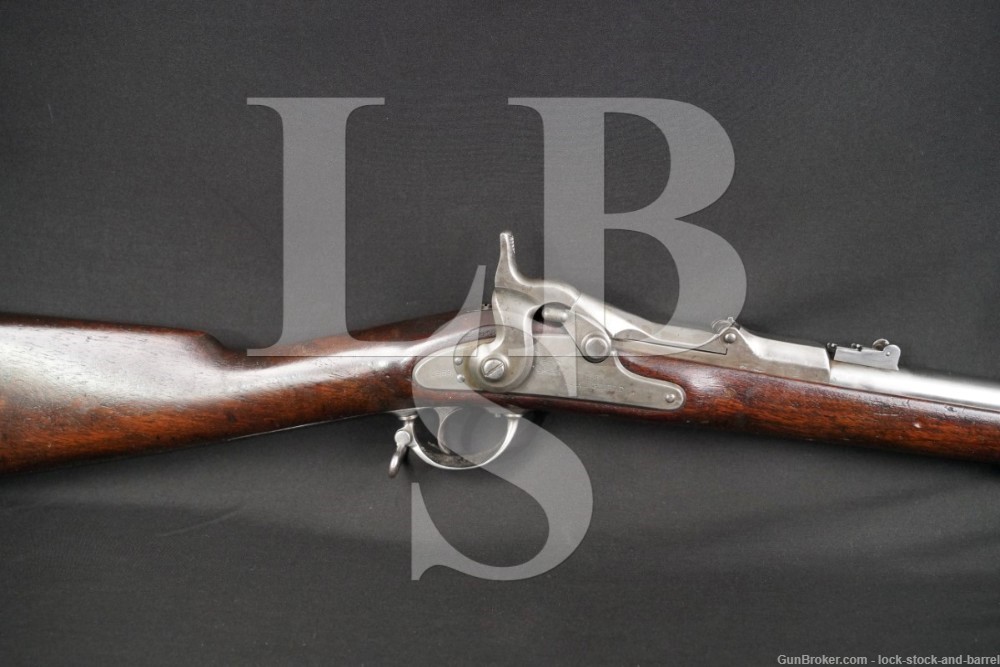 Sights/ Optics: The front sight is a pinned brass blade on a base fixed by the muzzle. The rear sight is installed backwards. It features a small “V” in the down position and is marked “1”, the middle leaf is marked “3” and features a raised “V” and the tallest leaf features a “V” and is marked “5”.

Stock Configuration & Condition/ Grip: The stock is one-piece wood featuring a screw-adjusted barrel band despite the fact the stock has a barrel band spring, a lock-plate secured by two screws, a sling bar fixed to the left side of the stock, a straight wrist, a sling swivel fixed to the trigger guard which is installed backwards, a straight comb and metal semi-crescent butt-plate. The stock has some light handling marks, nicks and scuffs. Notably, there are two light dings ahead of the barrel band on the left side, two small holes on the heel and there is a patch repair going through the center of the grip. The LOP is 13.5” from the trigger to the rear of the butt-plate. The butt-plate has scattered light pitting and handling marks. The butt-plate appears to have undergone a deep cleaning with only some light patina residue around the leading edges. Overall, the stock is in Very Good condition for a refinished Antique.

Bore Condition: The bore is semi-bright with sharp rifling. There is light erosion concentrated in the grooves and some scattered light pitting.

Overall Condition: The rifle has no surviving metal finish. The gun has undergone a deep cleaning and is now entirely in the white. There are scattered light handling marks, nicks and scuffs. Notably, there are scattered patches of light surface oxidation concentrated on the lock-hammer and receiver in addition to scattered patches of light pitting. The markings on the metal parts of the gun remain clear, but the cartouches and stock markings are faded. The screw-heads are only lightly tooled and remain serviceable. Overall, the rifle is in Very Good condition.

Our Assessment: Erskine S. Allin was the Master Armorer at Springfield Armory at the end of the Civil War and was tasked with converting surplus muzzleloaders into more modern breech loaded rifles. Working around the same time as Jacob Snider (an American salesman who patented a breech-loading system which he sold to the British), Franz Wänzl (a Viennese gunsmith who patented a breech-loading system with the Austrian Empire) and several other innovators, the Allin system was born in 1865. All of these systems were quite similar with only minor variations. The Model 1865 was patented in September of that year (several months after the Civil War) and was soon dubbed the “Trapdoor” rifle. The next evolution in the Allin system came a year later and is remembered as the Model 1866 “Second Allin Conversion”, built on M1863 muzzleloaders the gun had improved ballistics over his prior action. The gun was chambered for the then modern .50-70 centerfire cartridge and proved a formidable weapon for its time. The next variant was the Model 1868 (on Auction here) which, unlike its two predecessors, was fabricated as a breechloader from scratch and was the only .50-70 cal trapdoor to be serialized, although surplus parts from obsolete muskets were still used in its construction. Approximately 52,000 of the M1868 rifles were fabricated between 1869-1870, half of which were exported to France for service in the Franco-Prussian War of 1870. The rest were issued to the American soldiers fighting to secure American control over the “Wild West.” The stalwart M1868 remained in service with the Navy and Marine Corps until the 1880s, well after the introduction of the .45-70 cartridge. Several other variations were produced over the course of the 1870s and 1880s.

This particular specimen is a Model 1868, but it has been heavily modified. It appears to have been rebuilt by a commercial company. In the early 1880s the Ordnance Department sold massive amounts of surplus weapons and parts on the commercial market. Companies including Francis Bannerman’s firm bought these items in bulk and reassembled them for resale. This particular specimen appears to have fabricated in such a manner. The smaller carbine and cadet variants were more popular with the public than the lengthier rifles, thus the companies that resold the guns often modified rifles into custom carbines. This appears to be the case with this gun, it has also been awkwardly reassembled; the trigger guard was installed back-wards, an incorrect barrel band and backwards rear sight. Despite having been awkwardly reassembled the issues should prove relatively simple to fix and the gun retains the distinct charm of a Springfield Trapdoor Rifle. This is a great option for fans of historical firearms. Good luck on your bid!