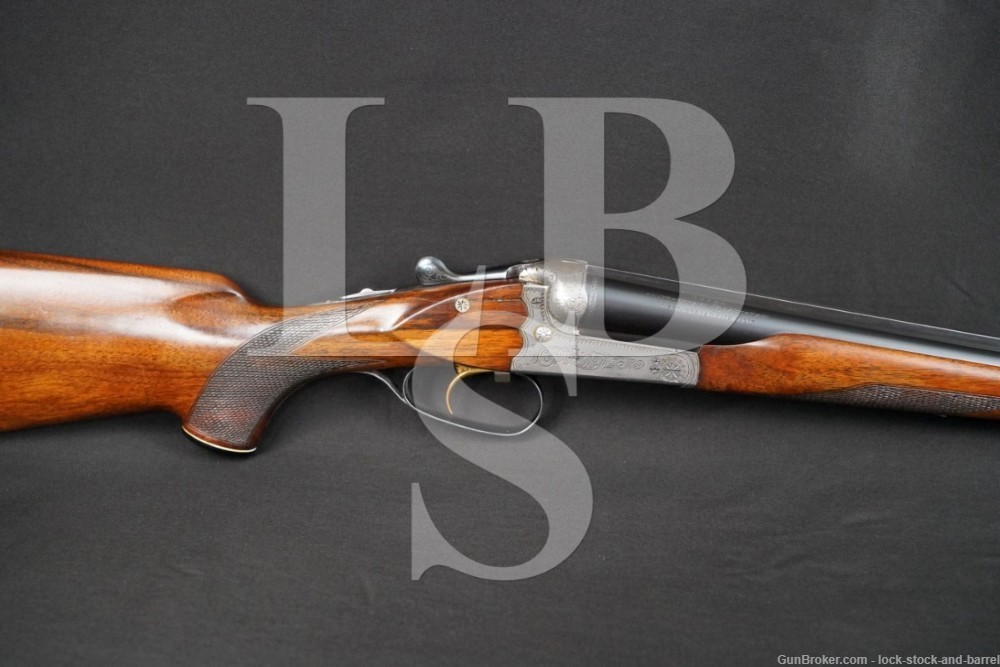 Sights / Optics: This shotgun has a silver-colored bead fixed to the front of the rib. The top of the rib has wavy serrations for glare reduction.

Stock Configuration & Condition: The stocks are two-piece checkered walnut with a beavertail forend, capped pistol grip, straight comb, and ventilated black rubber J.P. Sauer & Sohn recoil pad. The forend has minor handling wear with only a few light marks. The wrist has long cracks at the front on each side toward the top and the buttstock has some other scattered light nicks and scratches. The checkering is well defined. The LOP measures 14 1/4″ from the front of the trigger to the back of the recoil pad. The pad has a patch of wear at the heel but remains fairly supple. Drop at comb is approximately 1 1/2″, drop at heel 2 1/8″. Overall, the stocks are in Good-Very Good condition and would rate Very Good-Fine but for the cracks in the wrist.

Overall Condition: This shotgun retains about 95% of its metal finish. The finish is thinning at most edges. The barrels have a few scattered light scuffs and scratches with wear from the forend which is concealed when assembled. The receiver has a few scattered minor marks and some spots of stubborn discoloration from dried grease. The screw heads range from sharp to tool marked with strong slots. The markings are clear. Overall, this shotgun is in Very Good-plus condition.

Mechanics: The action functions correctly. The barrels lock solidly to the frame. The safety engages automatically upon opening. We have not fired this shotgun. As with all used firearms, a thorough cleaning may be necessary to meet your maintenance standards.

Our Assessment: The Sauer & Sohn firm was first founded in 1751 in Suhl, Germany and they are the oldest firearms manufacturer still active in Germany. While they are known today for their Sig-Sauer semi-automatic pistols made in collaboration with Swiss arms AG, they were once well known for their fine European made rifles, shotguns and drillings. This shotgun has strong overall mechanics and retains the great majority of its original finish. Along with Simson, it was one of the Suhl gunmakers which managed to continue producing high quality sporting guns while behind the Iron Curtain, but would later move to the Kiel region to produce firearms in West Germany, such as with this Royal model double gun. This is a nice example of their work and will make a fine addition to any collection. Please see our pictures and good luck!