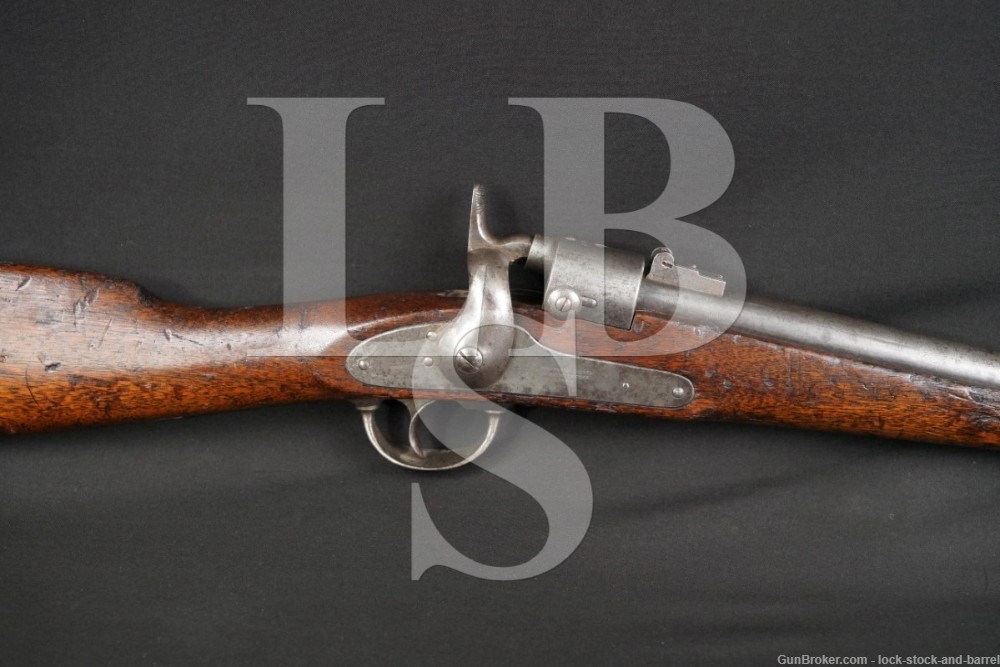 Stock Configuration & Condition/ Grip: The wood stock features a barrel band secured by a spring, a sling bar with a fixed saddle ring, a lock-plate, a straight wrist, a straight comb and a semi-crescent butt-plate. The stock has scattered light-moderate handling marks, compressions, nicks and scuffs. Notably, there is a moderate ding at the front left tip of the forend, a light ding at the tip of the top-tang, a few small moderate dings on the right side of the butt and a moderate ding on the right side of the forend behind the barrel band. The LOP is 13.75” from the trigger to the rear end of the butt-plate. The butt-plate is coated in light surface oxidation and has some light handling wear. Overall, the stock is in Very Good condition for an Antique.

Bore Condition: The bore is mostly bright with sharp rifling. There is some light erosion concentrated in the gloves with a notable patch of pitting on the left side of the bore near the muzzle.

Overall Condition: The gun retains none of its metal finish. The metal parts of the gun are now mostly bright with scattered patches of light surface oxidation. There are light scuffs, nicks and handling marks. The markings remain clear. The screwheads have light tool-marks but they remain serviceable. Overall, the carbine is in Very Good condition for an Antique.

Mechanics: The action functions correctly. The gun is loaded in a manner somewhat similar to the Snider action: the hammer is brought to the half-cock safety position, a notch on the right side of the breech block is pulled and the block is pulled to the left and a cartridge is loaded. We have not fired this carbine. As with all used firearms, a thorough cleaning may be necessary to meet your maintenance requirements.

Our Assessment: Benjamin Franklin Joslyn was an influential weapons designer whose inventions would be pressed into service during the Civil War. Born in 1821, Joslyn’s first breakthrough design was completed in 1855, the Joslyn Breech-Loaded Carbine which used the percussion ignition system. The gun was remembered as the “monkey tail” carbine due to its distinctive lever. He had his design entered in U.S. Army trials in 1857 and 1858 but it finished as a runner up compared to the Burnside Carbine. Despite this, the army did place an order for 1200 units and the Joslyn M1855s would be pressed into service when the Civil War broke out.

Following the Civil War’s outbreak Joslyn moved to Connecticut and formed Joslyn Fire Arms co. where he manufactured thousands of firearms for the Union military. In 1862 he designed the M1862 carbine which used a rimfire cartridge rather than the percussion ignition system. He also developed an army revolver (.44 caliber) which he sold to the military. His final contribution was the Model 1864 carbine (on auction here) which featured a few minor improvements over the Model 1862. The main problem with the M1862 was that its friction breech block was prone to inadvertently opening, so on the M1864 Joslyn redesigned the breech block with a pull-knob instead which rectified the problem. Almost all of the M1864 were delivered in time to see service in the Civil War, despite being manufactured relatively late in the conflict. Unfortunately, Joslyn had come to rely on government contracts and his business went under after the Civil War ended with his assets sold at Sheriff’s sale in 1868.

This is a nicely preserved example of the Model 1864 carbine. The markings remain clear despite some oxidation and the action functions correctly. This is a great Civil-War military firearm that should appeal to fans of historical firearms. Good luck on your bid!