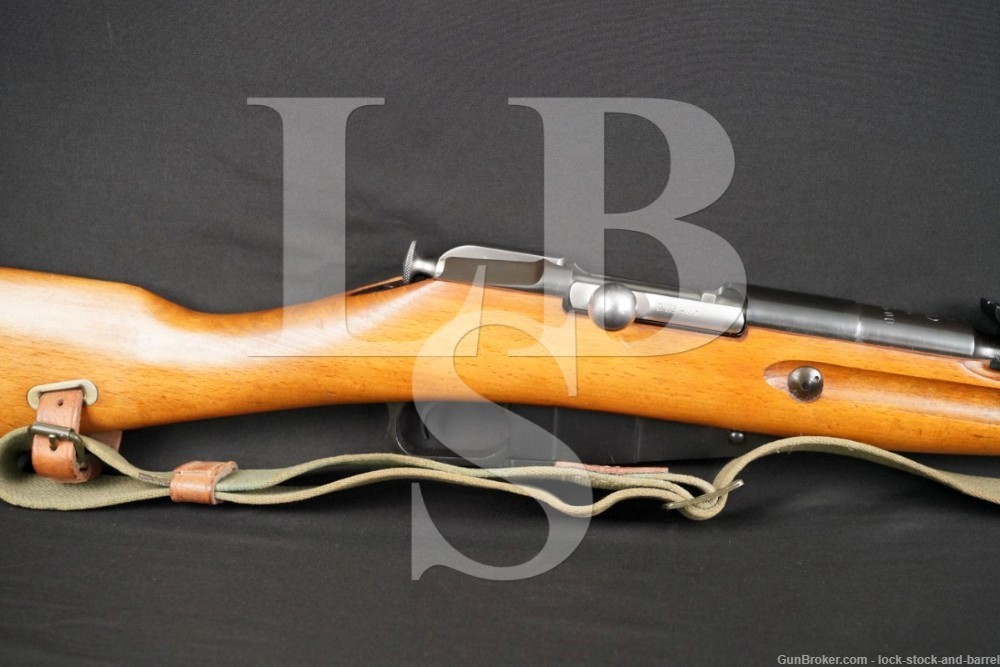 Markings: The barrel shank is marked with a diamond marked “PW /3” which was an acceptance mark,  “11” inside an oval which is the code for the Arsenal at Radom, the date code “1955” and the serial number “AD5600”.  The left side of the receiver is marked with the importer’s stamp “CDI SWAN VT MOD.44 7.62x54R MADE IN POLAND”. The bolt is serial matched to the barrel shank. The magazine and butt-plate are serial matched.

Sights/ Optics: The front sight is a dovetailed post on a ramp with a protective hood. There is also a tangent leaf rear sight with “U”-notch which is graduated in 100s of meters marked from 1-10, inclusive.

Stock Configuration & Condition/ Grip: The stocks are two-piece smooth wood featuring a forend cap, a handguard, a slot in the forend for a cleaning rod (no cleaning rod is included), two barrel band springs, two barrel bands, finger grooves on the forend, a through bolt, a straight wrist, a slightly raised comb and a metal buttplate. There is a sling eyelet on the forend and one on the butt. The stocks have only light handling marks and lack any notable defects. There are no chips or cracks. The LOP is 13.5” from the trigger to the rear end of the buttplate. The butt-plate has some light handling marks. Overall, the stock is in Very Good-Fine condition.

Bore Condition: The bore is mostly-bright with sharp rifling. There is only light erosion concentrated in the grooves.

Overall Condition: The rifle retains about 95% of its metal finish. There are some light handling marks, nicks and scuffs. The markings remain clear. The screwheads are only lightly tooled and serviceable. Overall, the rifle is in Very Good-Fine condition.

Box Paperwork and Accessories: There is a folding cruciform bayonet fixed to the front of the barrel. The bayonet has some light handling wear and it remains in Very Good condition. There is an olive drab sling attached ot the stock held in place by two “dog collar” attachments. The sling has some light handling marks but it remains in Very Good condition.

Our Assessment: This Radom Arsenal Mosin Nagant Model 1944 is a bolt-action with a fixed magazine chambered for 7.62x54R rounds. The Polish People’s Republic was established in 1947, several years after the Red Army seized the country from the retreating Germans in WWII. The country’s new military was made up of Polish soldiers under the command of mostly Soviet officers. The most senior general in Poland was initially Soviet Marshal Konstantin Konstantinovich Rokossovsky who served as the nascent Communist state’s Defense Minister and Deputy Chairman of the Council of Ministers until 1956. The country produced M44s under license from 1950 until at least 1962, and they were still being used as training rifles for the military as late as the 1980s. The Polish rifles generally have less wear than the older Soviet equivalents and this one is no exception. The rifle has a nicely preserved bore and remains mechanically sound. This is a piece of Polish and Cold War history you do not want to miss out on!