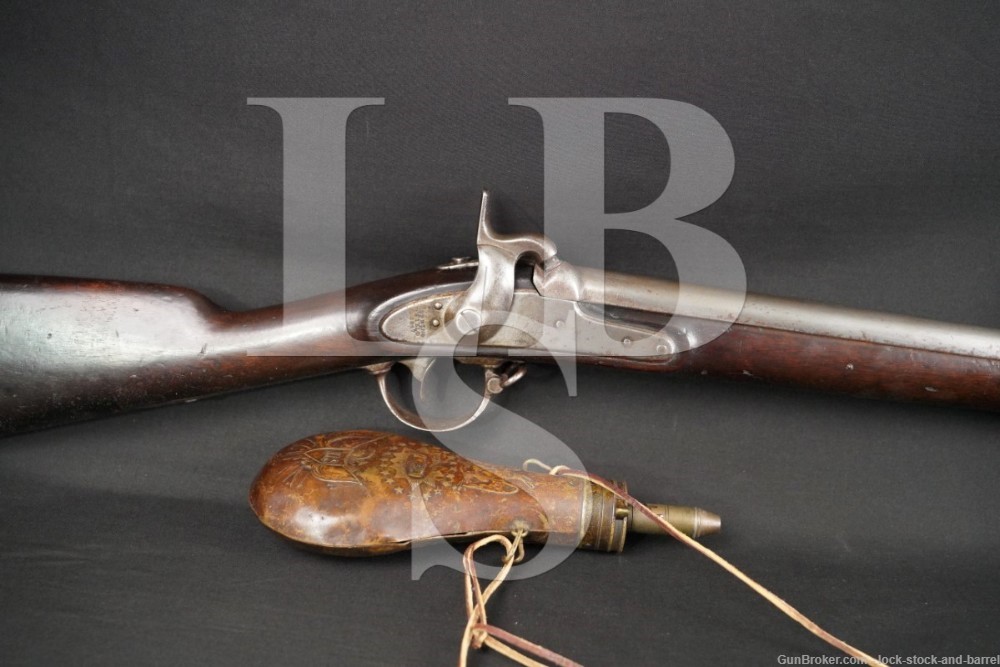 Stock Configuration & Condition/ Grip: The stock is one-piece featuring a metal nose-cap secured by a spring, a slot in the forend for a ramrod, to barrel bands secured by springs (the forward barrel band has a sling swivel), a lock-plate secured by two screws, a straight wrist, a sling swivel fixed to the front of the trigger guard, a straight comb and metal butt-plate. The stock has light-moderate handling marks, nicks and scuffs. Notably, there is scattered light-moderate wear between the nose-cap and forward barrel band, a moderate crack from the woodline that extends towards the center of the side-plate, a light crack from the side-plate that extends onto the stock which is slightly above the aforementioned, several light dings behind the side-plate, scattered light-moderate compressions on the butt and there is light crack ahead of the rear barrel band’s spring. The LOP is 13.5” from the trigger to the rear of the butt-plate. The butt-plate is coated in moderate surface oxidation and handling marks. Overall, the stock is in Very Good condition for an Antique.

Bore Condition: The bore is semi-bright with scattered light erosion.

Overall Condition: The musket has no metal finish. There are scattered light-moderate handling marks, nicks and scuffs. Notably, there is erosion concentrated on the sides of the barrel at the wood line but the barrel remains mostly bright at the top and bottom. The nipple is coated in light surface oxidation but it remains serviceable.  Overall, the musket is in Very Good condition for an Antique.

Box Paperwork and Accessories: There is a ramrod included with the musket and a brass powder flask. The powder flask has standard US military markings and is marked with the date code “1848”. The flask is largely tarnished, coated in light surface oxidation and has gaps that have developed along the sides of the flask where it was originally assembled. Overall, the flask is in Good condition.

Our Assessment: The Springfield Model 1842 was a percussion ignition musket that was manufactured from 1844-1855. The gun was based on French Muskets with a similar stock pattern. It was the last standard issue smoothbore musket to be made at US Arsenals which was chambered for the .69 caliber balls and was made with fully interchangeable parts. Although a small portion of the Model 1842s production was subcontracted, most were made at Springfield and Harpers Ferry arsenals. The gun saw service during the Mexican-American War (ca. 1846-1848), and continued to be used as late as the American Civil War. Some surplus Model 1842 muskets had rifling added in the late 1850s to support the modern, and more accurate, .58 caliber Minié round, but many remained in their original configuration.

This particular specimen has a barrel and lock which are not matching. The top tang is marked “1849” while the lock-plate is marked “1847”, indicating the gun needed replacement parts during its service life. The Model 1842 was made with interchangeability in mind, thus it is not uncommon to see replacement parts with date codes that do not match. The side-plate and stock have some markings which were added by a prior user, but the gun remains a nicely preserved 19th century musket. This is a great option for historical firearms collectors. Good luck on your bid!