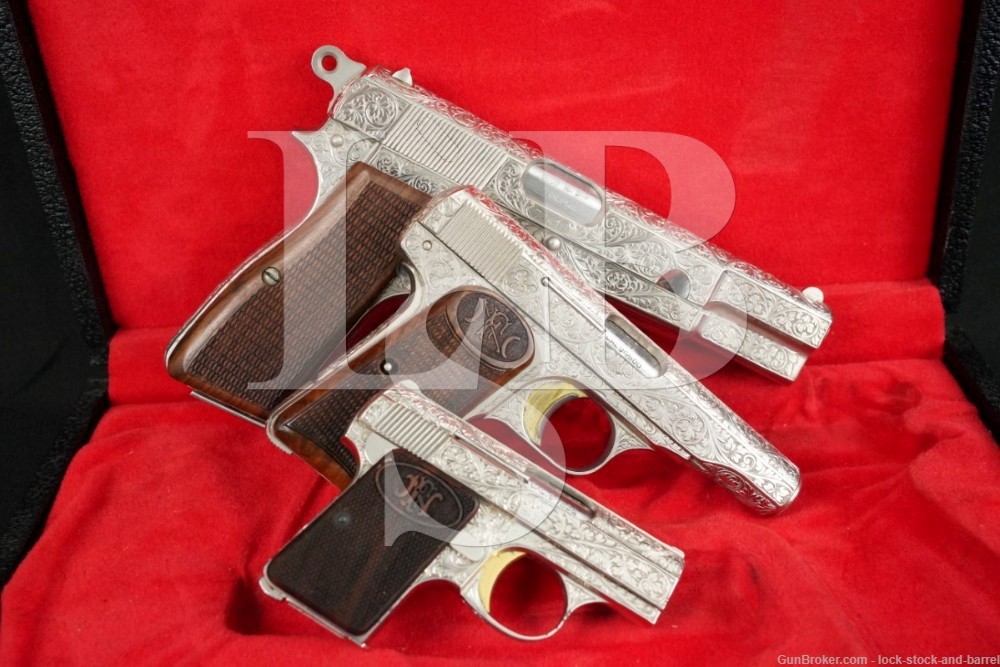 HE016: The front sight is a short blade at the front of a shallow groove that spans the length of the slide. The rear sight is an integral U-notch at the rear of the groove. The groove is serrated to reduce glare.

Stock Configuration & Condition: HE015: The grips are two piece checkered wood panels. The grips show no significant imperfections and the checkering is sharp. There are no chips or cracks. The grips rates in about Excellent condition.

HE016: The grips are checkered wood panels with “FN” logos at their tops. The grip panels show a couple light handling marks but no significant imperfections. There are no chips or cracks. The checkering is sharp. The grips rate in about Excellent condition.

HE017: The grips are checkered wood panels with “FN” logos at their tops. The grip panels show a couple light handling marks but no significant imperfections. There are no chips or cracks. The checkering is sharp. The grips rate in about Excellent condition.

Bore Condition: The bores are bright with sharp rifling. There is no erosion in the bores, just a bit of light fouling.

Overall Condition: These handguns retain about 98% of their metal finish. Each shows some light handling marks and minor operational wear. The screw heads are sharp. The markings and engraving are crisp. Overall, these handguns rate in about Excellent condition.

Mechanics: The actions on all three pistols function correctly. We did not fire these pistols. As with all used firearms, a thorough cleaning may be necessary to meet your maintenance requirements.

Box, Paperwork & Accessories: These pistols come in a black display case lined with red felt and has a brass plate marked “Automatics by  / BROWNING / St. Lois, Mo.”. Each pistol also comes with a single magazine.

Our Assessment: This beautiful three-gun Renaissance pistol set from Browning features the infamous Hi-Power and Baby Browning pistols, as well as the less common Model 1955 which is based on the Model 1910.

The Browning Hi-Power is a single-action, semi-automatic handgun. It was based on a design by American firearms inventor John Browning, and completed by Dieudonné Saive at Fabrique Nationale (FN) of Herstal, Belgium. Browning died in 1926, several years before the design was finalized. FN Herstal initially named the design the “High Power”, which alludes to the 13-round magazine capacity, almost twice that of other designs at the time, such as the Luger or Colt M1911.

In 1955, the Browning Arms Company introduced the Model 1910 pistol for the American market as the Model 1955. Made in Belgium, this model was virtually identical to the European model except for the markings and grips. Importation ceased in 1968 due to the passage of stricter gun-control laws in the U.S. Like its predecessor, the FN Model 1910, the Model 1955 is a blowback-operated, semi-automatic pistol based on the design by John Browning.

This beautifully engraved set is a testament to the craftsmanship and attention to detail that the Browning company has come to be known for. Don’t pass up on the opportunity to bring home this vintage set because who knows when an opportunity like this will present itself again. Please see our photos and good luck!