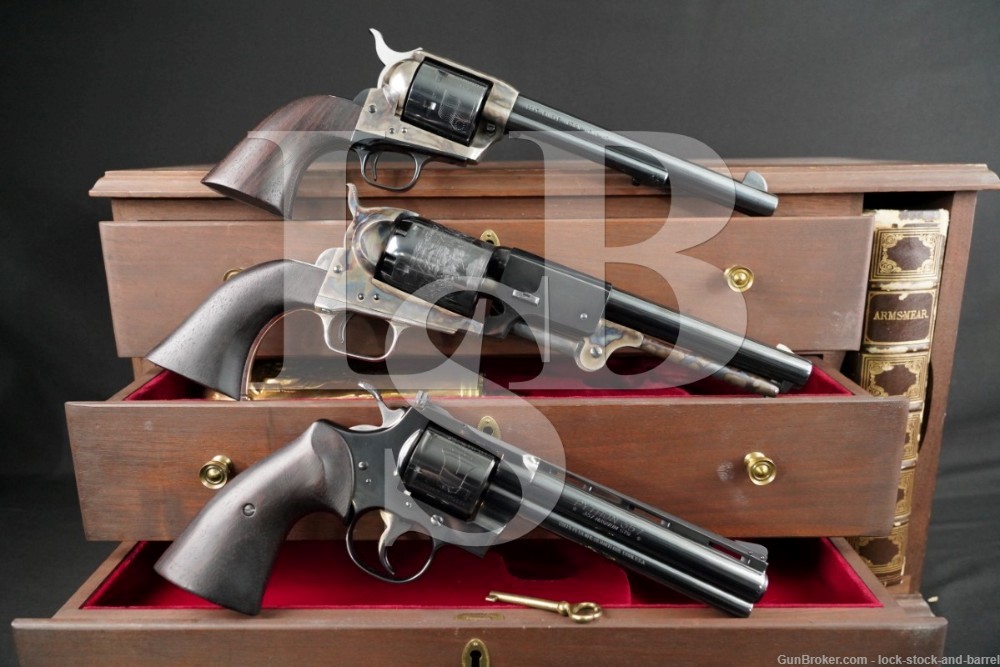 Dragoon: This revolver retains about 97% of its metal finish. The silver plate on the grip frame has darkened, but should still polish bright. Otherwise, there are only a few scattered minor marks. The screw heads are sharp. The markings are clear. Overall, this revolver is in Fine-Excellent condition.

Single Action Army: This revolver retains about 98% of its metal finish. There are a few light handling marks on the barrel, most notable at the edge of the ejector housing on the bottom. The screw heads are sharp. The markings are clear. Overall, this revolver is in Excellent condition.

Python: This revolver retains about 99% of its metal finish. There is no notable wear or damage, only light handling marks. The screw heads are sharp. The markings are clear. Overall, this revolver is in Excellent condition.

Box, Paperwork & Accessories: The Original Factory Wood Three-Drawer case is included. Each drawer is velvet lined and has a lock, the key is included. The Dragoon’s drawer includes a powder flask, bullet mold, cap tin and nipple wrench. Also in the case is a leather-bound book, marked “ARMSMEAR” on the spine. This book is “The Home, the Arm, and the Armory of Samuel Colt. A Memorial.” The case has some scattered minor storage wear from storage. One of the top rear corners has an impact mark. The book shows more notable wear.

Our Assessment: This may be the most important set for Colt collectors produced. The set encompasses the three quintessential firearms from three generations of Colt revolvers. The Dragoon was designed as a solution to numerous problems encountered with the Walker Colt. Although it was introduced after the Mexican-American War, it became popular among civilians during the 1850s and 1860s, and was also used during the American Civil War. It was the first of the heavy hitting revolvers that became practical for military use. The Colt Single Action Army represents not only a generation of Colt Production, but an Era of American History. The Colt helped tame the West and the 7 1/2” .45 LC SAA is a gun that elicits feelings of the Old West upon sight. The Python was the next generation. This gun shows the finest of Colt’s Modern Double Action Revolver design and manufacturing. The Colt Python is desirable. It was first introduced in 1955, the same year as Smith & Wesson’s M29 .44 Magnum. The Colt Python targeted the premium revolver market segment. Some firearm collectors and writers such as Jeff Cooper, Ian V. Hogg, Chuck Hawks, Leroy Thompson, Renee Smeets and Martin Dougherty have described the Python as the finest production revolver ever made.