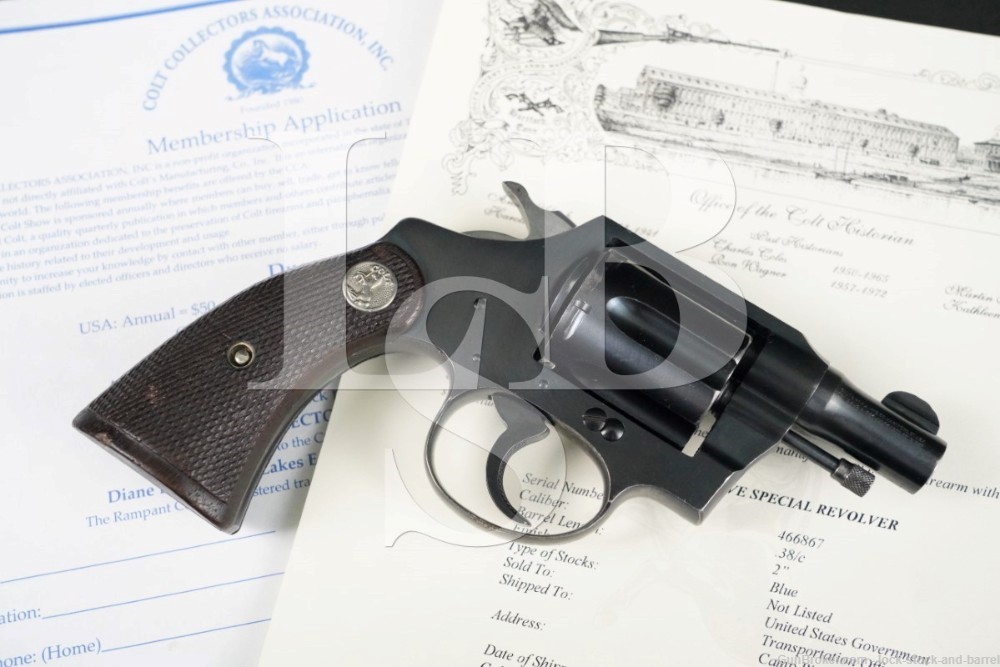 Stock Configuration and Condition: The grips are two-piece checkered walnut with silver colored Colt medallions at their tops. The grips have some light nicks and scratches with some wear in the checkering at the edges. The checkering is generally well defined. There are no chips or cracks. Overall, the grips are in Very Good condition.

Overall Condition: This revolver retains about 90% of its metal finish. The finish is thinning at all edges. There are some scattered minor nicks and scratches. The grip straps show light handling wear and there is scuffing on the butt. There are a few patches of light surface erosion at the top of the frontstrap and on the bottom of the trigger guard. The action shows minor operational wear including a thin turn-line on the cylinder. The screw heads are lightly tool marked with strong slots. The markings are clear. Overall, this revolver is in Very Good condition.

Box, Paperwork, and Accessories: This revolver comes with a Colt Archive letter confirming that this revolver shipped in its present configuration on February 24, 1944 to the Transportation Officer of Camp Ritchie in Highfield, Maryland for the Military Intelligence Corps Depot as one of 800 guns of the same type in the shipment.

Our Assessment: The Detective Special had been very popular with law enforcement and civilians who carry a concealed revolver as it allowed for a six-shot revolver in the same frame size as other revolvers which only offered a five-round capacity. This example is a little more interesting, having been shipped to Camp Ritchie during WWII.

It’s not clear whether this example stayed stateside or went overseas, but it was delivered just a few months before the D-Day invasion, during and after which many Camp Ritchie trained operatives entered Europe. For collectors of WWII military and clandestine weapons, this is a wonderful and well documented find. Good luck and happy bidding!