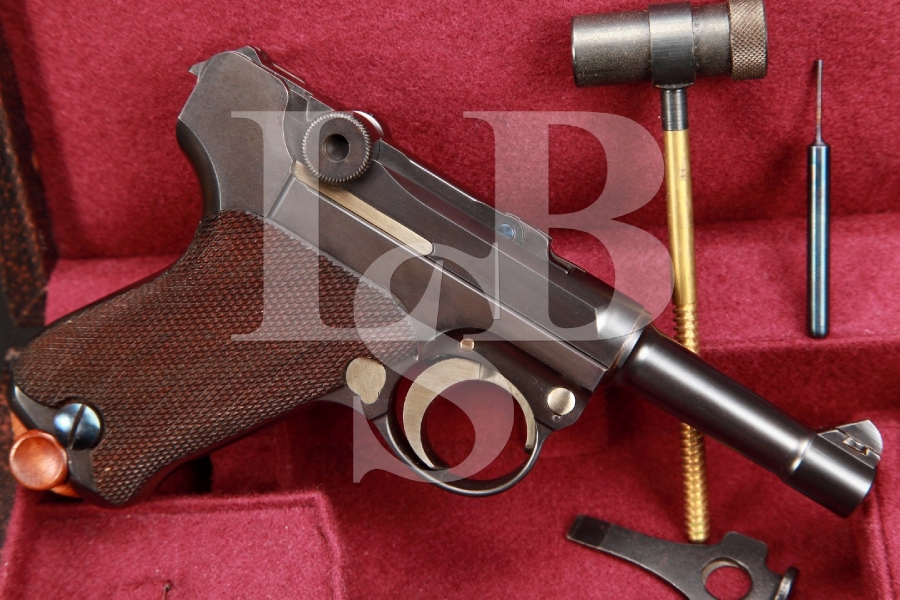 Markings: The front of the frame below the barrel is marked “6”.

Sights / Optics: The front sight is a blade dovetail set to a banded base at the front of the barrel. The slightly ramped back edges of the blade and its base are serrated. The rear sight is a “V” notch at the back of the rear toggle.

Stock Configuration & Condition: The grips are checkered walnut. There is extremely light wear in the checkering, which is still sharp to the touch. There are no mars. The grips rate in about Excellent overall condition.

Overall Condition: This pistol retains about 99+% of its metal finish. There are no marks in the finish. The screw heads are sharp and the markings are clear. Overall, this pistol rates in about MINT condition.

Box, Paperwork & Accessories: This pistol comes in a leather covered case with chrome hardware and a leather carrying handle. The lid has two hinges on the back and is secured with two non-locking latches at the front. The bottom of the case has four chrome plated feet at its corners. There is a shallow compression mark and a light scuff mark in the lid and a few shallow compression marks on the bottom of the case. The inside of the case is lined with purple felt which is fitted for this pistol and its accessories. There are no marks in the felt lining. The accessories include a magazine, a takedown tool, a tiny punch and a small hammer with a brass handle that doubles as a jag. The magazine is nickel plated with a wooden bottom piece. It shows only minor marks, and the bottom piece is unmarked. It is in Excellent condition. The punch has a fire blue finish. It and the other accessories appear in AS-NEW condition.

Our Assessment: From http://www.krausewerk.com/32acpbabyluger.html: “The Holy Grail of Luger collecting has always been the one extant .45 ACP Luger as made by Deutsche Waffen und Munitionsfabriken (DWM) for the U.S. Army’s 1907 pistol trials, which led to the adoption of the 1911. A second Luger that is almost as scarce — there are two known — exists. It is the Baby Luger, of which four or five were made in the DWM model shop sometime during the mid-20s. There were at least two in .32 ACP and three in .380 ACP. These tiny Lugers never made it to market, however, and speculation is that the manufacturing costs were far beyond what the market would bear. One of these pistols in .32 ACP was brought home from Japan in the 1950s of all places by a U.S. Army Colonel, and was eventually sold to a prominent Luger collector. It was this pistol that Michael Krause of Krausewerk in San Mateo, Calif. chose as the gun to blueprint for his recreations in 1998.” This is one of 100 (Serial Number 6) Baby Luger pistols created by Mike Krause. It is blued with a straw colored safety, trigger, takedown latch, magazine release and ejector. The grip screws are fire blue. The grips are checkered walnut just like the original. We cannot tell for sure if the pistol was ever fired outside the factory or not, but if it was, it certainly wasn’t fired very many times. There are no marks in the pistol and only the faintest of wear in the checkering on the grips. The magazine is nickel plated with a wooden bottom piece just like the early originals. The pistol comes in a leather covered carrying case with accessories. Please see our pictures to get an idea of how nice this set really looks!! This pistol is really an exquisite piece, suitable for the most discriminating Luger collector and probably the only way some can complete their collection. There were only 100 made, though, which makes this pistol collectable in its own right. Don’t let this one get away – you might not ever get another chance.