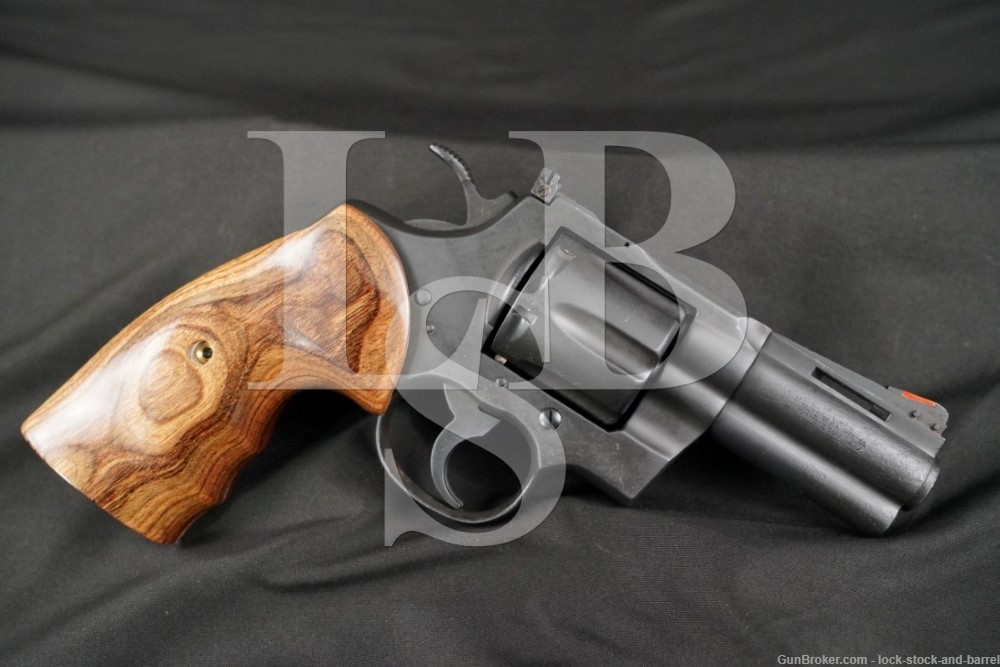 Action Type: Single/Double-Action Swing-Out Revolver with a 6-Round Cylinder and Extractor

Sights/ Optics: The front sight is a pinned blade with a reddish orange attachment. The rear sight is an adjustable screw-set square-notch fixed to the top-strap.

Stock Configuration & Condition/ Grip: The aftermarket grip is two-piece wood with finger grooves. The grip has some light handling marks, but they lack any notable defects. There are no chips or cracks. Overall, the grips are in Fine condition.

Bore Condition: The bore is semi-bright with sharp rifling. There is light pitting concentrated on the top of the bore.

Overall Condition: The gun retains about 80% of its metal finish. There are light handling marks, nicks and scuffs. Notably, there is pitting visible under the finish around the barrel, on half the cylinder and the lower right side of the frame. Also, the cylinder has developed a turn-line. The Rampant Colt logo is faded, but the remaining markings remain clear. The screwheads are only lightly tooled and remain serviceable. Overall, the revolver is in Very Good condition.

Mechanics: The action functions correctly. The single-action is crisp and the double-action is smooth. The cylinder locks with barely palpable play on each chamber. We have not fired this revolver. As with all used firearms, a thorough cleaning may be necessary to meet your maintenance requirements.

Our Assessment: In 1955, the United States launched the first nuclear-powered submarine, West Germany joined NATO, a condensed radio dramatization of The Lord of the Rings was broadcast in twelve episodes on BBC Radio’s the Third Programme, and Colt began shipping the finest precision combat and target revolver ever made. Each revolver was hand-tuned at the factory and this attention to detail is exemplified both cosmetically and in operation. With barrel lengths ranging from 2.5? to 8” (this is a Combat Python from 1988 with a 3” barrel) and with some of the finest machining and finishing ever seen in the industry, the Python has earned its reputation and continues to be sought after to this day. The Colt Python revolvers are no longer being made like the originals, so the price for these fantastic weapons are just going to continue to appreciate. The revolvers by themselves are becoming harder and harder to find, making it difficult to bring oneself to actually fire a Python. This revolver from 1988 has seen some use with pitting visible under the new matte finish which has been applied to the gun. It is a Combat Python chambered for .357 magnum cartridges and should prove a worthy companion to its next user. This is one revolver that Colt fans will not want to miss out on!