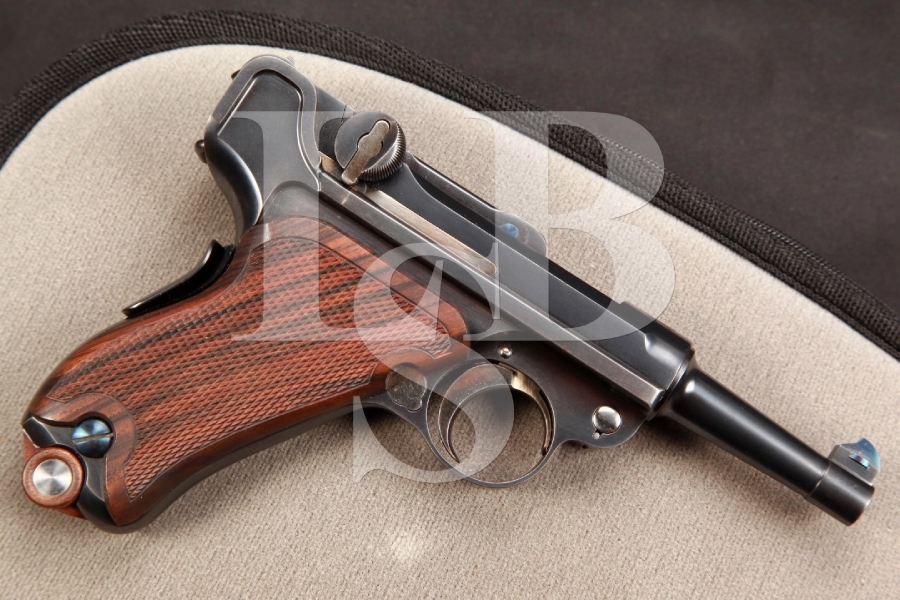 Make: The original manufacturer of the pistol was DWM. It was refinished and remarked by John Martz.

Model: The original model designation is unknown. Its current configuration is that of the American Eagle Model 1900.

Year of Manufacture: The pistol was originally manufactured between 1900 and 1942; remarked and refinished by John Martz in 1994.

Sights / Optics: The pistol is mounted with a “V” notch in the back of the toggle and Patridge style blade dovetailed to a base on the front barrel band.

Stock Configuration & Condition: The grips are checkered walnut that have a beautiful dark grain running through the panels. The checkering is sharp and without mars. The grips rate in about Excellent overall condition.

Type of Finish: The finish is blue. The safety, trigger, takedown lever, magazine release, extractor and ejector are straw colored. The pins holding the front toggle to the breechblock and the rear toggle to the receiver have a fire blue finish.

Finish Originality: The finish is original as applied by John Martz

Bore Condition: The bore is bright and the rifling is sharp and deep. There is no erosion in the bore.

Overall Condition: This pistol retains about 99+% of its metal finish. There is a slight mark on the left side of the frame under the safety and a light mark on the right side of the frame below the toggle. The serrations and checkering on the toggle knobs, takedown lever and safety are sharp. The grip screws are sharp and the markings are clear. Overall, this pistol rates in about Mint condition.

Mechanics: The action works correctly. This pistol has both a manual and a grip safety. Its action is the same as on the early 1900 pistols: To open the action, one must pull back on the toggle knobs until the catch lever in the right toggle knob clears the catch on the frame, and then pull back and up. We have not fired this pistol.

Box, Paperwork & Accessories: This pistol comes with a single magazine and a soft pouch. The magazine has an in-the-white finish and a wooden bottom piece marked with “JVM” in an oval and “2”. It is in Excellent condition without significant wear and the bottom piece is without marks. The pouch is padded with a black coated aluminum zipper. It has a gray velvet exterior with black trim and a smooth nylon interior. There is a compression mark on the outside of the case and the inside shows light oil staining. The case is in about Fine overall condition.

Our Assessment: Custom gun maker John V. Martz passed away in 2013. He served in the Navy in WW2, and then worked as an aircraft sheet metal worker for 25 years. In 1968 he started working on Lugers and P-38s as a hobby. He invented the Martz Safe Toggle Release, which one author once said was the one improvement George Luger should have thought of, but didn`t. John was a self-taught gunsmith and went on to create many beautiful Luger and P-38works of art. He only used worn finish or mismatched Lugers as “donor guns”, sometimes cutting two pistols in half off-center to make one large frame .45 caliber Luger. He is said to have never cut-up a collectible piece. This pistol was put together to closely resemble the American Eagle Luger Model of 1900, but is “different” enough to make it easy to determine that the finish and condition of the pistol are not original. It is chambered in 7.65 Luger, like the original American Eagle, with a four digit serial number and 3” barrel, but the original American Eagle had a 4 ¾” barrel and proof marks, which this pistol is lacking. It is highly likely that this pistol did start its life as an American Eagle Model of 1900, and was re-barreled and refinished, especially with the “Germany” identification on the front of the frame, although it could started as a different model completely. The end result, though, is really a thing of beauty unto itself. With its straw coloring on the small parts and fire blued toggle pins, it is as nice looking as anything that came out of Deutsche Waffen und Munitionsfabriken. It is in about Mint condition with only two light marks in the pistol, one under the safety and the other on the right side of the frame under the toggle knob. The grip panels are unmarked and the bore is bright and sharp. This is too pretty to take out and shoot – it deserves a spot in a Luger collection next to its cousins. It can also be used to start a John Martz collection: he refurbished and re-made many different models as well as custom .45 ACP Lugers