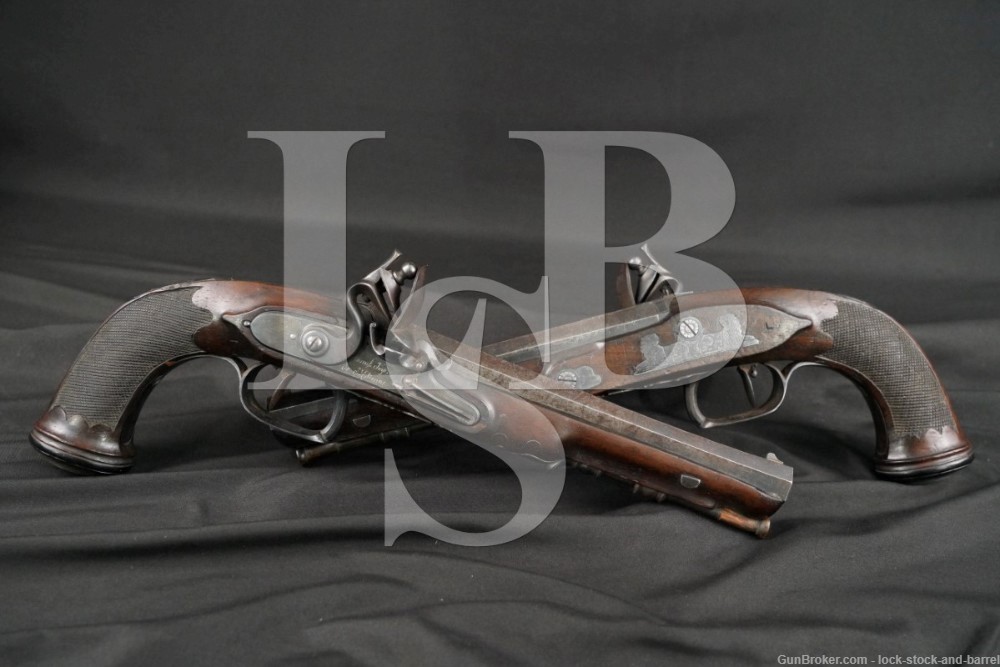 Caliber: .55 Caliber on both handguns

Sights/ Optics: The guns have identical sights. There is a blade fixed by the muzzle and three “V”-notch leaves on the top tang. The front and rear leaf are both folding with the center leaf fixed in the up position.

Stock Configuration & Condition/ Grip: The stock has identical features on both guns. The stock features a ferrule to hold a ramrod in addition to a metal capped provision for a ramrod in the forend, a forend wedge by the front of the stock, a lock-plate and a checkered pistol grip with wood cap.

220519DW003: This pistol’s stock has some light handling marks, nicks and scuffs. Notably, there is a small chip at the upper right tip of the forend by the muzzle, a light crack that extends from the rear tang of the trigger guard onto the right side of the grip with a small patch of wood filler were it originates, a light ding on the right side of the medallion on the back-strap in addition to a slight crack on the left side that extends to the checkering on the grip and a patch of wood filler on the left side of the grip between the rear tang of the trigger guard and grip’s checkering. The checkering remains motley sharp. Overall, the pistol’s stock is in Very Good-Fine condition for an Antique.

220519DW004: This pistol’s stock has some light handling marks, nicks and scuffs. Notably, there is a light crack on the right side which extends from the tip of the forend across the wedge, there is some light wear surrounding the back-strap’s medallion and an “L” shaped nick on the left side of the forend. The checkering remains sharp. Overall, the stock is in Very Good-Fine condition for an Antique.

Type of Finish: Damascus with Silver and Brass decorations

Bore Condition: On both guns the bores are both semi-bright with sharp fouling grooves. There are scattered light patches of surface oxidation concentrated in the grooves.

Overall Condition: 220519DW003: The gun retains about 15% of its metal finish. The Damascus finish on the barrel is still visible in some areas, but it has been obscured by surface oxidation. The brass parts are lightly tarnished and coated in verdigris. The gun has some light handling marks, nicks and scuffs. Notably, there is light wear along the leading edges, the silver parts are mostly discolored and there is light surface oxidation on most of the metal surfaces. The markings remain clear. The screwheads are only lightly tooled and remain serviceable. Overall, the pistol is in Fair condition for an Antique because of an issue with the action.

220519DW004: The gun retains about 30% of its metal finish. The Damascus finish on the barrel is visible underneath the light surface oxidation but is mostly obscured. The brass parts are lightly tarnished and there are a few spots of verdigris on the leaves on the back-strap. The silver parts are mostly discolored and have some light handling marks. The gun has some light handling marks, nicks and scuffs. Notably, there is light handling wear along the leading edges. The markings remain clear. The screwheads are only light tooled and remain serviceable. Overall, the pistol is in Very Good condition for an Antique.

Mechanics: 220519DW003: There is an issue with the mainspring and when the hammer is fully cocked it immediately snaps to the down position, although the half-cock safety does engage. We have not fired this pistol. As with all used firearms, a thorough cleaning may be necessary to meet your maintenance requirements.

220519DW004: The action functions correctly. We have not fired this pistol. As with all used firearms, a thorough cleaning may be necessary to meet your maintenance requirements.

Box Paperwork and Accessories: The guns both come with animal bone tipped ramrods. The tip of DW004 has a moderate crack on its tip and is mostly discolored while DW003 retains more of its original coloring but also has a light crack and some reddish discoloration on the tip.

Our Assessment: During the reign of Napoleon I (circa 1804-1815) the French Emperor was known for lavishly rewarding officials who were believed to have performed well. Among the many gifts Napoleon bestowed upon subordinates were dueling pistol sets. This particular set of dueling pistols were manufactured at St. Etienne Arsenal and likey gifted to a lucky official at the height of Napoleon’s rule after he was crowned Emperor in 1809, the lock’s are marked with Imperial markings which were used during the reign of Napoleon I (1809-1814). These pistols are extravagantly decorated with beautiful engravings and finished with damascus barrels. Unfortunately one of the pistols has a damaged mainspring, but they remain impressive display items and one of them still functions normally. These gun’s do not come with their display case, accessories or paperwork so we are unable to give a more thorough history on them. They are still beautiful pieces, crafted with unparalleled skill that should make a wonderful addition to any historical firearms collection. Good luck on your bid!