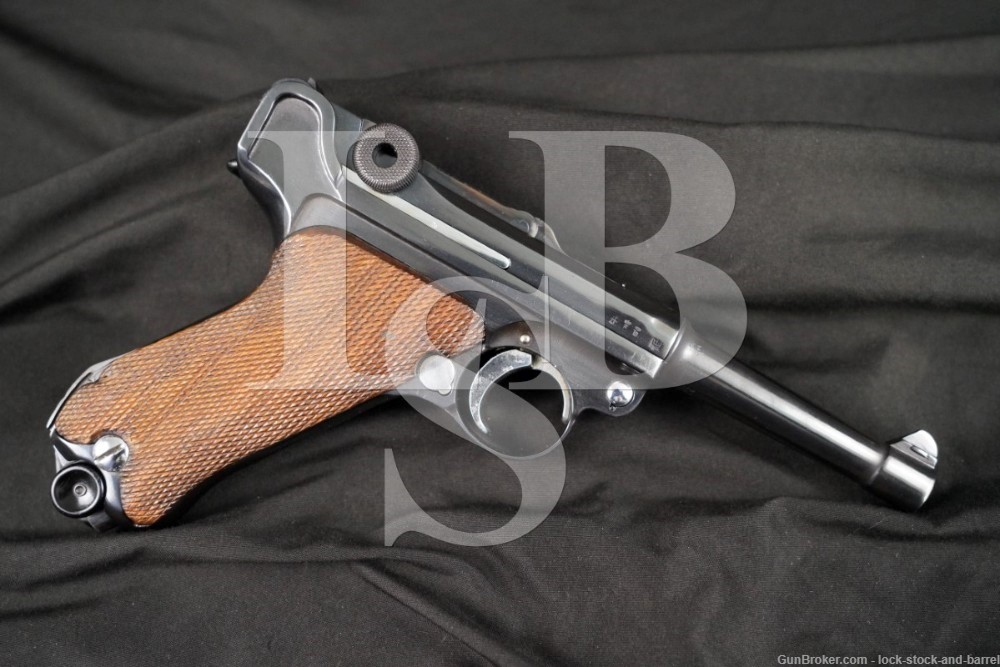 Stock Configuration & Condition/ Grip: The refinished grip panels are two-piece checkered wood. The grip panels have light handling marks, nicks and scuffs. Notably, there is a small chip on the lower rear portion of the right panel. The checkering remains mostly sharp. Overall, the grip panels are in Very Good condition.

Bore Condition: The bore is grey with mostly sharp rifling. There is scattered light pitting and light erosion concentrated in the grooves.

Overall Condition: The pistol retains about 90% of its metal finish. There are a few scattered light handling marks, nicks and scuffs. Notably, the finish has worn off at the muzzle, some finish loss on the left side of the frame ahead of the trigger side-plate and on the trigger side-plate. Also there is some light wear on the back-strap and there is pitting visible under the new finish on the trigger. The markings remain clear. The screwheads have tool-marks but they remain serviceable. Overall, the refinished pistol is in Very Good condition.

Box Paperwork and Accessories: The pistol comes with a single 8-round magazine which is not original to the pistol. The magazine has WWII-era NSDAP markings on the left side “fxo”, an eagle above “37” and “P08”. Otherwise, the magazine has some light handling marks and remains in Very Good condition.

This particular Luger was manufactured originally in 1917 before being re-accepted for service during the Weimar-era in 1920 with the Reichswehr (this can be ascertained from the chamber ring markings). The Reichswehr was the post-WWI German military which had a number of restrictions placed upon it by the Versailles Treaty and it relied primarily on WWI-vintage equipment until Germany began to openly rearm following Hitler’s assumption of power in 1933. This handgun has almost entirely been refinished with a number of parts that are not serial matched (please see the markings section above) and a WWII-era NSDAP marked magazine which is not original to the handgun. This specimen retains the aesthetically pleasing appeal of a Luger while remaining both ergonomic and mechanically sound. This is a great option for fans of historical firearms. Good luck on your bid!