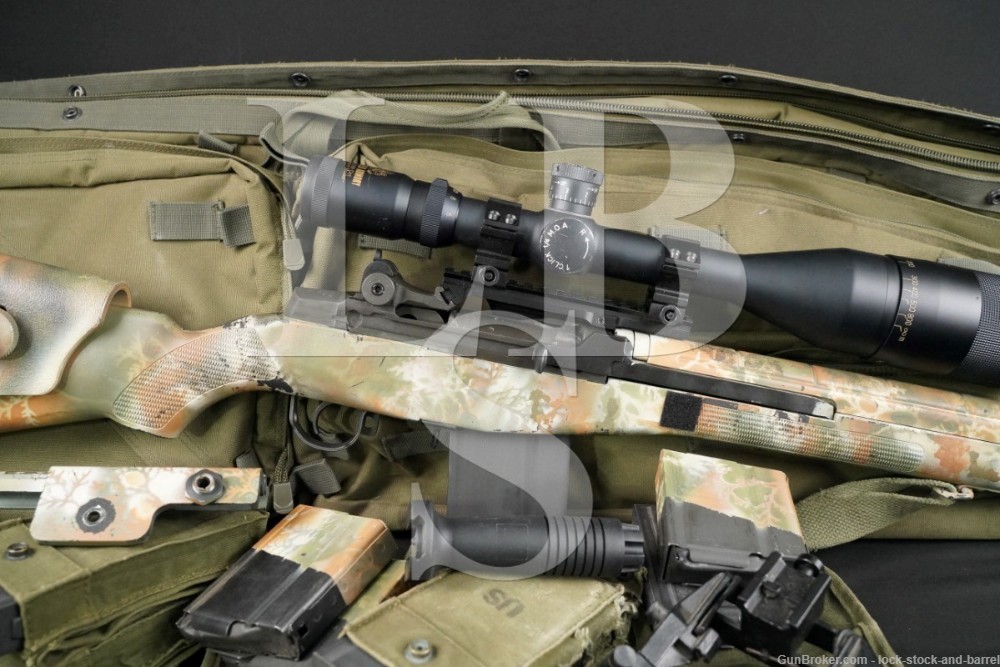 Sights/ Optics: The rear sight is a fully-adjustable aperture set between protective ears, the face of the right knob is marked “LEFT” twice between alternating curved arrows and “SA” underneath one of the curved arrows. The body of the left knob is marked with numbers 2-11. The front sight is a blade set between two protective ears that is dovetailed and screw set to a base which is integral to the muzzle break. Equipped to the top of the receiver via a Weaver-style side mounted rail is a Springfield Armory Government Model scope with a Mil Dot reticle and 6-20x magnification. The scope shows a few scuffs and scratches and the lenses are clear. The scope rates in about Very Good-Plus condition.

Stock Configuration & Condition/ Grip: The checkered synthetic stock has a pistol grip and uses a synthetic upper handguard. There are sling swivels mounted at the butt and on the forend with an attached green canvas sling. An adjustable cheek piece has been installed on the buttstock. The buttstock has a checkered metal butt plate that swivels up to reveal a second checkered buttplate underneath it. The second buttplate has a trapdoor covering two holes in the stock for storage of cleaning equipment. The stock has been refinished to a camo pattern. There are scattered spots of finish loss throughout, notably along certain leading edges and on the top of the grip. There are also scuffs and scratches that have removed small portions of finish. The checkering is sharp. There are no chips or cracks. The LOP measures 13 1/8 inches from the front of the trigger to the back of the buttplate. The plate shows light thinning along the leading edges. The stock rates in about Very Good overall condition as refinished.

Bore Condition: The bore is bright. The rifling is sharp. There is no erosion, just some minor fouling throughout.

Overall Condition: The rifle retains about 92% of its combined finish. There are scattered spots of finish loss on the barrel, gas chamber, and compensator. There are some light scratches scattered about the receiver. There is faint operational wear. The screw heads are sharp. The markings are crisp and clear. Overall, the rifle is in about Fine condition.

Box Paperwork and Accessories: This rifle comes with the previously mentioned installed scope as well as a green canvas soft case, a bipod, three 10-round magazines, and four 5-magazines.

Our Assessment: The Springfield Armory M1A is a semi-automatic rifle made by Springfield Armory, Inc., beginning in 1974, based on the M14 rifle, for the civilian and law enforcement markets in the United States. “M1A” is a proprietary name for Springfield Armory’s M14-pattern rifle. Early M1A rifles were built with surplus G.I. parts until Springfield Armory, Inc. began manufacturing their own. This Springfield Armory M1A Semi-Automatic Rifle takes .308 Winchester ammunition. This one has a refinished camo checkered synthetic stock that is in Very Good condition. It also comes equipped with a Springfield Government Model scope and includes a total of seven magazines, a bipod, and a green canvas soft case. The bore is bright and the mechanics are strong. This is a beautiful rifle that seems to have seen responsible use and maintenance. Please see our photos and good luck!