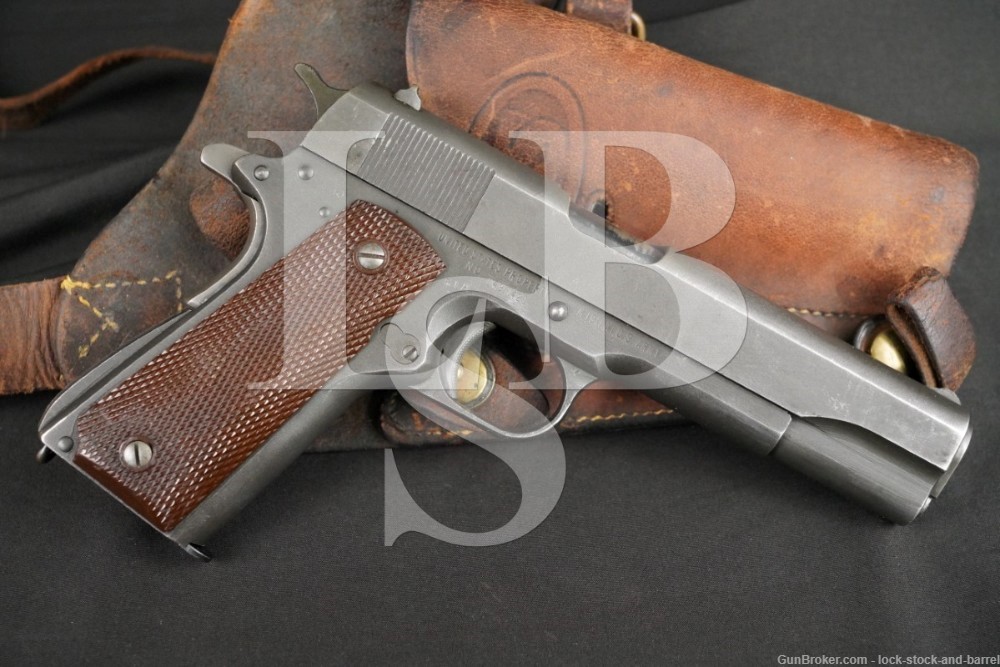 Sights / Optics: The front sight is a short blade fixed to the slide, the rear of the slide is serrated and ramped. The rear sight is a square notch dovetailed into the slide.

Stock Configuration & Condition: The grips are checkered brown plastic with reinforcement rings around the screws and reinforcement ribs on the inside. The grips show little in the way of handling wear. The grips have light handling wear with some scattered light nicks and scuffs. The checkering is well defined. There are no chips or cracks. Overall, the grips are in Very Good condition.

Bore Condition: The bore is mostly bright with sharp rifling. There is no erosion in the bore, but there is some stubborn fouling.

Overall Condition: This pistol retains about 85% of its metal finish. The finish is thinning at all edges. There are scattered nicks, scuffs and scratches. The grip areas show handling wear. There are a few more notable nicks at the rear of the right-side slide serrations. The action shows operational wear. The screw heads have finish wear, but have sharp slots. The markings are clear. Overall, this pistol is in Very Good condition as refurbished.

Box, Paperwork & Accessories: This pistol comes with a single 7-round magazine and a U.S.-marked Enger-Kress leather shoulder holster. The magazine has faint operational wear, intact feed lips and a strong spring. The holster shows scattered discoloration and wear, the stitching is intact. There is some minor surface cracking, but no tears.

Our Assessment: The 1911 and 1911-A1 pistols served the military of the United States from 1911 to 1985, through two World Wars and the Korean and Vietnam wars. They gained a reputation as a reliable handgun with plenty of stopping power, and are held in high regard by those who have used them. As was the case at the outset of the 1st World War, demands of the US Military would outstrip the production capacity of Colt when the United States entered World War 2. In this case, contracting pistol production out to other companies had been planned for and simplified due to educational orders and a production study, notably conducted by the Singer sewing machine company, which developed comprehensive plans and instructions for a company which had never made a 1911A1 to order materials, machinery and set up manufacturing for the pistol. Remington Rand was the star example of this project’s success, and by the end of the war would go on to produce just about as many as all of the other maker’s combined, at the lowest price and highest quality. This example has a frame made by Remington Rand in 1943 paired with an Ithaca Gun Company slide. The frame has a Rock Island Arsenal refurbish mark so it’s possible, even likely that the slide was paired to the frame during the refurbishment process. It is a nice example of a WWII-era 1911-A1 and also comes with a vintage shoulder holster. This would make a nice addition for a collector, but its good bore and strong mechanics should also make it a good shooter. Please see our photos and good luck!