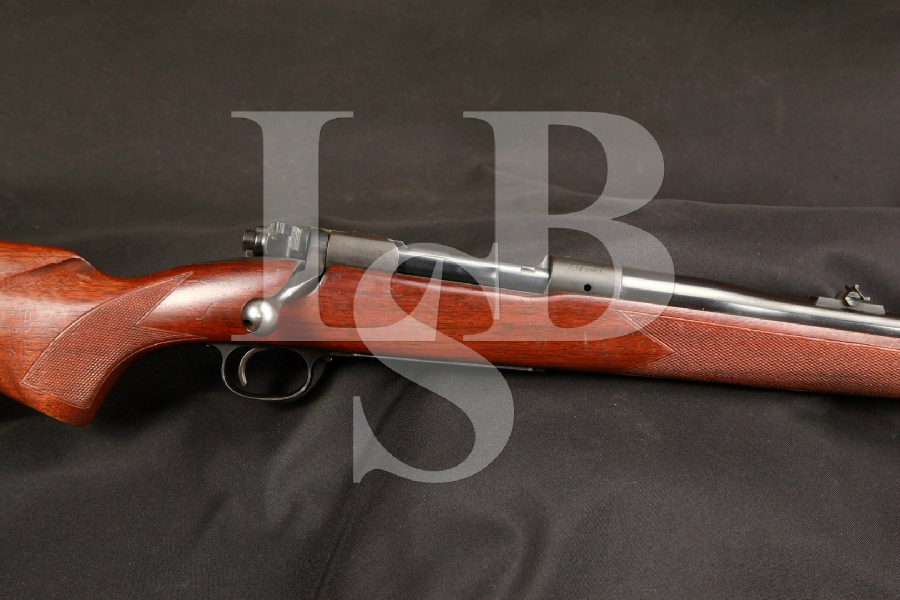 Sights / Optics: The front sight is a hooded beaded blade dovetailed into a serrated ramped base fixed to the barrel. The rear sight is a two leaf express sight with a shallow “V” cut into the tops of the leafs. There are two drilled, tapped and filled holes in the top of the chamber ring, two more in the top rear of the receiver and two more on the left rear of the receiver for mounting a scope or a receiver sight.

Stock Configuration & Condition: The one piece stock is dark checkered walnut with a lacquered finish, pistol grip and Monte Carlo comb. It has a red solid rubber recoil pad with black spacer marked “Winchester” and sling swivels mounted on the forend and near the butt. The buttstock shows scrape marks in the finish at the toe and several more on both sides of the stock and on the front of the grip. There are also several handling marks in the buttstock, with a compression mark below the checkering on the left side of the grip, another on the bottom left just behind the grip and a gouge in the belly just in front of the sling swivel. The forend shows handling marks on both sides at the receiver, with shallow compression marks on the right side below the front of the receiver and a few deep compression marks on the underside of the forend. The checkering shows light wear with a few tiny mars in both the grip and forend sections. The LOP measures 13 ½” from the front of the trigger to the back of the recoil pad, which still has some give on its edges and shows no wear other than slight oil staining. The recoil pad is in about Fine condition. The stock rates in about Very Good overall condition.

Type of Finish: The barrel, magazine floorplate and trigger guard are blue. The receiver has a matte finish. The top of the chamber ring has a finely serrated finish to provide a firm base for a scope mount.

Finish Originality: The finish appears original except for on the trigger guard. The rear tang shows grind marks under the finish and the inspection mark normally placed there is absent.

Overall Condition: This rifle retains about 90% of its metal finish. The barrel shows thinning on its front edge and several light handling marks between the muzzle and the forend with a few marks through the finish. There are light marks in the top of the receiver where scope mounts were previously located and thinning in the bolt knob. The magazine floorplate shows a sprinkling of surface frosting, light handling marks and thinning on its edges. The trigger guard shows a compression mark on its left edge, several handling marks and a few spots of surface loss. The safety serrations are sharp. The screw heads show marks of a screwdriver and the markings are clear. Overall, this rifle rates in about Fine condition.

Mechanics: The action functions correctly. This rifle has a two piece, 3-screw floorplate. We did not fire this rifle.

Our Assessment: This is a vintage Pre-1964 Winchester Model 70 chambered in .375 Holland & Holland Magnum with a 25” barrel. This rifle is in about Fine condition showing a few light marks on the barrel and receiver, with thinning and a sprinkling of surface frosting on the magazine floorplate and compression marks and marks through the finish in the trigger guard. The wood shows several compression and handling marks in its finish. The trigger guard may have been refinished – there are grind marks under the finish on its rear tang, and the inspection mark on the tang is missing. There are two drilled, tapped and filled holes in the top rear of the receiver, which Winchester began adding sometime around 1950, so they are definitely original to the gun. Also, the finish of the barrel is noticeably nicer than that on the rest of the gun, but the markings on the barrel are too sharp for it to have been refinished and the “56” date code on the barrel would indicate it was original to the rifle. The .375 H&H Magnum was only the second cartridge to wear a belt and was introduced in 1912. Per Wikipedia: “The .375 H&H often is cited as one of the most useful all-round rifle cartridges, especially in shooting large and dangerous game. With relatively light bullets in the region of 235 to 270 grains, it is a flat-shooting, fairly long-range cartridge ideal for use on light to medium game, whereas with heavy bullets of 300 grains and greater, it has the punch necessary for large, thick-skinned dangerous game.” This cartridge spawned a host of other belted magnums such as the .300 Winchester Magnum, 7mm Remington Magnum and most of the medium caliber Weatherby Magnums. (Some were made from the .300 H&H Magnum which was another direct descendant of the .375.) This is a very nice pre-64 Model 70 in one of the rarer calibers that are highly sought after by the collectors. No collection of Model 70’s would ever be complete without one chambered in .375 H&H, the most potent of the pre-64 standard grade rifles.