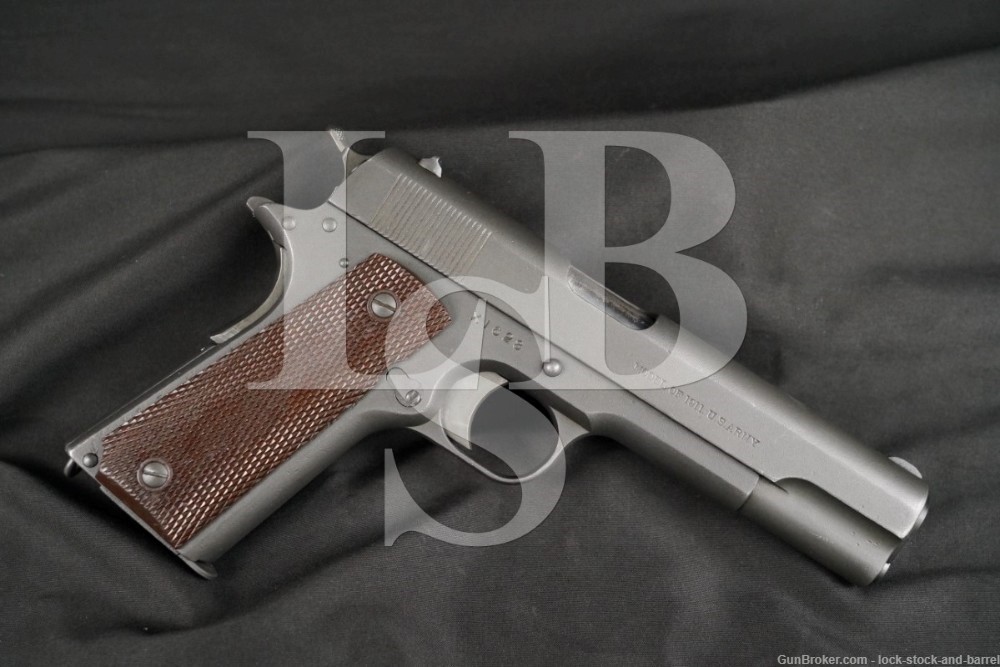 Serial Number: X1628 (this is a replacement serial number applied by Augusta Arsenal between 1925 and 1953)

Year of Manufacture: The frame was originally made between 1911 and 1917.

Bore Condition: The barrel is semi-bright with sharp rifling. There is some scattered minor erosion in the bore.

Overall Condition: This pistol retains about 96% of its current metal finish. The finish is generally strong throughout. There are some scattered light nicks and scuffs. The action shows operational wear. There are scattered nicks and light erosion under the finish. There is more notable erosion and pitting under the finish on the frame which is mostly covered by the grips when they are installed. The screw heads range from sharp to tool marked with strong slots. The markings range from clear to worn and incomplete. Overall, this pistol is in about Very Good condition as refinished.

Box, Paperwork & Accessories: This pistol comes with a single 7-round magazine marked “R” on the top of the floorplate. The magazine has light operational wear, some minor erosion under the finish, intact feed lips and a strong spring.

This is a U. S. Government marked Colt 1911 pistol which will be an intriguing piece for collectors. The pistol’s frame has a replacement serial number which was assigned to Augusta Arsenal. In 1924, U.S. arsenals were instructed to keep Model 1911 pistols which had missing or defaced serial numbers until they accumulated a sufficient amount to be worth re-numbering them. New numbers with X-prefixes were assigned to the various arsenals and this process continued into the 1950s. This pistol’s frame was originally made between 1911 and 1917 based on its “R” assembler’s mark and it has a quite early slide, produced before the 1913 patent was added to the slide legend. The pistol has been refinished, so it looks great for its age. This is a neat example of the U.S. Model of 1911 which will add to your collection, especially if you’ve been looking for once of these scarce replacement numbered guns. Please see our photos and good luck!