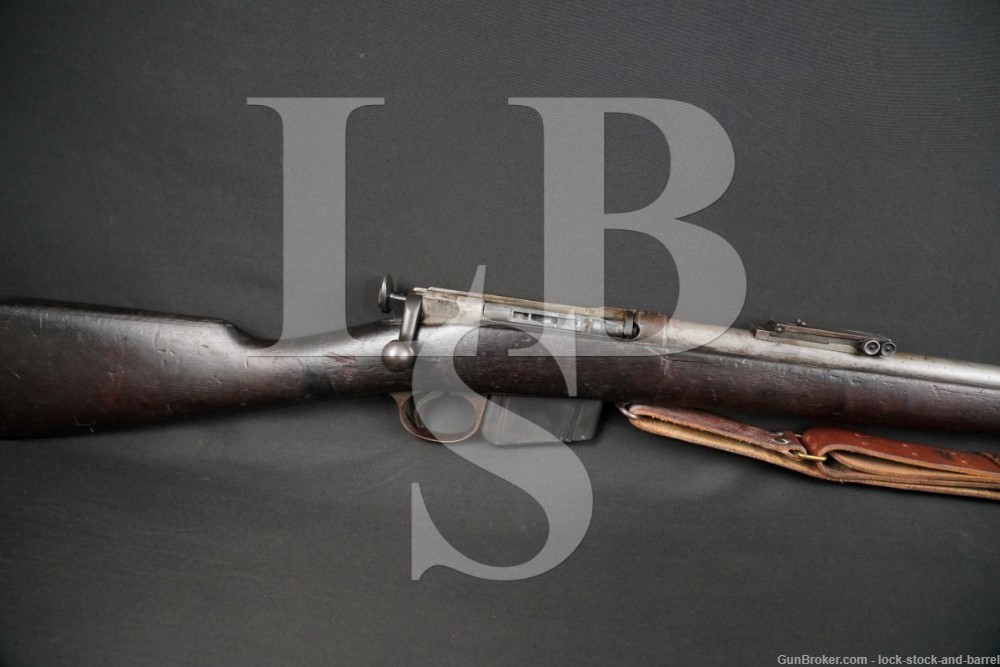 Stock Configuration & Condition: The full length walnut stock has two barrel bands, the forward band has a sling swivel, found again on the magazine floorplate. There are some scattered compressions, dings into the wood, scratches, scrapes, and areas of oil staining. Some of the marks have damaged or removed portions of surface wood, the majority have colored with age. There are some little chips on the edges of the cleaning rod slot. There are some scattered handling marks. The LOP measures 13 3/8” from the front of the trigger to the back of the carbine-style butt plate. The plate has some scattered finish loss, oxidation, nicks, scratches, and areas of patina. The stock rates in about Fine overall condition as Antique.

Bore Condition: The bore is semi-bright and the rifling is sharp. There are heavy marks on the exterior of the barrel that have caused bumps in the bore at the muzzle. There are a few areas of minor erosion and there are a couple of scabs in the bore.

Overall Condition: This rifle retains about 15% of its metal finish. The extractor is missing from the bolt. The majority of the finish has been lost and the metal is bright. There are areas of erosion and dark discoloration from previous oxidation. There are some scattered spots of oxidation. There are some heavy marks into the metal on the barrel in front of the nosecap of the stock. There are some scattered scratches, scrapes, scuffs, nicks, and areas of patina. The most noticeable remaining finish is on the bolt assembly, bottom metal assembly, and areas that are close to the stockline. The screw head slots range from sharp to lightly tooled. The markings are clear. Overall, this rifle rates in about Very Good condition.

Mechanics: The extractor is missing from the bolt but the action otherwise functions correctly. The bolt features a half-cock safety, the rifle has a removable magazine and the trigger pull is smooth. We have not fired this rifle. As with all previously owned firearms, a thorough cleaning may be necessary to meet your maintenance standards.

Box, Paperwork & Accessories: Included is one 5-round magazine and a leather sling.

Our Assessment: This is a Remington Model 1885 Lee rifle which was made for the U.S. Navy. The 1885 is the last of the Lee rifles which were designed by James Paris Lee. Mr. Lee had originally began production of his Model 1879 and contracted with the Sharps Rifle Company to produce the rifles but they discontinued all operations in 1881 and Remington got the tooling and licensing to produce rifles. The 1885 has numerous improvements over the old models including a relocated bolt handle, improved bolt head, and a magazine that could now hold cartridges securely without the use of a sliding catch at the nose. The rifles were made in .45-70 Government for Army and Navy contracts and .43 Spanish for export sales. In 1892 the U.S. Government chose to adopt the Krag and the Remington-Lee fell by the wayside. Only 1,500 were made for the Navy and this is a great opportunity to add one to your collection. Please see our photos and good luck!