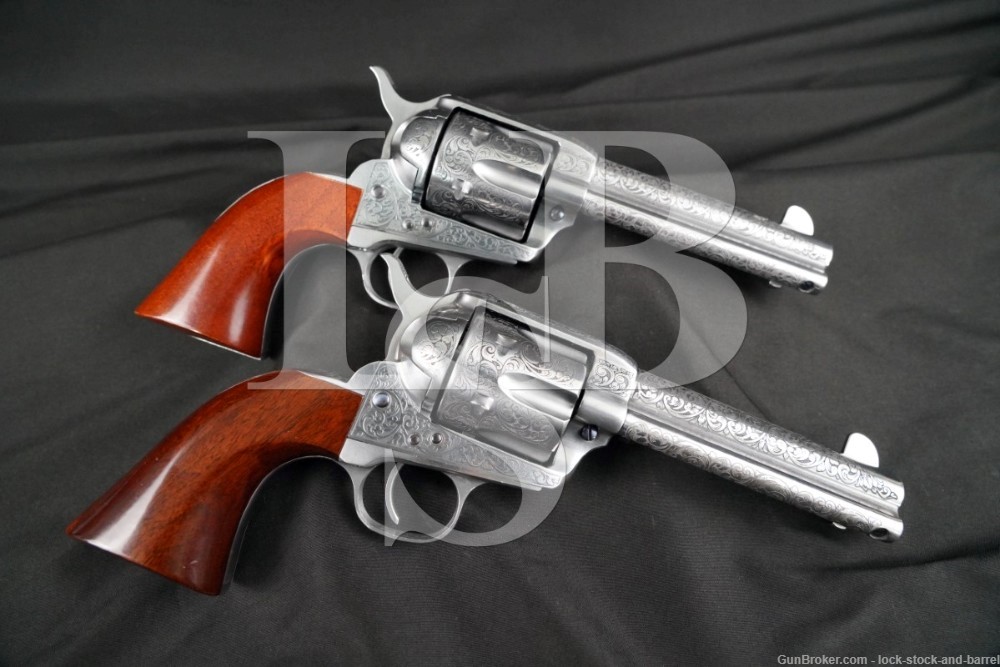 Action Type: A pair of Single-Action Revolvers with Side-Loaded 6-Round Cylinders

Markings: The two revolvers have identical markings with the exception of the serial numbers. The guns are covered in floral scroll style laser engravings. The left side of the frame is marked “PAT. SEPT. 19. 1871 / PAT. JULY. 2. 1872”. The bottom of the frame is marked with the respective serial numbers. The front of the frame, under the cylinder pin, is marked with the Uberti logo and “1518” on both revolvers. The lower left portion of the barrel is marked “A. UBERTI-ITALY”. The upper left portion is marked “CAL. 45 COLT”. The top of the barrel is marked “TAYLOR’S & CO. WINCHESTER VA – A. UBERTI ITALY”. The side-loading gates feature a barcode and the rear end of each gun’s cylinder is serial matched and has Italian proof marks.

Sights/ Optics: The front sight is a blade and the rear sight is a square-notch integral to the top-strap.

Stock Configuration & Condition/ Grip: The guns both have smooth wood grips. Both guns have grips with only light handling marks and lack any notable defects. There are no chips or cracks. Overall, the grip on each gun is in Fine-Excellent condition.

Bore Condition: The bores on both guns are mostly bright with sharp rifling. There is light erosion concentrated in the grooves of both revolvers.

Overall Condition: The revolvers both retain about 95% of their respective metal finishes. The guns have some light handling marks and scuffs but lack any notable defects. The markings remain clear on both revolvers. The screwheads are unmarred and serviceable on both guns. Overall, the revolvers are both in Fine condition.

Mechanics: The action functions correctly on both revolvers. They both have three clicks which engage normally. We have not fired either of the revolvers. As with all used firearms, a thorough cleaning may be necessary to meet your maintenance requirements.

Our Assessment: This is a gorgeous pair of reproduction Colt Single-Action Army Revolvers (SAA) which was manufactured by Aldo Uberti of Gardone, V.T.  a suburb of Brescia, Italy. The guns have intricate engravings, only light handling marks and they both remain mechanically sound. They are a fitting tribute to the iconic handgun that has come to symbolize the epoch of the Wild West. Indeed, for fans of the Colt SAA and luxurious firearms writ-large these are a perfect pair. Good luck on your bid!