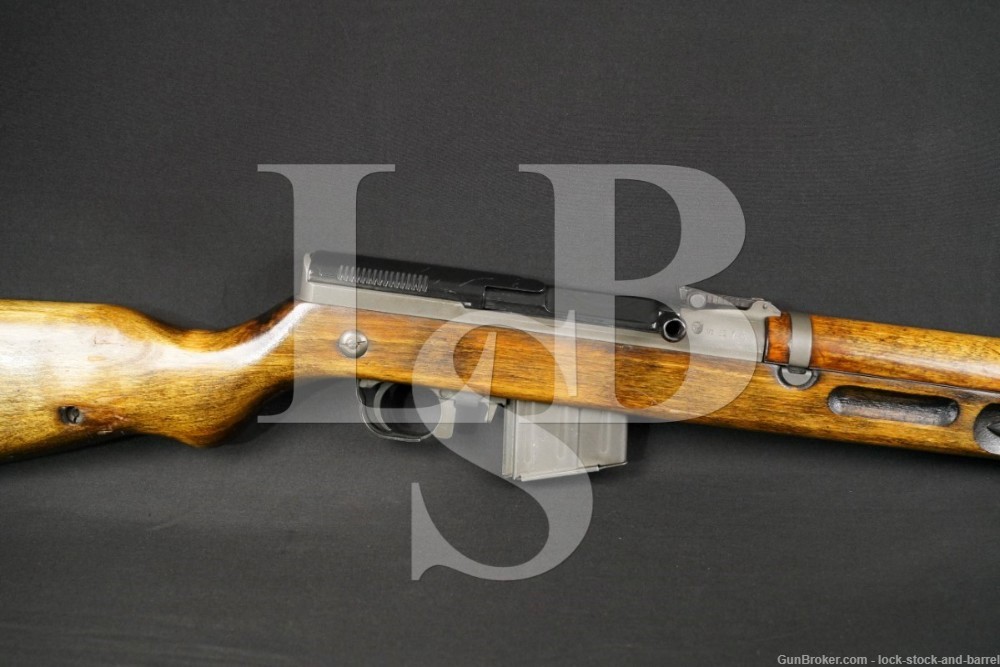 Sights / Optics: The front sight is a bladed post set under a protective hood. The rear sight is a “U” notched blade attached to a sliding escalator assembly that is marked from “1-9”.

Stock Configuration & Condition: The two piece wood stock has a pistol grip, finger grooves, metal nosecap with bayonet base, cut out for the attached folding bayonet, through bolt, sling well with sling bar, and a detachable buttplate. A storage compartment is under the buttplate. The wood shows scrapes, scratches and compression marks.  The LOP measures 13 1/4 inches from the front of the trigger to the back of the butt plate. The stock rates in about Very Good Plus overall condition as refinished.

Type of Finish: Parkerized. The bolt body & top cover have been finished with Gun Paint.

Bore Condition: The bore is bright and the rifling is deep. There is light fouling in the grooves which should clean up. There is no visible erosion.

Overall Condition: This rifle retains about 93% of its metal finish, as refinished. The bolt body & top cover have been finished with gun paint. The metal shows several scuffs, scrapes and scratches. The markings are deep. Overall, this rifle rates in about Very Good Plus to Fine condition, as refinished.

Mechanics: The action functions correctly. We did not fire this rifle. As with all used firearms, a thorough cleaning may be necessary to meet your maintenance requirements.
The bayonet locks into place correctly.

Box, Paperwork & Accessories: This rifle comes with a 10 round 7.62x39mm magazine. The original 7.62x45mm magazines have a different profile. It shows scrapes and areas of thinning.

Our Assessment: The Czechoslovakian VZ 52/57 started life as a VZ 52 Rifle chambered in 7.62×45mm. It was Arsenal converted to fire the 7.62x39mm cartridge which is readily available; 7.62×45 is hard to find. These are tough Czech rifles that are scarce due to limited availability. These are quite distinctive as they use a metal & wood handguard and a side mounted bayonet. This is a good looking semi auto that should keep you smiling at the range. It will also turn some heads once you extend the side mounted bayonet. Good luck.