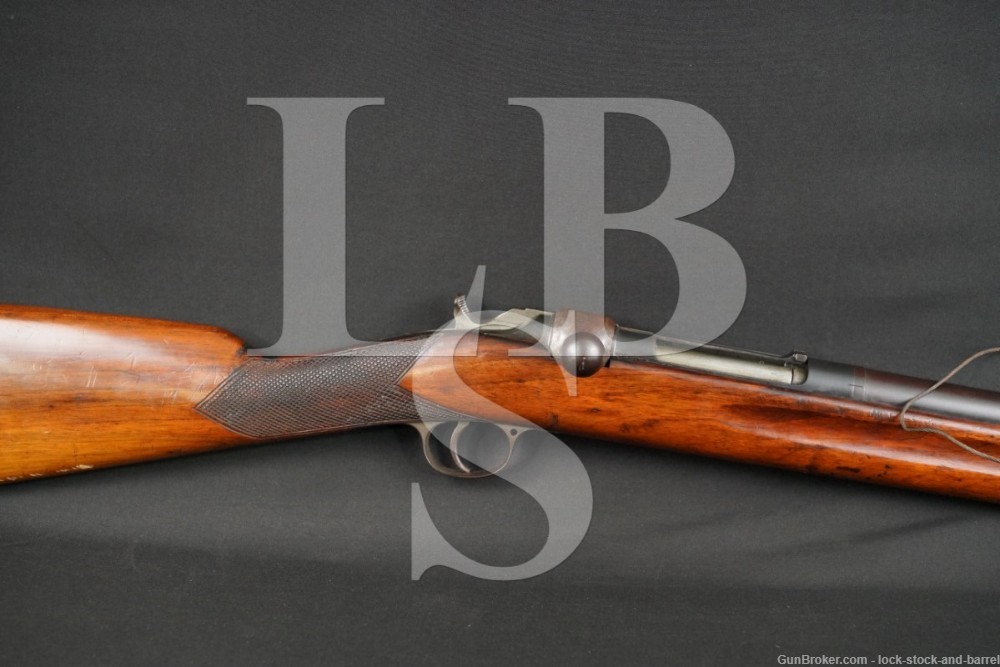 Make: Kongsberg Vapenfabrikk
Model: Converted Jarmann M1884/87 Harpoon Gun
Serial Number: 9867
Year of Manufacture: Ca. 1884-1894
Caliber: 10.15x61R Blank Propelled Harpoon
Action Type: Bolt Action Harpoon Gun
Markings: The serial number is marked on the left of the receiver, the barrel shank, the left of the bolt, the bottom of the bolt handle and the bottom of the striker assembly. There is a crowned “K” on the top of the chamber ring and a crowned “S” on the left of the barrel.
Barrel Length: 19 3/4″
Sights / Optics: The front sight is a blade fixed to the front of the barrel. The rear sight is a groove in the top of the extractor.
Stock Configuration & Condition: The stock is one-piece walnut with finger-grooved forend, checkered straight wrist, straight comb and a large brass buttplate. The stock has scattered nicks, dings, scuffs and scratches. The checkering is well defined. There are no chips or cracks. The LOP measures 14″ from the front of the trigger to the back of the buttplate. The plate is roughly cast with scattered wear and discoloration. Overall, the stock is in Very Good condition as Antique.
Type of Finish: Blued
Finish Originality: Refinished
Bore Condition: The bore is mostly bright with sharp rifling. There is infrequent light erosion in the bore.
Overall Condition: This rifle retains about 60% of its current metal finish. The balance is mostly in evenly scattered light surface erosion and areas gone to a light patina. There are some light nicks, scuffs and scratches. The action shows operational wear. The screw heads are tool marked with strong slots. The markings are clear. Overall, this rifle is in Fine condition as converted Antique.
Mechanics: The action functions correctly, however the magazine disconnect has been deactivated with the lifter stuck in the up position, for use as a single-shot only. We were notable to inspect the magazine assembly to ensure that it is present or functional. We did not fire this rifle. As with all used firearms, a thorough cleaning may be necessary to meet your maintenance requirements.
Box, Paperwork & Accessories: This rifle comes with a single harpoon.
Our Assessment: Jacob Smith Jarmann designed a rifle which would leapfrog Norway’s military from single-shot black powder rifles to repeating smokeless arms. The original design was a single-shot but a magazine assembly, which may have been borrowed from the Kropatschek, would turn the rifles into repeaters. It would not be long before the guns were replaced by the Krag-Jorgensen. More of them would likely have languished to be destroyed by the invading Germans in 1940, but in the late 19th century Scandinavia would see the height of their whaling industry, which required a significant number of harpoon and line-throwing guns. Many of the Jarmann rifles would be converted for this purpose and this is one such example. Complete with a single harpoon, this is nice example and for collectors of Scandinavian military rifles, it is an opportunity to score a scarce Jarmann. Despite some 30,000 produced, conversions such as this account for the great majority of existing examples as all remaining in Norwegian inventory were destroyed following the German invasion. Please see our photos and good luck!