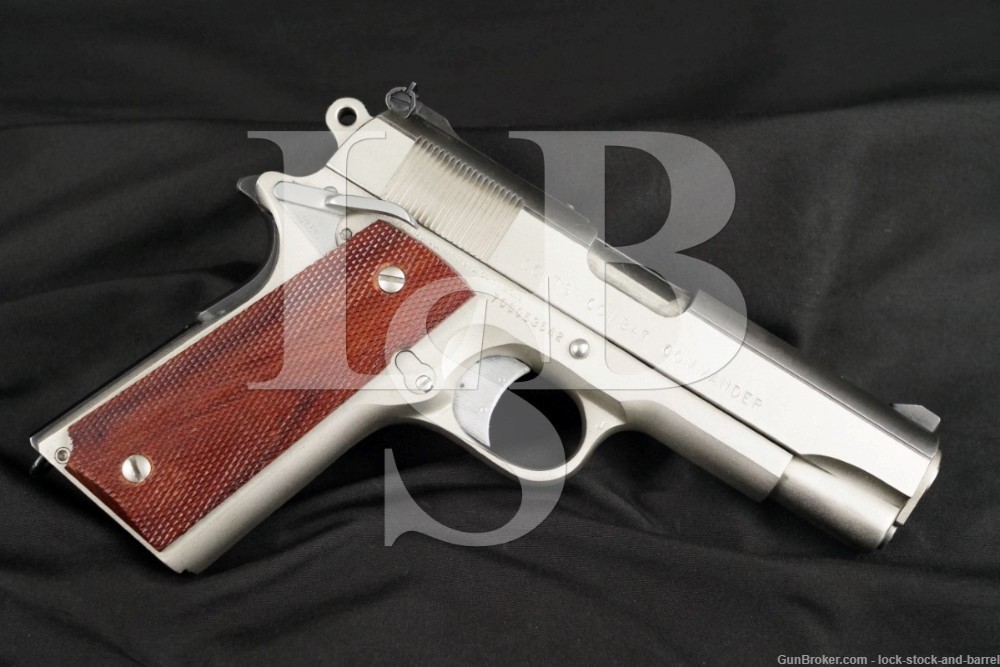 Make: Colt, the ambidextrous safety is marked “A.D. SWENSON”, the replacement sights, especially the small “H”-marked medallion, are consistent with Swenson’s work, but the gun is not further marked and there is no documentation of who performed the customization.

Sights / Optics: The front sight is an after-market serrated, ramped blade fixed to the front of the slide. The top of the slide behind the ejection port has been inlet for a S&W micrometer adjustable square-notch rear sight.

Stock Configuration & Condition: The grips are two-piece checkered wood with a relief-cut behind the magazine release on the left side. There are some light tool marks around the grip screws and a few other minor marks. The checkering is generally well defined. There are no chips or cracks. Overall, the grips are in Very Good-plus condition as not original to the gun.

Finish Originality: Remaining nickel finish is Original, the black paint was likely applied to the top of the slide when the sights were installed. The mainspring housing, trigger, sights, grip safety and thumb safety are not original to the gun.

Overall Condition: This pistol retains about 93% of its metal finish. There is some scattered minor wear in the black finish on the top of the slide. The nickel surfaces show some scattered light scuffs and scratches, mostly not through the finish. There are two small marks on the right of the trigger which is consistent with a previously installed trigger shoe. The action shows light operational wear. There is a light “idiot mark” under the slide stop. The action has light operational wear. The screw heads are sharp. The markings are clear. Overall, this pistol is in Very Good-Fine condition as customized.

Mechanics: The action functions correctly. The slide has minor play to the frame and the trigger is crisp. We did not fire this pistol. As with all used firearms, a thorough cleaning may be necessary to meet your maintenance standards.

Box, Paperwork & Accessories: None. Please note, no magazine is included with this pistol.

Our Assessment: Introduced by Colt as a lighter-weight version of the 1911, the smaller size of the Commander was popular and soon they were offered in a number of variations including different frame materials and calibers. While the original development centered on an aluminum-frame 9mm as a candidate for US Military post-war officer’s pistols, the steel frame .45 Commanders such as this one are what most people think of when they think of “The Commander”.

This example has been customized with adjustable sights, ambidextrous thumb safety, and a smooth steel mainspring housing. The pistol was originally all Satin Nickel finished but the top of the slide is black with blued finish on the grip safety and mainspring housing, giving the pistol a distinctive two-tone appearance. The installed S&W rear sight is consistent with that of Swenson, especially with the small “H”-marked medallion. We have seen previously documented Swenson custom pieces which had the original customer’s last initial marked on such medallions. There is no documentation or marking to conclusively prove that he performed the work. This would make a fantastic defensive pistol, but it would also make a collector quite happy and make a great “BBQ-gun” for any collection. Please see our photos and good luck!