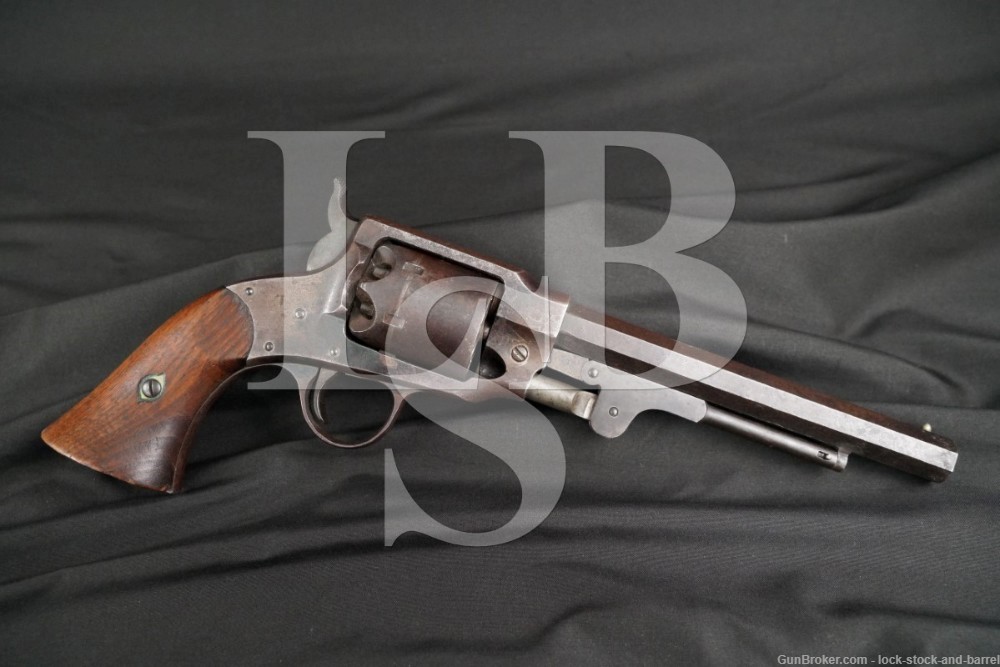 Year of Manufacture: Circa 1865, Antique

Sights/ Optics: The front sight is a metallic bead fixed by the muzzle. The rear sight is a “V”-notch integral to the top-strap.

Stock Configuration & Condition/ Grip: The grip panels are two-piece wood. The grips have light-moderate handling marks, nicks and scuffs. The wood is moderately worn at the bottom of the left panel with a small chip on the lower rear portion and there is a light nick at the front lower portion of the right panel. Also, there are some light nicks at the top of each panel where they meet the frame. Overall, the grips are in Very Good condition for Antiques.

Bore Condition: The bore is semi-bright with mostly sharp rifling. There are a few scattered spots of light pitting and light erosion concentrated in the grooves.

Overall Condition: The revolver retains about 5% of its metal finish. There is some surviving bluing on the frame, but most of the gun’s finish has worn off. The gun is coated in light surface oxidation and it has taken a patina color. This revolver has some light handling marks, nicks and scuffs. Notably, there is light handling wear along the leading edges and a moderate turn-line on the cylinder. The markings remain clear. The screwheads are lightly tooled but they remain serviceable. Overall, the revolver is in Poor condition due to mechanical issues.

Mechanics: When the hammer is cocked it does not cycle the cylinder. There is an issue with the mainspring and the hammer does not always fully cock. We have not fired this revolver. As with all used firearms, a thorough cleaning may be necessary to meet your maintenance requirements.

Our Assessment: The Rogers & Spencer Army Model Revolver was designed for service in the American Civil War. The small company secured a contract in November of 1864 to fabricate 5,000 units for service with the U.S. Military. Unfortunately, only 1,500 had been made before the war ended with the rest supplied by September of 1865. It appears that these revolvers were never pressed into service and in 1901 Francis Bannerman, a prominent arms dealer in the late 19th and early 20th centuries, acquired nearly the entire stockpile of surplus Rogers & Spencer Revolvers and sold them commercially. It is a well constructed revolver, but simply arrived on the scene at an inopportune time.

This particular specimen is serial number 2838 out of 5,000, it was fabricated after the Civil War had ended. The gun has an issue with the mainspring and the cylinder does not cycle when the hammer is cocked. Despite this, the gun remains a rare collectible and with some restorative work can certainly be returned to its former glory. This is a great option for historical firearms collectors. Good luck on your bid!