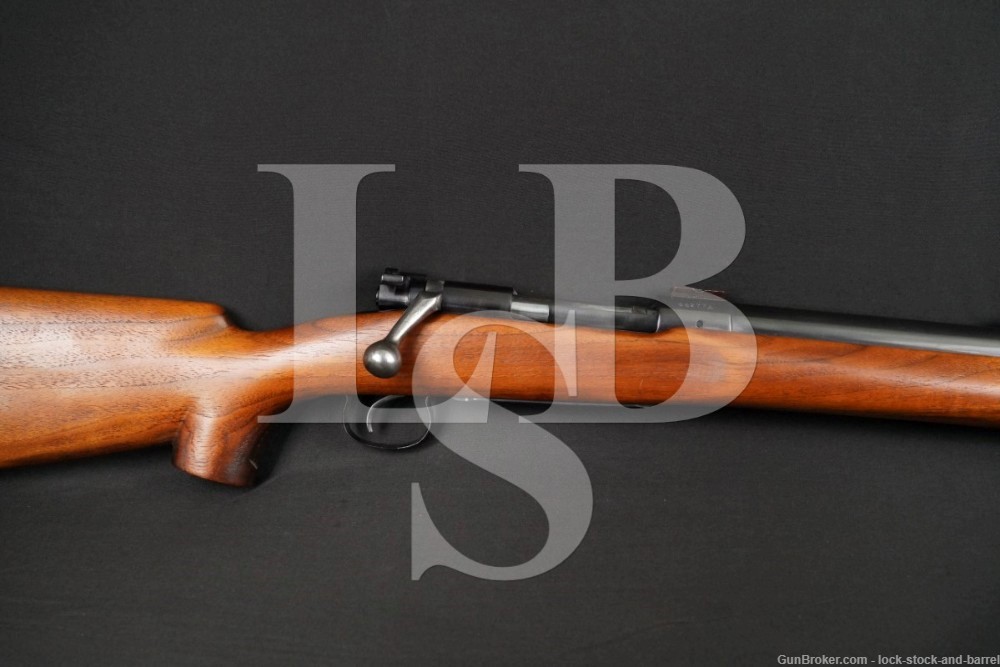 Year of Manufacture: 1935, we do know know when the rifle was customized.

Sights / Optics: There are no iron sights. The left side of the receiver has a pair of drilled and tapped holes at the rear. The top of the barrel has a male dovetail base towards the rear and there is a second installed on the chamber ring.

Stock Configuration & Condition: The stock is a one-piece smooth walnut with a pistol grip, straight comb, beavertail forend, inlaid accessory rail, and checkered shotgun style buttplate. There are some scattered compressions, draglines, and a few dings into the wood. The deepest mark is on the front of the pistol grip. There are no chips or cracks. There are scattered light handling marks. The LOP measures 13 1/4″ from the front of the trigger to the back of the buttplate. The plate has some scattered light oxidation and there is finish loss on the edges. Overall, the stock is in about Fine condition.

Finish Originality: The receiver has its Original finish. The barrel is aftermarket.

Bore Condition: The bore is semi-bright and the rifling is sharp where not interrupted by erosion. There are areas of erosion and light pitting in the bore.

Mechanics: If retracted with enough force, the bolt will come out of the receiver. The action otherwise functions correctly. We did not fire this rifle. As with all used firearms, a thorough cleaning may be necessary to meet your maintenance requirements.

Our Assessment: Winchester’s Model 54 rifle was made from 1925-1936, with a carbine offered in 1927 and an improved version offered in 1930 which had a chrome-moly barrel instead of the earlier nickel-steel. The rifle was Winchester’s only bolt action centerfire rifle at the time, and ceased production when the legendary Model 70 became available in 1937. This example was made in 1935 and has since been installed with a new R.E. Morgan barrel chambered for .219 Donaldson Wasp. The .219 Donaldson Wasp cartridge was developed during the late 1930s by Harvey Donaldson, and is derived from the .219 Zipper case. Once popular among match shooters in the 1940s, it has since fallen by the wayside in favor of newer developments. This rifle shows wear consistent with its age but could still make for a nice target shooting rifle for one lucky winner. Please see our photos and good luck!