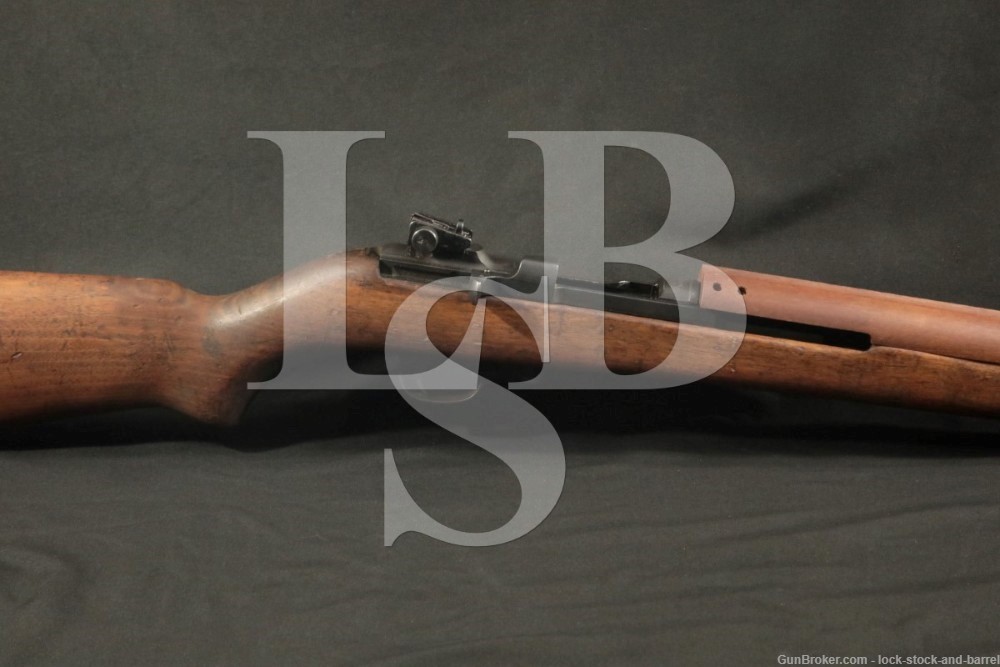 Sights / Optics: The front sight is missing. The rear sight is a commercially made Type II style adjustable aperture.

Stock Configuration & Condition: The stock is missing its  buttplate, recoil plate assembly (plate, screw & nut) and barrel band retaining spring. The action is held in the stock by the barrel band.
The wood stock has a pistol grip, Type III barrel band with sling loop & bayonet lug, sling well and sling pass through. The wood shows numerous scrapes, scratches and compression marks. The wood has been oiled. The LOP measures 13 1/4 inches from the front of the trigger to the back of the buttplate. The stock rates in about Good overall condition.

Bore Condition: The muzzle and grooves are gray. The rifling is deep. There is fouling and erosion at the muzzle and in the grooves. The fouling should clean up a bit. The bore shows an M.E. of .07.

Overall Condition: This rifle retains about 90% of its metal finish as refinished. The metal shows scrapes, scratches, and discoloration from oxidation. The trigger guard shows some surface erosion and has been touched up with a spot of paint. The receiver and bolt show operational wear. Most of the markings are deep. Overall, this rifle rates in about Good condition. It would rate higher if it were a complete rifle.

Mechanics:  The front sight is missing. The stock is missing its buttplate, recoil plate assembly and barrel band retaining spring. The action is held in the stock by the barrel band.
The action functions correctly. We did not fire this rifle. As with all used firearms, a thorough cleaning may be necessary to meet your maintenance requirements.

This Winchester M1 Carbine was made back in 1944. After WWII it served for a U.S. friendly country and was eventually imported back into the U.S. for sales to the civilian market. It is marked accordingly on the barrel. It has been rebuilt using a mix of USGI parts but still retains its original Winchester marked barrel. The rifle is missing its front sight, buttplate, recoil plate assembly and barrel band retaining spring. These small parts are available online. Good luck.