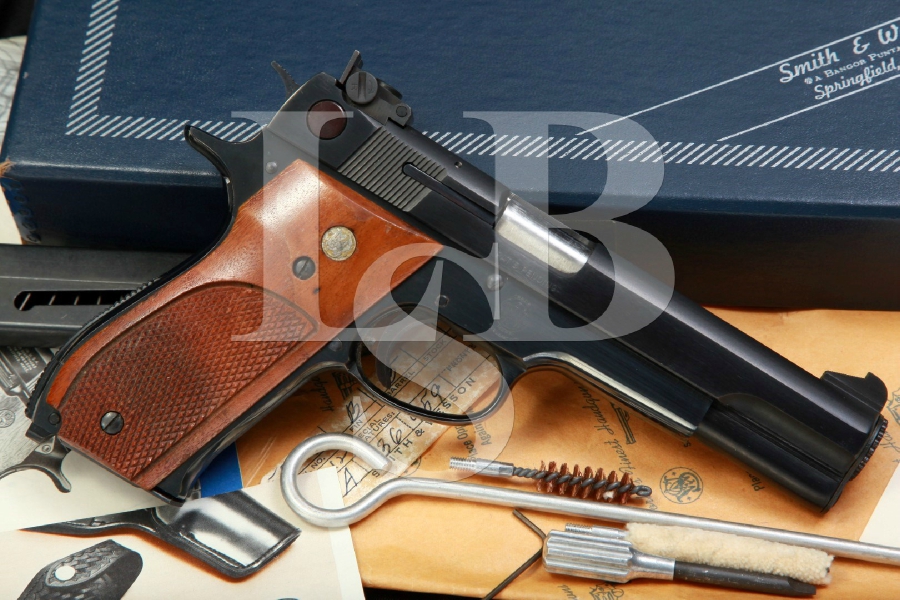 Stock Configuration & Condition: The two piece checkered walnut grips sport an S&W medallion on each panel. Evidence of use is apparent on both grip panels and two patches of finish loss are visible at the top of the right panel. The checkering is sharp on the left panel and the points on the right panel are flattened from use. The grips rate in about Very Good to Fine overall condition.

Type of Finish: The pistol is blue with a matte finish on the top of the slide.

Overall Condition: This handgun retains about 99% of its metal finish. Only very light marks are visible on the pistol, with scattered pin sized marks in the back strap. The grooves in the hammer and trigger are sharp. The screw heads are sharp. The markings are clear. Overall, this handgun rates in about Excellent condition.

Mechanics: The action functions correctly. The Model 52-2 features an over-travel adjustment screw. We did not fire this handgun.

Box, Paperwork & Accessories: The pistol comes with two 5-shot magazines. Both are marked “S&W” on the floor plates, show mild evidence of use and are in Excellent condition. The pistol comes in a two piece dark blue Smith and Wesson box with a silver S&W logo, trim and “Smith & Wesson / A Bangor Punta Company / Springfield, Mass.” The top corners are moderately frayed and the lid exhibits light marks. Remnants of the tape which originally sealed the box are still present as are the metal corner braces. A label on the right end of the lid reflects the model of the pistol and glue residue from another label is present on the left end. The interior of the box is made of corrugated cardboard, cut into compartments for two magazines and the pistol, topped in the same blue cardboard which makes up the exterior of the box. The box is in Fine condition. A plastic envelope containing a cleaning rod, bore brush, bore mop, screwdriver and hex wrench is contained in the box, all in Excellent condition. An S&W Ammunition pamphlet, two identical caution cards, a holster advertisement and an instruction sheet, all in Fine condition are included. Also present is an S&W label, fitting the dimensions of the glue patch, which is marked with the model and serial number of the pistol.

Our Assessment: The Smith and Wesson Model 52 was introduced in 1961 as a match pistol derived from the Smith & Wesson Model 39. The first version was known simply as the Model 52 and retained the basic trigger mechanism of the Model 39, with the Double-Action disconnector removed, allowing the pistol to be fired in Single action only. In 1963 the Model 52-1 was introduced with a separately developed single-action trigger system and was manufactured until 1970, when it was succeeded by the Model 52-2. Changes to the 52-2 included an improved extractor. In 1992, the 30 year-old machinery used to make the Model 52 broke down and Smith & Wesson decided against replacing it, thus the gun was discontinued. Per “The Standard Catalog of Smith & Wesson” by Supica and Nahas: “The last model 52-2 bore serial number “TZW9149” and was completed on July 23, 1993 and delivered to the S&W gun vault.” The 52-2 is designed to fire .38 S&W Special Wadcutter rounds only. This is just a rare and fascinating gun. No S&W collection should be without a Model 52-2.