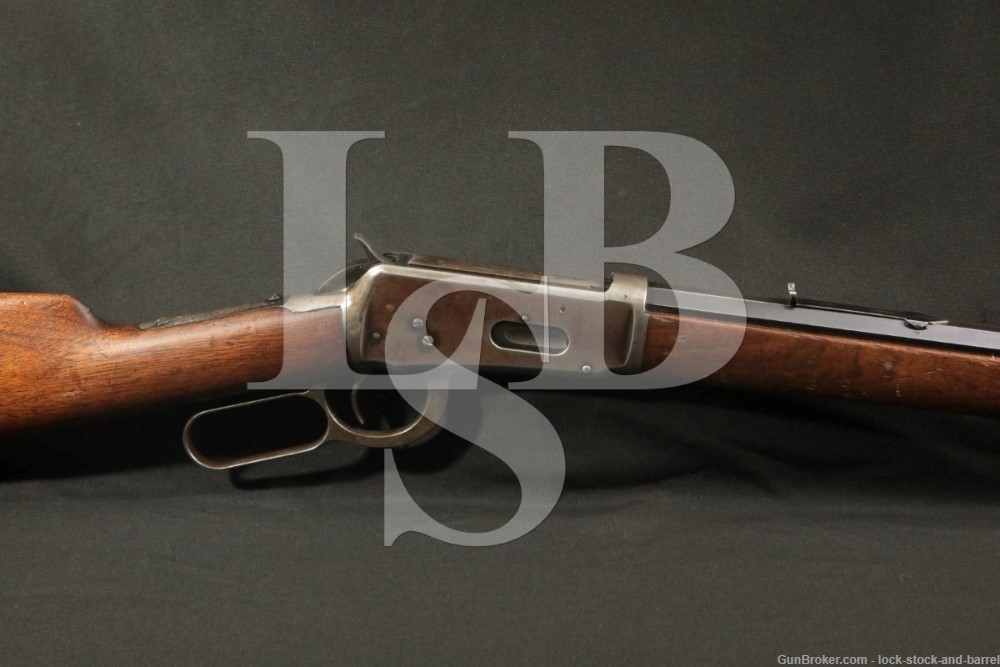 Markings: The left shoulder of the barrel is marked “-NICKEL STEEL BARREL- / ESPECIALLY FOR SMOKELESS POWDER”, the top is marked “MANUFACTURED BY THE WINCHESTER REPEATING ARMS CO. / NEW HAVEN. CONN. U.S.A.” in front of the rear sight and “30 W.C.F.” at the chamber. The front underside of the receiver is marked “54264” and there is a diamond in front of the trigger. The top tang is marked “MODEL 1894 / -WINCHESTER- / PAT. AUG. 21. 1894”.

Sights / Optics: The front sight is a replaced Lyman blade, set into a dovetail slot. The sight is marked “LYMAN” and with the patent information. The rear sight is a re-shaped v-notch leaf sight, missing the elevator and set into the rear dovetail. The upper tang is factory drilled and tapped for the mounting of a tang sight, none is provided, but it looks as though one was on the rifle for many years and the forward screw is from that sight.

Stock Configuration & Condition: The stocks are 2-piece smooth walnut with capped forend, straight grip, straight comb and steel crescent buttplate. The stocks have scattered nicks, dings, scuffs and scratches. There is some age shrinking at the toe and chips throughout. A sliver is missing to the left of the upper tang. The wood does not look to have been sanded or refinished. The forend is a bit more surface battered than the stock. There are no cracks and the wood to metal fit is very good. The LOP measures 13″ from the front of the trigger to the back of the buttplate. The plate has mostly worn to white with some scattered light wear and surface oxidation. Overall, the stocks are in about Good to Very Good condition.

Bore Condition: The bore is light gray with well-defined rifling. There is some scattered light erosion in the bore, mostly in the grooves. We would rate it consistent with the exterior of the rifle.

Overall Condition: This rifle retains about 60% of its metal finish. The wear to this rifle is honest and not offensive. There is thinning and a drift to a light patina on the frame. A tang sight has protected the finish on the upper tang, where more remains than the balance of the area. The barrel and tube have general edge wear, a few light dings and mild patina forming where finish was lost. The screw heads range from sharp to tool marked with strong slots. At least the buttplate screws and one tang screw are replacements. The markings are clear. Overall, this rifle is in Very Good+ condition.

Mechanics: The action functions correctly. The hammer has a half-cock safety and there is a lever safety. The trigger is crisp. We did not fire this rifle. As with all used firearms, a thorough cleaning may be necessary to meet your maintenance standards.

Our Assessment: The Winchester 1894 was the first Winchester lever action designed for smokeless powder. It was designed by John Browning and, like all of his designs, was incredibly strong, reliable and operationally simple. Not only was it a success, but as of 1983 it held the record for the best-selling high powered rifle in U.S. history.

This 1894 is one for your collection. It was produced in the 3rd year of production and minus the honest wear, screws and sights, it is how it left the factory in 1896. The 1894 and specifically THIS 1894 are important guns for a Winchester collection. Finding one this early, in this condition and in this configuration does not happen every day.