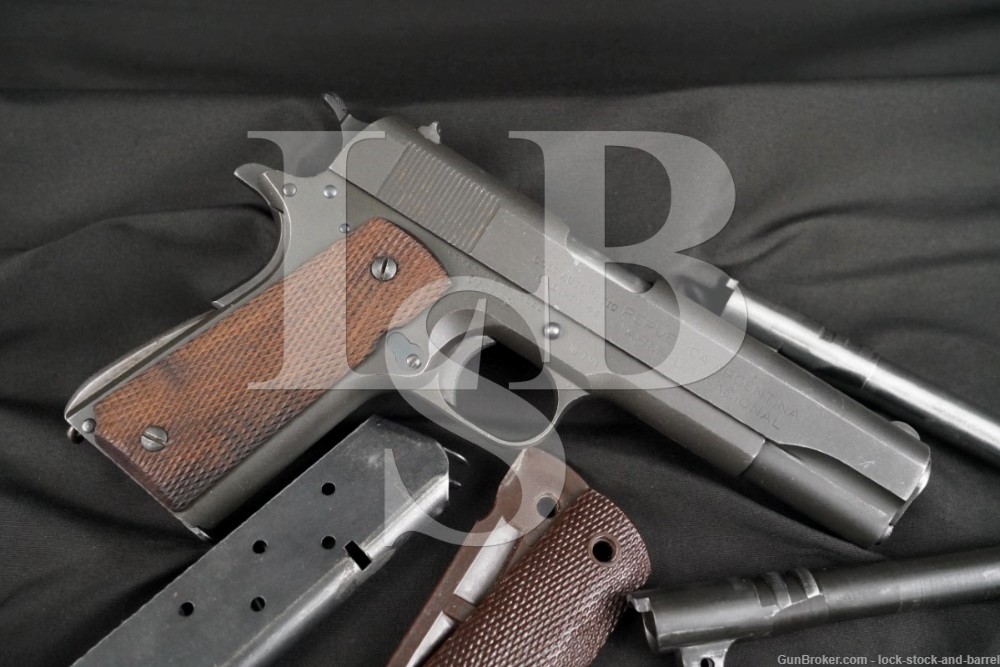 Stock Configuration & Condition: The installed grips are two-piece checkered walnut. The grips have light wear with thin finish and a few minor marks. The checkering is generally well defined. There are no chips or cracks. Overall, the grips are in Very Good condition.

Also included is a set of checkered brown plastic with reinforcement rings around the screw holes and reinforcement ribs on the interior. There are no Keyes fiber or other mold markings on the inside of the grips. The grips show light wear with some scattered light marks. The points of the checkers are blunt but overall the checkers are well defined. There are no chips or cracks. Overall, the additional grips are in Very Good condition.

Finish Originality: Refinished, likely Arsenal Refurbished. The slide is not original to the gun but is from the same Navy purchase.

Bore Condition: The bore of the installed barrel is bright with sharp rifling and no erosion.

One additional included barrel is in the white. It has bright lands with gray grooves, sharp rifling, and scattered light erosion in the grooves.

The additional barrel which is finished has a gray bore with well defined rifling and scattered light erosion.

Overall Condition: This pistol retains about 90% of its current metal finish. The finish is thinning at most edges. There are scattered minor nicks, scuffs and scratches throughout. There are infrequent spots of minor surface erosion, most notable on the left of the slide at the front. The grip areas show light handling wear and the action shows operational wear. The screw heads are tool marked with serviceable slots. The markings are generally clear, some are worn, but legible and the crest on the top of the slide is incomplete. Overall, this pistol is in about Very Good condition as refinished.

Box, Paperwork & Accessories: This pistol comes with a total of two 7-round magazines, two additional barrels and the additional grips as described. The magazines have scattered wear with intact feed lips and strong springs.

Our Assessment: In 1914, the Argentine military adopted the Colt M1911 as their standard military sidearm. Originally, Argentina contracted with Colt to produce the pistols, but only about 21,000 were procured from Colt. In 1923 they started a program of increasing the domestic production of their military equipment and in 1927, Argentina negotiated a contract with Colt to produce the design in their own country. Their original purchase was for 1,000 pistols, all in Colt’s normal Commercial Government Model serial range from C20001 to C21000, shipped through Britain to comply with Colt’s licensing agreement with Fabrique Nationale. A series of other purchases occurred including some made by the Argentine Navy. This pistol comes from a 1927 purchase of 150 pistols by the Armada Nacional, the National Navy of Argentina. The slide installed on this pistol is not original to the frame, but does come from the same purchase and the pistol’s parkerized finish was most likely applied by the Argentine Navy to make it more suitable for use in a role which would subject it to salt water. The pistol is in about Very Good condition as refinished with honest wear, a shootable bore and strong mechanics. It also comes with a brace of magazines, a pair of additional barrels as well as an additional set of grips. This is a nice example of one of the Argentine Navy’s purchase of Colt Government Model pistols and will make a great display with other Argentine handguns or in a 1911 collection. Please see our photos and good luck!